I'm trying to think of good 8-bit computer puzzle games to ensure that they get a fair showing. I can think of Deflector, but my head is otherwise blank! Any thoughts.

Are you talking about puzzlers that were exclusive to the 8-bit computers? Because I've played all the usual suspects like Puzznic and Plotting on the speccy. They were good versions too if I remember rightly.
If it's slower than me, dumber than me and it tastes good ... tough titty.
Top

Think ! On the speccy was pretty cool , infusion by incentive , and locomotion by mastertronic were also decent.
Luxor the moonprince - Doomguard Slayer
Top

I'd also give a shout to the brilliant Pi R Squared by Mind Games. You can read more about it here in my Retrogaming Times column:

E*Motion? Never owned it, played it a couple of times at a friend's house, not sure it classes as a puzzler.

I'd put a big shout out to Mindtrap on the Spectrum, it's a relatively unknown puzzler with 999,999 levels to complete, and I was quite pleased to admit, as a youngster, to reaching somewhere around level 127. I had pages and pages of level passwords written out for it. Also Peking, aka Mah Jong, had my dad hooked on the Spectrum for YEARS.

Probably one of the hardest 8-bit puzzler games was Logo on the Speccy, which I think was given away with YS. Great game, but I think I was a bit too young to really appreciate the mechanics of it. No one mentioned Mined-Out yet? Or the Non Compos Mentis games?

My first memories of Puzzle Games though, go back to Pelmanism on the TI-99/4A, by Markat Software. You know the one, turn over cards to find pairs... although technically that's 16-bit...

Its a fantastic game, push the boxes onto dots!

And by the way, Deflektor is misspelled.
Top

It also got an Atari 2600 conversion too. Speaking of the 2600 there is also the excellent Acid Drop too as well as older titles like Hunt & Score, Brain Games and Dice Puzzle.

There are a ton of 8-bit conversions of Klax.

yeah early 8-bit computer stuff usually exclusive. They might clash if we're doing a puzzle cover, but I want to at least try and get a nice balance across eras.

How about 'Bridge It' on the Amstrad. Terrible game but qualifies as a puzzler!
Top

Most of the ones I could think of have been mentioned so far. Zenji by Activision. Curse of Ra by Rainbow Arts.
Lie with passion and be forever damned...

Gem X not because of the anime women but because its a good puzzle game.. Still own my big boxed Commodore 64 Gem_X 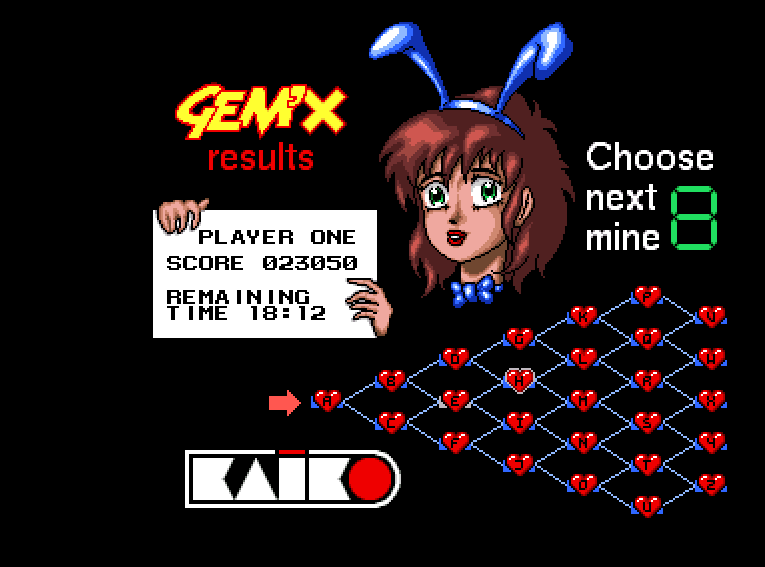 The puzzle part of Impossible Mission C= 64. And some of the rooms took a bit of thinking how to move the elevators around to get where you wanted.
Top

I've been a fan of Sensitive on the Commodore 64 ever since I first played it. It's a great puzzler with a heavy slice of dexterity required. I got through a fair few sheers of graph paper with this one.
Top

Another shout out for Mindtrap here. If you haven't played it, it's worth a look. The music is great, too.

Bombuzal is another great 8-bit puzzler.