Magical Drop III Plus(PSX) - Finaly managed to track this game down on the PSX this year. This game is basicly the japanese version (by far supiror to the other regions due to having a story and more gameplay modes) but translated in to 5 Europain langauges including English yey. This game also has a lot of fun gameplay modes, including a mario party style board game type mode which is cool. The gameplay is unqiue to this game and is a lot like coloumns but you have to re-arrange the gems instead of letting them fall. Worth checking out on MAME.

Neo Geo Battle Coliseum (PS2) - Take notes Capcom and let SNK show yo how to make a celebartion of their gaming years. (Anyone who has played Capcom Fighting Jam will know what I mean) Plays a lot like the orignal Marvel vs Capcom but less broken. The character design is great and the two "pro neo geo" characters created for this game are brillant as well as the other redawrn members of the SNk cast including a very new look bad ass Robert. This game is a lot of fun and the 40 characters in this game are pretty well balanced apart from mr. Big of course heh. I would recommend anyone to buy this when it comes out over here in blighty because it one of the best fighting games I've played in a long, long time.

Blazing Star (Neo Geo MVS) - Got this game last year with my newly aquired Neo Geo MVS 2 slot and it's f'ing great it really is. One of the coolest horizontal games I've ever played and it's also a very fun one to and I only paid Â£20 for it which to me seems like a bargin for one of the great game like this one. The atmposhere of the game is great and the game has lush graphics and sound and the gameplay is simply devine. Buy it!

AirRade Air (JAP PC) - I love this game. This is a Japanese Dojin Shump which means in english a Shareware Japanese PC Scrolling Shoot-em-up. This game is wacky and unique and it's damn hard but veyr, very fun with penty of stuff to unlock and do and it always keeps you on your toes with it's unique score machinics which include combo'ing enemies by punching one of them in to a whole crowd which is always fun to watch on screen. This game also has the best presention I've seen on a PC shmup with some of the best graphics and sound that I've ever seen. Check it out!

Makai Kingdom (PS2) - Brillant, Brillant SRPG style game by the masters of the SRPG Nippon Inch who are the people who made Disgaea. This game allows the player to create there own heroes and go in to an infinate amount of battles thus making this game pretty much endless. The game is increadbly fun and is very humourus in places and is well worth a look for anyone who likes RPG's of any kind because I know you won't be disapointed! 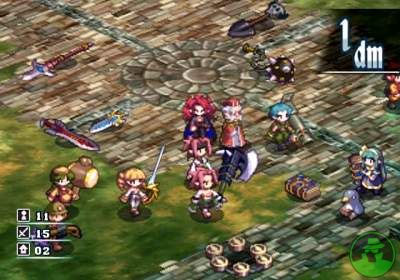 There were some good games amongst the crap in 2005 my top 5 in no particular order are.

In absolutely no order at all...

1. Heroes of the Pacific - Xbox

Very similar to Secret Weapons over Normandy. Simple to play and for some reason I kept getting drawn back to it despite playing through it several times.

The single player game is nothing special but I love this to bits online.

No surprise here. Theres not much I can say here that hasnt been said already.

I wasnt expecting much from this and was presently surprised by it.

I was genuinely disturbed when I first starting playing this. Unique in many ways. Still havent completed it yet though.....[/u]
Top

Finally bought myself a Japanese DC, and finally sampled the goodness these two brought. Never been a major shooter fan, not since those days when I spent many an hour on a C64 shooter (which I still cant figure out the name of!), but these two have completely changed my opinions on the genre.

Owned this since release, but never took the time to actually play the thing! Certainly wish I'd attempted it earlier.

Always wanted this, since way back at the time of release. Ended up purchasing the Jap version, and I've spent copious amounts of time with it already.

Games aquired last year would be... in no particular order...

Can I just add that have got Battlefield 2 - Modern Combat for the PS2 and boy is it a dissapointment!!

Have battlefield 2 for the PC and it totally rules on line, expected the same from BF2MC for ps2 and it sucz. The one player mode is basically a medal of honour clone!!!! The on line mode is marginally better but boy, have ps2 owners been bent over and nailed!! stick to the PC version!

On a different note, Have to agree with all that have voted for Resi Evil 4 on PS2. Totally rokz!!!
Retrotechy.
Zapp Brannigan Quote - You remind me of a younger me Fry, Not much younger mind, Perhaps even a little older...