- For Apple handheld apps, you do NOT need an iPhone—an iPod touch will do. You can get one for about £150 from Amazon.
- The App Store works on a straight payment system—in other words, if a game is 69p, that's what you pay. There's no pissing about with buying a fiver of credit and then working out how to spend it.

With so many threads going off the rails or springing up due to Apple's machine, I've created a dedicated thread to the best handheld I've ever owned.

Here's just a selection of what's currently getting playtime.

Stone Loops
Price: 59pence
Great variant on Zuma, which was itself a clone of the brilliant Puzzloop

FAST
Price: £1.19
Amazing looking shooter that plays like a cross between afterburner and Air Combat

Droplitz
Price: £1.19
Stupidly addictive puzzler by the Oliver Twins that's making me waste a lot of precious time. Plays like a cross between Pipemania and Downfall.

I Dig It
Price: 59 pence
Interesting variant on Mr Driller. You dig into the ground but must manage temperature, fuel and other bits and bobs.

From one of the other threads:

PapiJump Land (similar to Bounder, but tilt-based and more fun, £0.59)

Saucelifter (Choplifter, but with you piloting a tilt-based UFO and rescuing your alien chums, £1.19)

Spheroids (Asteroids wrapped around a sphere, £0.59)

Total cost of the above, if I've got my sums right: £23.25—about the same as a single DS game. And the above doesn't even mention my 'game of the year', Flight Control, which at 59p has managed to give me more game time than every single DS title I've ever owned.

EDIT: And in the latest issue's feedback thread, the mighty Stu Campbell reminded me of his rather spiffy new article on the iPod touch, which should give those considering the platform some serious food for thought.
iPhone/iPod/iPad game/app reviews: http://www.iphonetiny.com
Top

For me it would definitely be... 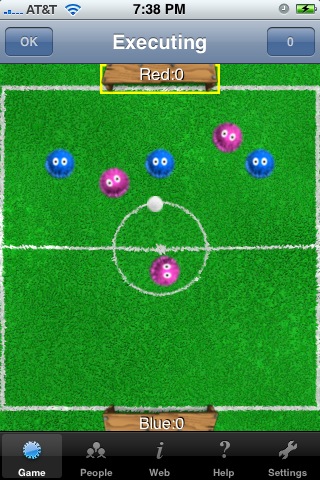 am also a big fan of these free time wasters...

iPint
Price: FREE
The game is so-so, but the virtual pint you get for winning is a joy. http://www.vectortanks.com/ - Vector Tanks - Battlezone remake. If only all remakes could be this good.

It's probably worth noting that Mobile 1Up's games have all received a rather drastic graphical update, since Nintendo objected to the original G+W App Store games.
iPhone/iPod/iPad game/app reviews: http://www.iphonetiny.com
Top

Rev. Stuart Campbell wrote:Mm. If you're planning on mostly using it as a games machine, 8GB is tons. That'll hold literally hundreds of games, and the interface is only designed to cope with about 160. Fill that and you'd still probably have about 4GB free on the side for music and video. (Though the apps limit is quite easy to get round anyway.) I've currently got 208 games on my Touch, occupying just over 2.9GB.

And remember, the PSP and DS come with basically zero onboard memory. If you wanted to have music and videos on your DS or PSP as well as games, you'd need to fork out for a memory card. A 16GB memory card bumps either of those up pretty close to the cost of the 16GB model of the iPod Touch.

Taking this out of the Issue 66 feedback........
Ok, am seriously thinking about this now (b*stards the lot of you)

Ive got about 20ish GB of music in WMA format and I believe if I put that through I-Tunes it will compress it some more - so I should be able to get a good chunk of my music on the 16GB - quick question, all of my music files have the album art embedded (using ID Tag software) - will these show up on the touch or will I have to get the album art again through I-Tunes?

May have to consider getting rid of my PSP collection to help fund this though (got about 6 games, a few movies and 5 mem cards with lots of things I would only list via PM!!)

Do you guys think emulation will ever appear? I remember the C64 emu thread recently but I think it didn't happen....
The dry fart for Barry MacDermot and all the cancer patients in the Glamorgan testicle ward
Top

If I were you, I'd churn out your WMA as MP3, not AAC, since it's more compatible with a bunch of things. If you use iTunes smart playlists, you can sync one of those with your iPod touch rather than everything. In my case, I just have a standard playlist called 'favourite albums' that I bung across and a smart playlist that shows everything that's not in that list. Simple enough management and it keeps down my full collection (80ish GB of ripped CDs) to something manageable and towards stuff I actually play. (You could, of course, also rate stuff and fling across high-rated tracks only.)

Album art—no idea how that'll survive a conversion. iTunes should be able to grab art from the store though, for most stuff, and you can always drag-and-drop for stuff it can't find.

As for emulation, it already exists. Sega's stuff is mostly MegaDrive emulation, and Frotz is a Z-machine interpreter, which is basically an emulator. There's also a Chip-8 one on the App Store.

I recently interviewed the C64 app guys and they think there are some specific things Apple rejected their app for, not the fact it was an emulator per se. The newly submitted version lacks BASIC for example, and makes it more obvious that the built-in 'store' is actually just a means of integrating further content from the App Store (in the form of officially licensed game packs). This is the kind of emulation you'll likely get in the future, but don't expect the kind of thing you see on your PC unless you 'jailbreak' your iPod touch (which is essentially the same as a PSP firmware hack, but comes with the same potential issues regarding bricking and software support).
iPhone/iPod/iPad game/app reviews: http://www.iphonetiny.com
Top

I must admit that this is mostly because i'm the developer; its my first iPhone game. I've submitted it to Apple and i'm waiting for them to approve it so wish me luck

I've bought/ downloaded quite a few over the last year ... some of my favourites are (which haven't already been mentioned in earlier posts):

As a bit of a pinball fan I've already got Pinball Dreams and anxiously waiting for Pinball Fantasies to be released.

Most (if not all) of those above have free versions, so it's worth having a bit of an explore on the app store for the freebie ones if you're unsure about spending a few quid
Top

Likewise. I take it you've seen the YouTube video? (Hopefully they'll get any skipping issues sorted—there's the odd jerk in the video, although that could also be down to video compression.)
iPhone/iPod/iPad game/app reviews: http://www.iphonetiny.com
Top

As Sir Clive says, +1 for Virtual Pool, loved VP3 on PC and this is an amazing conversion for 59p, very intuative. Play this almost every day. The new Tiger Woods game is also good. I wanted to like the Pole Position remix game but I crash waaay too often.

So it's better than a Gameboy, or a DS, or a Neo Geo Pocket, or a PSP? From the looks of those games it just seems like most of them are clones of games that already exist on other systems. I'm not saying these iPod games aren't good, but there doesn't seem to be a lot of originality there to me...

To be honest I'm getting fed up of you lot championing it every 5 minutes!
The 100k Challenge - 40 Arcade Classics. 2 MAME Cabs. 1 Average Gamer.
Mastertronic Chronicles - Mastertronic C64 Game Collecting and Reviews
My Youtube Channel (featuring Mastertronic, Funspot, REPLAY and more!)

Better than a DS with an R4 card though? Not so sure about that!

Likewise. I take it you've seen the YouTube video? (Hopefully they'll get any skipping issues sorted—there's the odd jerk in the video, although that could also be down to video compression.)

Yes, I've seen that - what with watching that and playing real PF on my Amiga (and emulated on my MacBook Pro) I am almost at fever pitch. Yes, I'm that sad