Any fans of "The Viz" on here?

I actually like the satirical articles. I remember reading one based on "Take a Break" where a woman would claim to have found her true holiday love, over and over. She was being used each time but there was always some unreal reason as to why it happened. The letters page is also hysterical. I a gree it's not as funny as it once was, but it's done well to stand the test of time.
http://www.meditoria.com/
http://www.twitter.com/PeeJay1980/
Top

That article was only last year! Appearing Viz's "magazine-within-a-comic" titled Take A Shit! - "Something to read on the bog during the break on Jeremy Kyle"

I liked Billy the Fish. Student Grant was my favourite overall. I also quite liked Roger Mellie and Sid the Sexist, plus several of the one-off strips. On their website there was a Flash based voiced animation of Doctor Poo. I don't know if it's still there.
Top

Does anyone remember reverent ramsden's ringpiece cathedral? That was quite funny, about a priest who was convinced the was a cathedral up his arse

Other old favourites of mine..

I haven't read t for effing years, probably 15 years or so I reckon. Incidentally, did anyone ever read Zit? That was quite funny too, one article I can remember laughing out loud to was titled "Road Rage in Toyland". Noddy got battered to a pulp by mr angry beetle

Changed to "The Nice, Honest Gypsies"

Never fails to raise a smile... 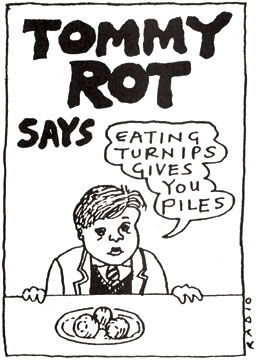 Viz' Facebook page still gives me a chuckle but the magazine less so. Cant decide if its me getting older or the quality of the magazine in decline.

Shinobi wrote: Desperate Dan or whatever he was called in the Viz

Roger Mellie... the man on the telly BOLLOX

Does anyone remember watching the spoof documentary on Channel 4 about Viz magazine? It's the one where they interview a lot of famous celebrities and apparently they're upset about being ridiculed in the magazine. There's supposedly a letter back from the Queen. It basically, goes into the history of how the magazine was founded, etc. There's also the fact that interviewer has a wind problem - and that cracks the staff of Viz up!

I don't think that it has ever been repeated on TV. It doesn't seem to be on YouTube. I scanned a few torrent sites as well.

I think there's a Culture Show special on Viz on YouTube.

I think also, that the editor appeared on HIGNFY a long time ago - in Deayton's days.
Top

^ Not the documentary being referred to but better than nothing, the bits about Viz from that Comics Britannia thing that was on BBC Four a few years back: