Realised today that I went to my first gig twenty years ago. It was 9th July 1996 at Nottingham Rock City and it was Fear Factory supported by Drain and Manhole though Manhole left the tour a day or two before due to a member of the band being arrested.

Have seen quite a few bands since then including the likes of Metallica, Guns n Roses, Aerosmith, RATM, AC/DC, The Offspring, Green Day, Def Leppard, Deftones and so on.
Game Over Yeah - My Blog
Game Over Yeah - Facebook

I have seen the mighty Iron Maiden 4 times:

Metallica at the Sheffield Arena in 2013/14 on the Death Magnetic Tour was very disappointed
Went to Ozzfest 2002 and saw Ozzy, Black Label Society and Slayer.
Thin Lizzy twice, this is when they were fronted by John Sykes in the 2000's
Heaven and Hell at the Sheffield Arena, that was Black Sabbath fronted by Dio, but they chose a different name.
A Swedish band called Wolf twice
Smaller bands Evile and Epica at a venue called The Corporation in Sheffield
Diamond Head, Airbourne, Machine Head and Iced Earth as various support acts.
None descript gigs for myself that I went with friends to at Birmingham Academy included Less Than Jake and Stone Sour....weren't particularly bothered about them, more of a night out.

Then there is the few gigs I have played myself, including supporting Anvil...best gig of my life!!
Top

Stone temple Pilots - gig rescheduled due to death of Kurt Cobain. Coincided with release of Purple and was a good mix of their heavier stuff (!) and acoustic stuff. One of my favourite gigs for atmosphere and quality.

Wildhearts - Wolverhampton 1994-95 ish - great sounding gig but spent quite a lot of time having my freshly dyed flowing locks fondled by a girl I met there. Did get to enjoy about 70% of the set so not all bad

Drain/Manhole/Fear Factory - left about 25% into FFs set as they sucked. Manhole kind of blew goats too but Drain at least put on a good show.

Slipknot - Wolverhampton - the gig that got them banned from Wolves. Kicked ass and the support band seemed ok.

Republica - as a chaperone to a friend. Not a big fan but they sounded as good live as could be expected.

FAT - Woody (of madness) was in this band that appeared at Exposure rock cafe in Merry hill , then Birmingham. Helped them by moving equipment from the van at birmingham as we all got up and started the mosh pit and chatted to them after the Merry hill gig so they asked if we were going to brum and we did. Great guys , shame they didnt go far.

Silverchair - Xposure rock cafe Birmingham. Before they made it big they toured their album Frogstomp around smaller venues. Sat and chatted to lead singer before gig. Surprisingly good and very talented. Show was too short - left with so much free stuff , signed set list etc but left em on a bus.

Dog eat Dog - merry hill - place filled up with so many skaters etc it was a really good show.

Apes Pigs and Spacemen - Merry hill , good show but where did they go?

Perhaps sensing this question would one day be asked, I've been keeping notes of every band I've ever seen, and giving them ratings out of five too (based on enjoyment rather than performance). This is handy.

Started going along to gigs recently, and it can make for a good night. Think the most enjoyable one I've seen was Chvrches at O2 in Brum. Did see Imagine Dragons at Barclaycard Arena and that was a terrific show. Looking forward to seeing Chilli Peppers and Babymetal in December, and just booked tickets for Leann Rimes this morning too.

I've been anally retentive from a very young age

My first ever gig was Deacon Blue 1990, my second was Inxs 1990 and third was Simple Minds 1991.... but I soon sorted myself out! Probably the band I have seen the most is The Mission (20+ times I reckon), and am seeing them again on 8th October. Have seen The Cure, The Wonder Stuff, Morrissey and Lush multiple times, loved the Lush comeback gig a few months back.

Wish I had done a list as can barely remember but Inspiral Carpets, Curve, New Model Army, Suede, Sleeper, Dinosaur Jnr have also been seen a few times.

Biggest regret was paying just to see Morrissey support David Bowie in 1995. Left after 2 Bowie songs as I wasn't really into him at the time

Too many to list but the band I've seen live the most is Iron Maiden (seven times). After that it's Wolfsbane and The Wildhearts (three times for each). Carter The Unstoppable Sex Machine would have been three times too but the bus broke down for one of them and we never got there.

Best gig that I thought would be rubbish but was really good: Del Amitri.

Support Band that I'd never heard of that turned out to be really good: Stereo MCs.

Band I've seen most times by accident: Saxon.
If it's slower than me, dumber than me and it tastes good ... tough titty.
Top

for years I only watched local friends (most of which had friends or friends of friends in them), think i saw one godawful emo band about 3 or 4 times because the singer was a friend of a guy i trained at work.


I was at the pixies gig at the apollo

Also very jealous that you got to see Amsterdam live (please tell me they performed 'and it hurts' one of my favourite songs of 1999, and also a right pita to try and get a copy of)

Not sure I can remember them all, and there had been a rather barren spell for a number of years, but:

The Beach Boys - 50th Anniversary - - soooooooooo overjoyed to witness my musical heroes live, and still walking on Cloud 9 even now some 4yrs on. Phenomenal.

Brian Wilson - Pet Sounds; SMiLE - - disappointed that he cancelled his 2015 tour as a consequence of the film of his life taking over, as I had tickets just three rows from the front. But to witness my musical hero perform these legendary albums was enthralling
Sigue Sigue Sputnik - just simply love this unfairly maligned group. Caught them first at Whitby Goth Fest, then at least once on every tour thereafter
Zappa plays Zappa - ( ' ) [apostrophe tour] - fantastic performance, really want to see them again but they seem to only do London, now
Journey, three times
Foreigner (as support on a Journey tour)
Styx (as support on the same Journey tour)
John Parr (as support for Journey's first tour) - really rather good. Did you know he wrote the 'jingle' for Gillette - 'the best a man can get' - originally as a full-length song?
It Bites - twice, Bradford St Georges and Manchester Apollo. Am enjoying the new music, but it isn't really the same without Frankie.
Frank Dunnery - thrice, including The Duchess in Leeds which is one of my favourite performances - just Frank and his guitar; plenty of fun to be had, and you really could not hear him for us fans singing along to the fantastic Still Too Young to Remember; the look on his face as a consequence - FAB!
Joe Satriani - witnessed on every tour up until his Colossus, after which I didn't fancy attending alone. Sensational guitarist.
Steve Vai (as part of a G3 tour hosted by Joe Satriani)
Ryuichi Sakamoto - wasn't sure what to expect, but after the hugely strange and unnerving opening sequence morphed into a thoroughly satisfying performance
The Sweet
The Damned - both spoiled, once by a near riot (NOTHING to do with the band who actually tried to keep order), and once by the failure of the keyboards just before Eloise (which still got performed, and so proved a unique if awfully flawed rendition)
Marilyn Manson - didn't really know what to expect; brother and his then-girlfriend were fans and I was taxi, but have grown to enjoy a lot of his music as a consequence
The Human League - tore the roof off when Electric Dreams got performed!
Howard Jones - enjoyable, but he chose to perform a subdued remix of New Song which took the shine of the show.
Queen [forget the name of they American who took Freddie's place] - excellent
Elton John - very good performance; the support act (Two Cellos), too which also got to join in on some of Elton's work.
Status Quo - several times, including The Duchess in Leeds for which I have a fully signed ticket (one of only to in existence, the other owned by my younger brother!)
Last edited by Sputryk on Sat Sep 17, 2016 6:05 pm, edited 1 time in total.
Top

Sputryk wrote: Zappa plays Zappa - ( ' ) [apostrophe tour] - fantastic performance, really want to see them again but they seem to only do London, now

On my bucket list... Think I listen to Zappa more than anything else these days, I was 8 in 1993 so no chance of seeing him obviously - but this'll do

Can't remember if Amsterdam played And It Hurts... Just remember they made Space look crap that night. Saw them again a couple of years ago in the Anglican Cathedral supporting Dexys Midnight Runners, that was a great evening

I'd love a big list of every gig & football match I've ever been to.

I think my favourite festival was Leeds 2000, some great live bands here... 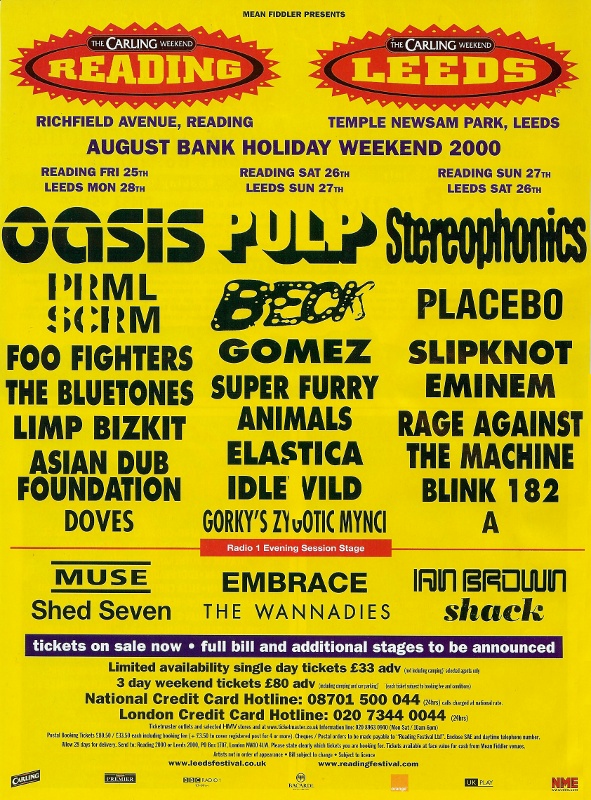 In terms of concerts I'm most glad I went to, James Brown, U2, Rolling Stones, Stone Roses, Beastie Boys & They Might Be Giants.

Gutted I never got to see Prince live, I know he would've been incredible.
You can follow me on Twitter https://twitter.com/DaveySloan
Sponsor Me http://www.justgiving.com/daveysloan2014

Can't remember if Amsterdam played And It Hurts... Just remember they made Space look crap that night. Saw them again a couple of years ago in the Anglican Cathedral supporting Dexys Midnight Runners, that was a great evening

I am trying to track down a copy of that song, my only hope appears to be a low volume compilation. d'oh