psj3809 wrote:Not that I'm a spurs fan but I remember the trolling from some members towards spurs fans. Amazing how quiet they are now ! Usual story. Quiet as a mouse when it's the other way round

Don't really understand your point. Isn't part of the fun of football taking the p*ss out of your rivals? Surely it's ok to laugh at your rivals when they haven't finished above you you since 1995 and haven't won the league in colour?

But as they are clearly going to finish above Arsenal this season, along with the fact that the season has been pretty poor what would you expect the fans to say?

I didn't 'troll' but did have a good laugh as I mean come on, Spurs managed to finish third in a two horse race. You cannot help but laugh at that.

I think that when the title was absolutely definitely out of sight, last season, Spurs just gave up, they just didn't really care about anything else, and that's why they finished third. Nobody expected them to finish that high at the start of the season, and had Leicester not won the league, everyone would be saying how good their season was!

Everyone said they "bottled" it, but did they really? They were the only team to give Leicester a run for their money, none of the other teams showed up. And it's the same this season, they're the only team to sustain a challenge. They won't do it again, and maybe they'll collapse a bit when they realise first is mathematically impossible again, or maybe they'll learn from last season and keep going. Spurs play some of the best football in the league at the moment and have some excellent (and young) players, and one of the best managers in the league. They're in a strong position without spending hundreds of millions of £s hand over fist. Or rather, they sell enough other players to make it a negligible difference at any rate.

Danny Rose - £1m, Kyle Walker - £5m, Toby Alderweireld - £11.5m, who I rate as one of the best CB in the league, even if I am a bit biased. Vertonghen I think was never actually really released the fee, but Ajax wanted around the same fee (£12m) for him, and they make a great pairing.
That back four pairing is ridiculous when you consider the £50m for John Stones for example.

Harry Kane - "Free"
That's just a bonus. Not had a prospect like him come through the youth ranks for awhile, in attack. Perhaps arguably since Nicky Barmby.

Of course, they've spent money on other players, some of who have come good, and some not so good. But the core of the team is pretty solid, for where they came from etc, and they actually play like a team, unlike the days of Gareth Bale who won entire games on his own. If they can hold on to everybody, and with the new stadium to come, and players (seemingly) enjoying being there, they've got a good immediate future...
INSTAGRAM
Old video games recreated (badly) in MS Paint.
Top

This was in The Sun today 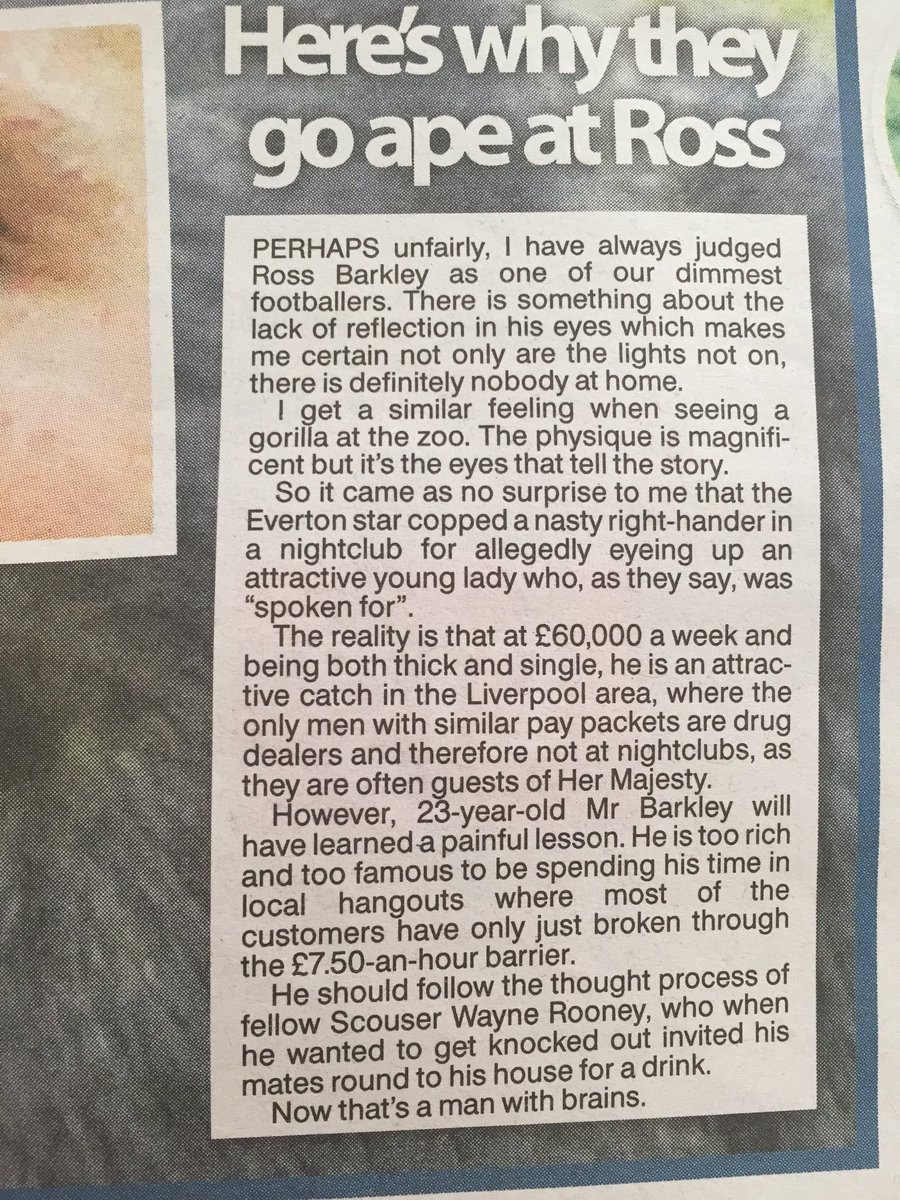 The day before the Hillsborough anniversary no less.

What do you expect from that gutter rag? Especially considering that piece was written by the very man who was editor of said rag when it published those abhorrent slurs 28 years ago.

Not to mention the gorilla comparison, especially considering Barkley is 1/4 Nigerian.

He's now been suspended by The Sun - the very people who approved the article. Never knew he was 1/4 Nigerian, and whilst the comments are abhorrent the fact it's been reported to the police as a racist hate crime is going somewhat OTT

I think the gorilla comment wasn't meant to be racist at all. I don't think anyone here knew Barkley was a quarter Nigerian. But it's the sun and it's Mackenzie so I hope they throw the book at them
Top

Well after Chelsea's defeat yesterday to Man Utd Spurs are now only four points behind. On paper Spurs have the slightly more difficult run-in but Chelsea did recently lose to Crystal Palace.

Absolutely disgraceful refereeing at the Barcelona vs Juventus match tonight. Surely someone from UEFA must have told the ref that Juventus should have had at least one player sent off and Messi should have scored a hat-trick.

It was supposed to be a Barcelona vs Real Madrid final but now those pesky teams Monaco and Juventus have progressed and now the draw on Friday is going to have to be sorted to keep the two Madrid teams apart.
Game Over Yeah - My Blog
Game Over Yeah - Facebook

Former England and Aston Villa defender Ugo Ehiogu has died at the age of 44 after suffering a cardiac arrest at Tottenham's training centre on Thursday.
Had been working as the Spurs Under 23s coach/manager.

Really sad news and so sudden.

I was reading an article on The Guardian and everyone was so positive about him and how much of a nice guy he was. Was really sad reading it.
Game Over Yeah - My Blog
Game Over Yeah - Facebook

Old 'Arry lost his first match in charge of Birmingham City and it was against Aston Villa of all teams.

Utterly ridiculous decisions from the new Birmingham owners. Fire Rowett who had the team in seventh and were only out of the play-offs on goal difference and replace him with Zola who has a terrible managerial record. Then wait for him to quit with three games of the season remaining (after winning 2 out of 24 matches) and then bring hin Harry Redknapp.

When Zola was hired the Birmingham board said that they wanted to go in a new direction. Well they certainly did, quite possibly in the direction of relegation.
Game Over Yeah - My Blog
Game Over Yeah - Facebook

Well Sunderland are pretty much guaranteed to be playing Championship football next season.

dste wrote:Joey Barton has been banned for 18 months due to betting on matches including his own.

The guy is a bit of an A-hole to say the least but I do agree with some parts of his statement:

"I think if the FA is truly serious about tackling the culture of gambling in football, it needs to look at its own dependence on the gambling companies, their role in football and in sports broadcasting, rather than just blaming the players who place a bet"

"But surely they need to accept there is a huge clash between their rules and the culture that surrounds the modern game, where anyone who watches follows football on TV or in the stadia is bombarded by marketing, advertising and sponsorship by betting companies, and where much of the coverage now, on Sky for example, is intertwined with the broadcasters' own gambling interests"

"If the FA is serious about tackling gambling I would urge it to reconsider its own dependence on the gambling industry. I say that knowing that every time I pull on my team's shirt, I am advertising a betting company"
The dry fart for Barry MacDermot and all the cancer patients in the Glamorgan testicle ward
Top

Exciting end to the premiership. Even though i hate Man utd - fair play to them as theyve been on a great streak in the premiership without losing a game. Should be very tight to see who gets champions league qualification. City have messed up recently with some draws.

Can see Liverpool fading away late on as they normally seem to do, hope they manage to get a spot. Exciting day on sunday with the last day of the championship when it comes to the relegation battle. Know a lot of Blackburn fans so they're nervous as anything
Top

psj3809 wrote:Exciting end to the premiership. Even though i hate Man utd - fair play to them as theyve been on a great streak in the premiership without losing a game. Should be very tight to see who gets champions league qualification. City have messed up recently with some draws.

Can see Liverpool fading away late on as they normally seem to do, hope they manage to get a spot. Exciting day on sunday with the last day of the championship when it comes to the relegation battle. Know a lot of Blackburn fans so they're nervous as anything

United have Spurs and Arsenal away. Hopefully they will lose those.
Top
Post Reply
143 posts