so what are your favorites. its so hard AS I have so many. name your fave, your top 3, top 5, or even top 10. anything you like.


10. Thundercracker - I got this as a toy when I went into hospital as a kid so already an emotional attachment, but I also like the character. A Decepticon
who actually has a sense of honor plus he is a seeker.
9. - Hound Just always liked the character.
8. Starscream its Starscream, whats more to be said.
7. Smokescreen A bit out there and not one of the main guys but was a great toy and always been a fan
6. Soundwave Always thought he was cool as hell form the way he talked, to being able to deploy Rumble Frenzy Ravage etc. such an understated
that most of the other decepticons were afraid of him.
5. Sideswipe Was over the moon when he was chosen as one of 5 characters in the new devastation game.
4. Jazz Love this guy, comes across as a chirpy happy character but is a black ops specialist and dangerous as hell
3. Rodimus / hotrod from getting hotrod as a toy, seeing him in the original animated movie, and seeing him in the comics in the target :2006 story arc.
2. Ultra magnus This guy is so much better than he is portrayed. in the comics he was the first to give Galvertron a kicking, bot to mention in the
Target 2006 storyline it took an entire elit unit ( the wreckers ) to replace him.
1. Optimus prime Normally I hate the overly heroic goody two shoes leader typer character. This is my one exception. Especially his fight with
megatron in the animated movie.
Top

I sold all of my G1 collection but I kept all 5 Dinobots, I love them. Hoping to get some more as someone from work just found about 10 boxed ones in his parents loft and I am just waiting for him to give me a price

Hmmm! It's been a while and I sold nearly all of mine but I kept a handful of them. So I guess they are my faves.


Soundwave. Kept him because he was my favourite one. I actually wouldn't mind buying some of the cassettes because my Laserbeak broke thirty years ago.

Cosmos. Was the first proper one I ever got. Even if his head doesn't stay up. He can spot a bicycle from space, don't ya know?

Grimlock. Just a really good design. I swapped Snoopy Tennis (Game and Watch) for him from a mate who died when we were 16 or something so I keep it as a reminder of him.

Beachcomber. The second one I ever got. A better design than most of the other minis.

This lot didn't survive the cull but I owned them and they were all great:

I never owned Hound but I really liked him as a character so he can be my tenth.

10 in no particular order, which is likely to change next week as all my top tens do. I'm basing this on comic interpretations of the characters.

1. Soundwave- forget the TV version, Simon Furman's writing of the character in the Marvel comics, making him a calculating competent villain, who when not having to subordinate himself to Megatron's megalomania or Shockwave's hubris is able to lead the 'Cons to some significant victories, particularly in Dinobot Hunt.

2. Prowl- from the original version to IDW's Machiavellian puppet master, running the Autobot campaign from the shadows, such an interesting character.

3. Galvatron- wonderfully mental. Whether in Marvel building his giant shiny censored o' death in Target 2006 to shoot the future, trying to fight a rip in the space/time continuum in Time Wars, through to the IDW days-

"You. You generated the signal, tiny one? It is ingeniously painful. Make no mistake, if you use it again I will kill you and—where are you from?"
"N-New Mexico."
"If you send that signal again, I will eradicate all who dwell in this New Mexico... and, for good measure, the old one as well."

4. Chromedome- He was the only Head Master toy I ever got, and was pretty much anonymous in the Marvel series, but he's come into his own in IDW, being a mneumosurgeon able to access peoples memories, and being in a relationship with Rewind.

6. Thundercracker- went from being the other seeker in Marvel to a complex and honourable character in IDW, with a sideline in writing terrible screenplays.

8. Scorponok- Marvel character underwent an interesting character arc where he started out as just your generic 'Evil Leader' but became something more complex, ending up in an alliance with Optimus Prime to fight Unicron.

9. Ultra Magnus- written as your classic lawman character who ended up tortured by the memories of those he failed to save in Target 2006, nearly kills Prime in Prey, gets entombed in lava following an epic showdown with Galvatron, through to the rule obsessed character of IDW. Always interesting.

10. Shockwave- Cold, calculating logic obsessed. a more dangerous villain than Megatron in Marvel, and a tragic character in IDW, originally a passionate and vocal supporter of freedom cruelly lobotomized as an example to others by a corrupt government, ended up a threat to the entire universe so great Megatron saw the error of his ways and joined the Autobots to stop him!
Top

I couldn't name more than three. They looked cool, but I was too old for them, I'd grown past playing with cars so never got into the lore to know the names and stuff. That it got silly with stuff like a transforming walkman just lost me further - what kid wants a pretend walkman as a toy? Cars, trucks and jets, fair enough, but the walkman was daft.
The Retro League - Where skill isn't an obstacle
Retrocanteen, home of the unfairly banned

The NES/SNES one, unlike those bloody Sega ones they got the right idea
*The Nights of gaming * My inane prattle * Youtube page*
Top

I've never read the comics, so this is based purely on the cartoon:

There are also a lot of characters I can't stand, like Blurr and the dinobots. But that's a totally different list I suppose.
Top

Generated from a combination of the cartoon, comics and toys.

1. Optimus Prime.
2. Shockwave(loved his gun. Yeah, him seeming to be a more calculating villain that Megatron - at least in the comics).
3. Soundwave(love all those cassettes/transformers he had on him).
4. Brawn(small and powerful - plus, plucky).
5. Megatron(the big baddie - and with an ego to match).
6. Grimrock(Rawr! Grimrock! Rawr!).
7. Jazz(Sort of second in command of the Autobots. A cool character).
8. Powerglide(One of the few aero Autobots - he was an A10 Thunderbolt. Just seemed to be a character).
9. Starscream.(Hey - what more is to be said?).
10. Bumblebee(Got to love a VW - and his character).
Top 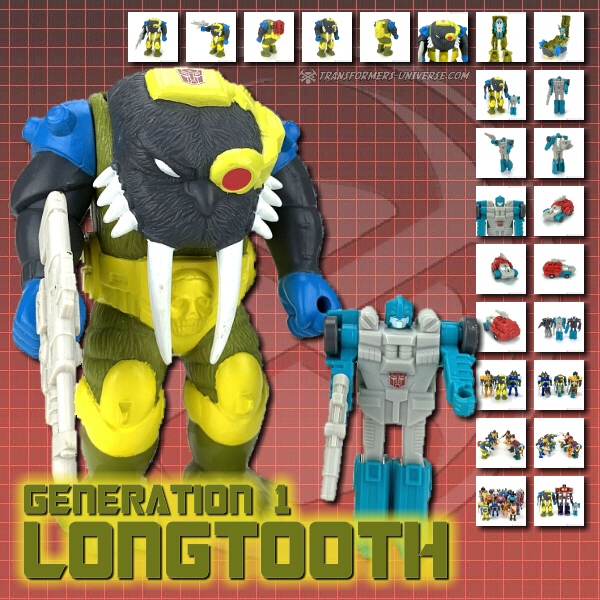 Never went as mad for Transformers as I did most other things, but those two... For a short period in my life they went EVERYWHERE with me, still got them both on my bedroom shelf now. Had the original metal Optimus Prime and Bumblebee toys at one point (from car boot sales, before "collectable" entered that area), but these eventually got sold on at our own boot sales, ah well.
My comics blog (mostly lesser-known UK stuff from the 80s and 90s)

1) Soundwave awesome character love his voice(could listen to it all day) and his look criminally underused in the cartoon great character in the comic
2) Grimlock looks brilliant in his robot form and a anti hero in that he goes against everything Prime stands for and will kill people.. His reasoning by killing them they won't kill anybody else
3) Megatron cruel but actually intelligent and funny one liners
4) Powerglide/Paraglide had a figure of him and the only Transformer to get the girl as in "The girl who loved Powerglide
5) Starscream when my friend first got me into Transformers and put the movie on I was surpriseghts and turn people against one another
6) Thundercracker brilliant character in the IDW comic's can't remember him doing much in the cartoon
7) Arcee like her voice and normally prefer the female characters

Warpath my first ever transformer friend gave me him for free, I always remember seeing lots of him and Seaspray in Poundstrecher in later years
9) Snaptrap loved the figure reminds me a bit of Soundwave friend said he was called the Butcher of the Bog took me ages to find his name
10) Octamious Prime bit of a lefty wet blanket but with morals a very cool characteristics
Last edited by Shinobi on Sat Jan 09, 2016 1:40 pm, edited 1 time in total.
"Crush the Old Order and CREATE A NEW SOCIETY!"
Top

I loved the g1 toys back in the day, but seeing them now they look a bit naff. The masterpiece line of toys however are awesome. They look just like the g1 cartoon characters so I've got a few

being pretty shallow about it I just go with the most aesthetically pleasing characters rather than their personalities. If they had a cool voice in the cartoon it helps too.

jetfire- would love them to make a masterpiece of this one. You can get a transformable macross Valkyrie but its nearly £200
9) starscream - I've got acid storm and sun storm which use the same mold and its a great figure
10) Galvatron.
Top

Another vote for Soundwave !

Pride of my toyshelf, as a boy.