Megamixer wrote:From what somebody on here said last time this topic came up, the theatrical versions on the two-disc special edition DVD's are direct rips of the laserdisc releases with zero effort put into them.

Zero effort is what you want with Lucas though, as he can't resist making edits whenever there's a new release. There are even a few on the Laser Disc release, although nothing like the wholesale changes we got with the Special Editions.
Top

Yeah Disney will probably release them at some point in the versions that everyone wants. They are a business who wants to make money and lots of it. Lucas, well.... It was his movies and he want to do what he wanted with them.

A laserdisc turned up a while ago with never before edits from return of the Jedi. Guy paid a load for it off ebay. Personally I think he got it cheap considering it's rarity.

I've got the original VHS widescreens of ep 4 - 6 and I did get the special editions (again on VHS) when they came out.

Have made a point of not buying ANY versions of these on dvd/blu-ray or whatever, can't put up with the different versions, subtle cuts/changes there is no need!

Probably when Mr Lucas pops his clogs then I might buy it.
Top

I'm quite happy buying most of these. It helps keep Star Wars 'alive' out there and popular, i dont mind the alterations etc that Lucas wanted. Many of them he couldnt do at the time for various reasons, the fans love them as well.

If no one bought all the extra scenes/new dvds/blu-rays i doubt Disney would have bought Star Wars and bother making new films if there were hardly any sales of a new version etc. They know fans love it and lap it up so we'll be getting a lot of new films/standalone ones etc
Top

^ yeah I always thought it strange people would boycott buying them. Not like sales are being hurt and they will give in and suddenly release the originals but with cleaned up picture and sound. Would be nice if it happens but let's be honest if would of happened by now if it was going to happen.

Regarding the changes, well I can take them or leave them. I still enjoy the films regardless if Han shot first or not

yeah it looks stupid Han dodging laser fire but so what, my young son don't give two hoots and loves them and I have far worse things in life to worry about.
Top

I've got mates who have bought every version of these films over the years, just don't fancy owning 4, 5, 6 versions of the same film.
Top

I had a widescreen VHS box set after the first round of updates, then a silver box with the DVDs in and a bonus disk. I gave the three silver ones to my brother, kept the case and the bonus disk, and bought the three gold DVD editions separately at various discounts. These were the 2-disk packs with the new edits and the original cuts.

When the edits were released in the cinema I thought the work on Star Wars, particularly the bits around Mos Espa, were excellent. Empire had a bit of tidying up and a better-looking cloud city, but nothing extra added in, and I didn't bother going to see Jedi. Even on the supposedly fixed versions, the Rancor effects look terrible.

I got a bit fed-up replacing all my videos with DVDs, so I still can't be @rsed with buying Blu-Rays.
Top

Megamixer wrote:From what somebody on here said last time this topic came up, the theatrical versions on the two-disc special edition DVD's are direct rips of the laserdisc releases with zero effort put into them.

Zero effort is what you want with Lucas though, as he can't resist making edits whenever there's a new release. There are even a few on the Laser Disc release, although nothing like the wholesale changes we got with the Special Editions.

Possible enhancements mentioned by Paranoid Marvin at the bottom of the previous page is all I would have suggested. It really isn't too much to ask

I used to have a 'special edition' VHS boxset with Vader's head on the side and 'special edition' in shiny red text. The tapes all had stickers on them stating that this was the last time that the original versions would be available to buy on tape so I'm assuming that these didn't contain any edits? I ended up charity-shopping it as it looked worthless according to ebay.

Currently I have this one on DVD: 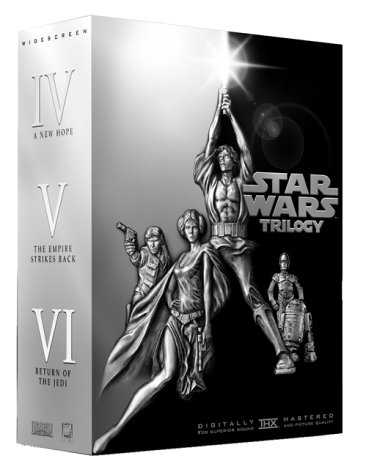 Bought this when it was originally released and I really don't get too hung up on the edits/cleaning up as I have better things to do but...

Arggghhh! This one single edit annoys the hell out of me! This is the only reason that the above DVD set grates with me. A really unnecessary edit that makes no sense anyway (if the other characters look the age they did when they died then the same should apply to Anakin) and is possibly disrespectful to the original actor.

Yep, that is the single most annoying of all the updated versions that Lucas wedged in.

I'm seriously hoping Disney do a definitive edition of each of the original movies which contain cleaned up original cuts.

I really enjoyed the Bluray set's extras too. All those old documentaries and featurettes that I would have seen as a kid, plus all the deleted scenes, some of which I'd only previously seen on that CD rom from the late 90's.
Top

There's no reason with current tech why they can't have every version on a disc and let you branch through whatever version of the scenes you want.

I like the cleaned up Hoth sections where the snowspeeders aren't transparent, but the mirrored cgi stormtroopers on Tatooine bug me. Everyone has their own faves and peeves, so this is the only way to satisfy everyone.
The Retro League - Where skill isn't an obstacle
Retrocanteen, home of the unfairly banned

I'd say stick to the Nostalgia Critic's review of that. You'll get the bulk of it...and Santa Christ as a bonus. XD

I've heard many rumors and reports that Disney are looking into getting the original unaltered versions onto Blu Ray in time for Episode VII, and I think if they want to win over those fans that are still worried about Disney taking over, they will do.

Wowzers! Seeing stuff like this makes me wish I didn't have to spend my money on boring stuff like feeding and clothing my family and keeping a roof over our heads.
You can follow me on Twitter https://twitter.com/DaveySloan
Sponsor Me http://www.justgiving.com/daveysloan2014

Roofs are overrated.
The Retro League - Where skill isn't an obstacle
Retrocanteen, home of the unfairly banned