Today we are excited to launch the UK’s first nationwide Classic Gaming Championship!
Qualifying heats will be held at various events and expos throughout the UK with the grand final taking place at Play Expo on Sunday 12th October 2014.

Heats have been confirmed at some of the UK’s biggest video gaming events such as EGX, EGX Rezzed and Play Expo and we are speaking with a number of other major event organisers to ensure good coverage across mainland UK.

Heats will feature five games from a shortlist of fifteen. All shortlisted games must be a minimum of fifteen years old and are organised into pots covering first to third generation, fourth generation, fifth generation, Sega Megadrive and Super Nintendo.

Entry to the tournament is free, however contestants must have purchased a general show ticket for the event where the heat is being held.

Heat winners will receive a specially produced CGC heat winners medal and an expenses paid trip to Manchester, where they will compete in the grand final against the best gamers in the country for the title of Classic Gaming Champion 2014!

For more information on the Classic Gaming Championships visit the website at http://www.classicgamingchampionships.com/ 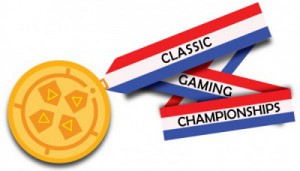 Oh dear, this is not a good game for some that attend my games nights

Can we ban those with world records from taking part in this?
*The Nights of gaming * My inane prattle * Youtube page*
Top

We won't restrict champions from attending, but bear in mind that they have to be good at 5 separate games to win, not just one.

We will be announcing another 4 heats early next week as well as the next 5 shortlisted games.

We have just announced that Funstock.co.uk will be headline sponsors of the nationwide Classic Gaming Championships. Funstock.co.uk will provide prizes of a Dingoo handheld retro gaming console to all heat winners as well as a high value bundle of prizes for the grand final.

The Classic Gaming Championships are the UK’s first ever nationwide video games tournament for classic and retro games.

Heats will be held at various events and expos throughout the UK, with the grand final taking place at Manchester’s Play Expo in October.

Nine heats are now confirmed at:

i'll give this a shot in blackpool, i'm good at sonic, useless at mario kart and never played the others

Good to hear it mate. We won't announce which 5 games it is until the first day of the show, so you might get lucky

Here is a pic of the heat winners medal...

Hi all, here is an update on the Classic Gaming Championships sponsored by funstock.co.uk...

We have now run the first 2 heats, the first one at GEEK 2014 in Margate and the second at the Cardiff Film and Comic Con... Here's what happened...

Margate’s famous Winter Gardens hosted the first ever Classic Gaming Championships at GEEK 2014.With excitement brewing the Replay Crew headed "dahn to Margit" but it wasn't in the rain.. blue skies and suprisingly clement weather made it a full house each day at Geek. After the Replay crew had a mini Staff CGC, to test out the games and the set up of course

it was soon time to open the doors and let the fun commence!

Geek 2014 is a 3 day celebration of games and play was a huge success with 215 contestants registering to play in the CGC. Over 1500 games were played with nearly 700 scores being logged and 59 different people scoring points on the leaderboard, from all age groups, girls and boys, individuals and friends and whole families taking part.

After a fiercely fought battle right to the end of the third day, with some entrants coming back each day trying to better their scores, Harry Thomas was the eventual winner with an impressive display that saw him pip the long-time leader and the overall runner-up.

So after an intense but really fun weekend of retro ganming mayhem it was on to Heat 2...

After all the seaside fun and excitement of Margate, the CGC and of course the Replay Crew rolled into the Welsh Capital, still buzzing after such a successful start to the CGC, also looking forward to Welsh hospitality and of course an intense retro gaming competition! The facrt it was St David's day on the saturday seemed to bring the crowds out and a great jovial atmosphere blanketed the Motorpoint Arena...

Most Comic Cons are fun and engaging places, where you can meet stars of stage and screen and pick up that rare comic or action figure that you've always wanted or been hunting for, so where better to stage Heat 2 of the Classic Gaming Championships, and we were not disappointed! Building on the success of the first Cardiff Film and Comic Con, 2014′s show brought more of you favourite stars from TV, Film and Comics as well as a whole host of fun activities including photo shoots with the stars, panels, autograph sessions and hundreds of stalls full of TV and Film Memorabilia to browse.

147 players registered to compete with almost half notching points on the scoreboard. James Malatynski took the crown, narrowly beating Neil Fowles and James Reid into 2nd and 3rd respectively.

As with Margate a broad mix of contestants played, all ages and gender took part, with some great scores being logged, including one chap dressed as Marty McFly posting a score of over 78 million on Psycho Pinball, which was about 40 million above the next nearest player!

So after another intense, competitive and most of all fun weekend the CGC packed up and headed back over the border, ready to continue the battle and the challenge to find the 2014 Classic Gaming Champion. Harry and James won themselves a place in the Grand Final at Play Expo in Manchester in October bagging a Dingoo in the process amongst other prizes and the CGC Heat champion gold medal, right up there with a Zzap one of course!

The next time we'll see you all is for Heat 3 which will be taking place at EGX Rezzed on the weekend of the 29th and 30th of March at the NEC Birmingham.. Hope to see you there!

Oh - and just to update the thread with info from the most recent heat ...

EGX Rezzed at the National Exhibition Centre in Birmingham hosted the 3rd heat in the funstock.co.uk 2014 Classic Gaming Championships on 28-30 March 2014.

104 players registered to compete with 50 of them managing to notch points on the scoreboard. Barry Susse took the crown, beating Andrew Runagall and Anthony Valance into 2nd and 3rd respectively.

Full scores for each game and the overall rankings are below. For more pictures from EGX Rezzed, check out the Birmingham Heat page.

Next heat in two weeks time at Play Blackpool!
Top

cool thread, seemed like a fun thing!
The world is full of magical things patiently waiting for our wits to grow sharper.
Top

On 3/4 May 2014, Play Blackpool at the Norbreck Castle Exhibition Centre in Blackpool was the venue for the 4th heat in the funstock.co.uk 2014 Classic Gaming Championships.

139 players registered to compete with 63 of them managing to notch points on the leaderboard. Ian Wall took the crown, beating Ross Burnett and Spencer Guest into 2nd and 3rd respectively. Full scores for all the games can be seen HERE.

For pictures from Play Blackpool, check out the Blackpool Heat page.

There are just 2 more heats left before we crown the UK's first ever Classic Gaming Champion. Over 700 retro gamers have taken part in heats as far afield as Margate, Cardiff and Glasgow. The two remaining heats take place at EGX London and Play Expo in Manchester. The final heat takes place on Saturday 11 October before the Grand Final featuring winners of all ten national heats on Sunday 12 October.
More info at www.classicgamingchampionships.com