Might be down to contracts with Sky, since they tend to show tons of Disney movies and even have dedicated movie channels with Disney content. Believe they put up a fuss when WWE first tried to launch their Network in the UK at the same price as America, but it got delayed and had the price pushed up to £9.99.
3DS FC= 0301-9774-9044

Disney have been pulling their content from various providers over the last couple of years in preparation for launching their service, so I doubt it's that.

It may just be a phased rollout to iron out any issues and avoid overload. Can you imagine trying to deal with a global rollout of a subscription streaming service? It'd be horrendous.

Still, it's a big delay for consumers.

Mandalorian episode 1 was very good, episode 2 less so, getting a bit silly and childish at times. It has a very 'wild west' vibe, and that's reflected very much in the music which isn't like the typical Star Wars themes at all.

Not sure why they have them never removing helmets, since it's well documented that isn't (or wasn't) the case during The Clone Wars. A steal from Clint's 'man with no name' I think, and it'll be handy if they ever need to recast the lead role.

Nice to see Dave Filoni in the director's chair, though I suspect that may be where some of the silliness comes from.
The Retro League - Where skill isn't an obstacle
Retrocanteen, home of the unfairly banned

I found it very good, an improvement over Last Jedi. Was it the greatest movie ever? No. Was it the best Star Wars ever? Probably not, but had a really good time with it, treating my nephew to the triple bill IMax 3D showing with midnight showing of the new one as his Xmas gift from me(They were unable to show us Ep 7 in IMax so they put us in a regular screen but we got a free movie ticket to a future film showing as an apology.).

A lot faster paced than the last ones with so much packed into this movie and lots of moments I remember very well. If you have the chance, IMax 3D is the way to go. Our local just installed it and I think I'm gonna try watch all my future movie on it. If Last Jedi rubbed you the wrong way, you should at least give this one a go (It is the last of the Skywalker saga anyway).

It’s very exciting when a new films put. I’m a big fan so did enjoy the film a lot. As you say was it ground breaking. Nah. It was very enjoyable

Think the lesbian kiss was stupid at the end but not a huge issue. Just more PC rubbish

A fair few surprises in the film. As usual the characters and spaceships were great. Off to see it again soon. Was superb in 3d

A fair few surprises in the film. As usual the characters and spaceships were great. Off to see it again soon. Was superb in 3d


I pretty much forgot about that, probably because I was laughing when a certain character gets a certain item they didnt get in A New Hope in the same scene.

Just saw Rise Of The Skywalker.

It's the epitome of a "leave your brain at the door" film. The film is generally fast paced, almost to a fault sometimes. It's glossy and exciting so if you just go with it you can have a good time.

But there's so many unanswered questions. I'm not normally bothered by plot holes, not everything has to be shown, but there were some glaring inconsistancies and plot ommisions that even I couldn't overlook or rationalise.

Some of the diaglogue and acting was dumbed down and seemed out of place, and the political commentary was so on-the-nose to the point of cringe.

I didn't hate it, it was at least better than the last one, but watching it felt like more of an obligation. For me the series ends with Retun Of The Jedi, the last 3 added nothing and just seemed to rehash and unecessarily extend the series for the money and as a vehicle for SJW virtue signalling.
Pratty's trade list, updated (May 2019)!
viewtopic.php?f=19&t=54823
Top

Watched the new one

To many "urgh" moments
Glad I didn't pay to see it
Also the obligatory new robot that looks like they raided someone's junk stash that is sure to be a toy.
*The Nights of gaming * My inane prattle * Youtube page*
Top

It's all right for a glorified toy commercial and special effects vehicle. 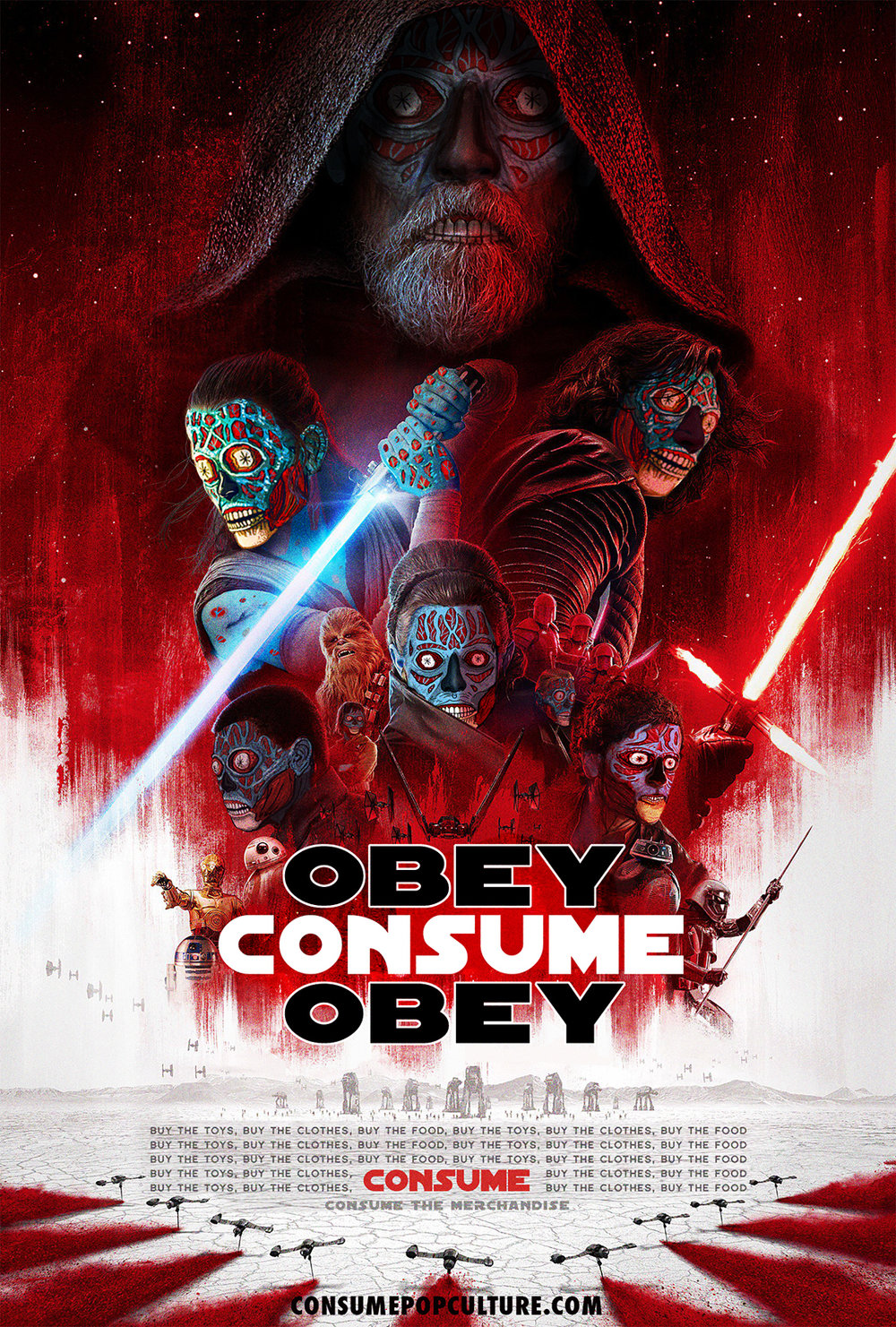 *The Nights of gaming * My inane prattle * Youtube page*
Top

SPOILERS!!
The amount of recons
The trailer bait bit with C3po saying "Taking one last look at my friends"
Then gets his memory wiped. for about ten minutes then R2D2 restores it with a back up
Did they say they could back it up?
Even if the line "Hes my oldest friend" about the guy he just met was funny

Chewbacca dying in a ship explosion, then we see him again ten minutes later as "He was on another ship"

The video game puzzle bit with the snake, all it needed was "Congratulations" jingles

A dagger thas is exactly the shape of the crashed ship
Abandoned ship in the middle of nowhere that hasn't been scrapped by raiders and WORKS!

Death star got blown to bits, why is there big chunks of it?

Rhen he died, oh no he didn't, now he did

All those ships at the end, they could of chucked in the Winnebago from Spaceballs or some other ones from the amount of properties Disney owns

The emperor wanting to become Rey, but then deciding to just drain her life
Also, if he has all those followers why didnt they do something?

Urgh, I know people are saying its a "Turn off your brain" film.
And its a kinda Sci-fi film, but bloody hell, this did my head in more than Ghostbusters 2016
*The Nights of gaming * My inane prattle * Youtube page*
Top

Yep, it's a mess of a film. Prinny's list above only scratches the surface of it's problems. Some of my complaints can't even be discussed here, since Star Wars has been co-opted as a political vehicle to push the enemy of entertainment and reason that is 'wokeness'.
Pratty's trade list, updated (May 2019)!
viewtopic.php?f=19&t=54823
Top

I reallly enjoyed it. Think people over analyse it too much. Was good entertainment. Never gonna please everyone as JJ said

I’m fine with all the merchandise. If it wasn’t for that there might not be new films or TV shows. All good
Top

pratty wrote: ↑
Sun Dec 29, 2019 1:22 am
Yep, it's a mess of a film. Prinny's list above only scratches the surface of it's problems. Some of my complaints can't even be discussed here, since Star Wars has been co-opted as a political vehicle to push the enemy of entertainment and reason that is 'wokeness'.

Im all for diversity in films, I watch Star trek for fecks sake.
*The Nights of gaming * My inane prattle * Youtube page*
Top

psj3809 wrote: ↑
Sun Dec 29, 2019 1:52 am
I reallly enjoyed it. Think people over analyse it too much. Was good entertainment. Never gonna please everyone as JJ said

The thing is I never went into the cinema to over analayse it, it's Star Wars, I wanted to swept away and caught up in what's going on, and I just couldn't because the film is so relentless with it's holes and inconsistancies, that during the film itself I'm asking myself "why?" over and over with no explanation from the film. Even when a character actually says "I'll tell you later", and I'm waiting on the hook right up to the end of the film, he doesn't!

Who isn't? Seriously, when it comes to race and gender Star Wars has been diverse from day one, there's nothing to fix. Diversity isn't the issue. Take Poe for example, he is the politically correct and "toxic masculinity" free re-imagination of Han Solo, and what a shallow and charisma-less character he is as a result. That he doesn't get, or even see the girl, might have actually been and interesting and refreshing twist, were it not for the clear and obvious, eye-roll inducing political agenda driving the film. Star Wars became a marxist/feminist fantasy, it might be interesting to elaborate and discuss further, but as I say one aspect of the political culture influencing the recent films is that you aren't to question it, which is where we find ourselves on this forum. So....
I guess I enjoyed the explosions.

For what it's worth, actual Marxists tend to hate Star Wars with a passion, and don't see it as promoting their politics in the slightest. By way of a hint, try that site DPrinny took the poster from.

That Disney are regularly getting slammed from both sides rather suggests that their true position is somewhat middle of the road, at least if you can apply enough of your fingernail to scratch off the veneer.
Top
Post Reply
326 posts