Hmmm, this is one of the most difficult questions Ive ever had to answer!

Seriously though, Leonardo is a definite no, but the other 3 were tough to call, but I had to pluck for,

Raphael! He's cool but rude! And was also the best character in the live action movies!

Michelangelo - because of the Nunchuks.

psj3909 wrote:What next, Scary Movie better than Schindlers List ? What is everyone smoking.

David wrote:Was there an episode of the cartoon where they met some sort of talking mutant frogs in Florida?

Or did I eat too many e-colours as a kid?

Attack of the Punk Frogs, featuring Genghis Frog and Napolean Bonafrog!
Nice little episode that, features Shredder's magic ball which turns him and Rocksteady and Bebop into helmeted soldiers. Interesting?

Mayhem, I LOVE your Utroms poster, where'd you get that from?
My comics blog (mostly lesser-known UK stuff from the 80s and 90s)

You mean this one? Off eBay actually. It says (c) 1988 on it but I'm not sure if it's actually that old or merely a modern reproduction. But it's quite stunning art, taken from the reprint of issue #4. Most people would recognise it (the right hand side at least) as the art used on the first NES TMNT game.
Lie with passion and be forever damned...

Yep, I recognised it, hence the clicking-and-asking stuff, ho ho! Good old eBay, I got a rather nifty TMNT poster off of there a few years ago.

They've still got them too!
Here it is (from the eBay picture): 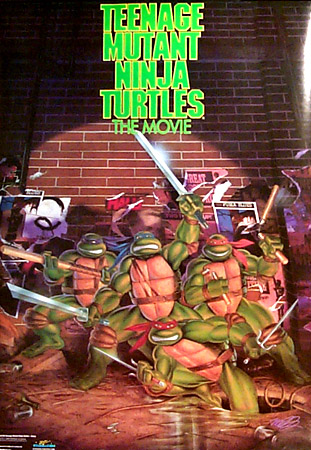 Mikey! Both weapons and personality
"Michaelangelo is a party dude!" Win.