Don't want this to go all WOS, its just something from 2 people I think are very funny.

CLIVE: You know like it says in the Bible .....
DEREK:Yeah.
CLIVE: ..... that, er, that Jesus, on the whole, .....
DEREK:On the-?
CLIVE: ..... was, you know, fairly nice.
DEREK:Yeah.
CLIVE: Do you think that's true?
DEREK:No, I think he was probably a c*nt.
CLIVE:Yeah, I thought that, 'cause, you know, I've-, I've read the Bible, and he comes across so well, you know.
DEREK:Yeah, well, he comes across a bit too goody-goody, doesn't he? I mean, he must have had his faults.
CLIVE: I reckon-, I reckon .....
DEREK:He probably got the horn a lot.
CLIVE: Well, if he didn't get the horn, then he wasn't human, was he?
DEREK:No, right.
CLIVE: And they say he was half human and half God .....
DEREK:Yeah.
CLIVE: ..... but which half was human? I bet it was the bottom half.
DEREK:Mmm.
CLIVE: The God bit was on the top and, er, the human bit had the horn.
DEREK:Right.
CLIVE: I bet the God bit stopped at his navel .....
DEREK:Mmm, mmm.
CLIVE: ..... and he had the human horn bit underneath.
DEREK:Yeah.
CLIVE: So he could be wandering around feeling all nice and saying, "I'm God", up here, you see, but down below-, I suppose his hand would be below, wouldn't it?
DEREK:Depends. He cou-
CLIVE: His arm would start off as God and then become man as it reached about the wrist.
DEREK:Probably, yeah, the wrist.
CLIVE: So he could be w*nking himself silly, all the time his brain was saying he's being, er, good and holy, you know. What a load of f*cking cobblers that is, isn't it? But there was one bit of the Bible I, erm, think was cut out.
DEREK: Yeah.
CLIVE: Er, it was just after the Devil had been tempting him .....
DEREK:Oh-h, yeah.
CLIVE: ..... and, er, the bit that was cut out said, er, "And Jesus suddenly-", no, it said, "And lo! .....
DEREK:"The Devil had the horn."
CLIVE: No, no it said, "And lo! Jesus suddenly got the horn and wandered out of the Garden of Gethsemane and f*cked himself stupid for twenty-eight years." And that bit got left out 'cause, erm, I think it was Matthew thought it would be a bad idea, bad for the image.
DEREK: Yeah.
CLIVE: When of course, in my book, it makes him more understandable.
DEREK:Oh yeah, makes him more human. Oh, well that's wrong, isn't it? Yeah.
CLIVE: No, makes the bottom half human, that's normal.
DEREK:Yeah, yeah.
CLIVE: And the top half God.
DEREK:Yeah, yeah.
CLIVE: They say his right hand didn't know what his left hand was doing.
DEREK:Yeah.
CLIVE: Well, I know what his left hand was doing, the same as his right hand.
DEREK:Yeah.
CLIVE: F*cking encouraging the horn.
DEREK: Scratching, mate.
CLIVE: But they don't-, they cut bits out of the Bible, like it never says Jesus got athlete's foot ........ from wandering around in the desert.
Does it mention it? Does it say, "And lo! Jesus was stricken with athlete's foot"? Is that in? No, it's f*cking out,...... 'cause it doesn't fit in, does it
DEREK: ..... did it ever say .....
CLIVE: ..... With a picture of this holy c*nt wandering round telling people to be good.
DEREK: Did it ever say, "And lo! Jesus had a wee-wee"? No.
CLIVE: No.
DEREK:Nowhere.
CLIVE: Are we to assume that Jesus, throughout his brief life, never had a p*ss? And if-, if he did have a p*ss, why wasn't it f*cking reported? Did he have a crap, why wasn't it down? Why didn't Paul say, "And Jesus went into the temple, had a p*ss, had a crap, wiped his arse with the money-changers," and, er, put in all the stuff which would make him human instead of all this sh*t about saying, "Take up thy bed and walk," to some c*nt who's probably perfectly happy begging?
DEREK: Right.
CLIVE: Makes you f*cking sick.
DEREK: Well, he's probably be-, he's probably been, er, misreported. When he said, "Take up thy bed and walk," he said, "Where's the f*cking bog? .....
CLIVE: Yeah.
DEREK:..... I'm dying for a slash!"
CLIVE: That's what he probably said.
DEREK:Probably what he said, not ..... "take up thy bed and censored walk."
CLIVE: ..... he'd have said it in Hebrew, which is difficult .....
DEREK: Who-, who-, I mean, who would have said that? "Take up thy bed and walk", it's a-, it's a giveaway.
The dry fart for Barry MacDermot and all the cancer patients in the Glamorgan testicle ward
Top

He looked so fakin vulnerable, didn't he?

http://www.youtube.com/watch?v=RPcDREaxsu8
Death may be your Santa Claus.
Top

Bub&Bob wrote:Anyone find this funny?
I sitting here at work, listening to it on my headphones and keep getting funny looks from people everytime I crack up - I think its classic!


Derek & Clive are superb, way ahead of their time.....enjoyed all of their albums.

I kept getting funny looks when sitting in traffic listening to this in the car....you can't help but laugh out loud to it!

The first time I heard "Horse Racing" springs to mind

Derek and Clive - Legends.
For anyone not in the know - check out the following (unless easily offended or suffering from a heart condition).

Sir.
Squatter and the ant.
Having a wank.
Sex manual.
Endangered species.
Valerie's Hymen.
My mum song.
Members only.
Back of the cab.
Parking offence.
Horse Racing.
Records.
The Horn.
Winky ,Wanky ,Woo.

I love Peter Cook and Dudley Moore anyway, whether it be Beyond The Fringe, Not Only But Also, Goodbye Again or their various solo projects over the years.

I first heard Derek & Clive when I was in my early teens which, let's face it, is the most wonderful and eye opening time to hear them!

From the first time I hear 'The Worst Job I Ever Had', I was hooked for life.

I had never heard anything like it in my life, and still haven't.

It's so outrageously and offensively funny that I still end up in absolute hysterics every time I listen to the Albums.

It would have been a shame if Dudley had got his way and they had never been released.

The Worst Job I Ever Had
This Bloke Came Up To Me
In The Lav
Coughin' Contest
Non-Stop Dancer
Joan Crawford
Parking Offence
How's Your Mother?
Horse Racing
Records
I Can't Sh*it
The Horn

Those are my faves from the 3 albums.

Might listen to some later actually, what a C

Reading a Peter Cook biography at the mo - have you seen Not Only But Always? I will get it once ive read the book.
The dry fart for Barry MacDermot and all the cancer patients in the Glamorgan testicle ward
Top

Reading a Peter Cook biography at the mo - have you seen Not Only But Always? I will get it once ive read the book.

Yeah I've seen it, I taped it when it was first on the Telly a few years back.

I also saw a stage play entitled Pete & Dud Come Again, which is more from Dudley's point of view.

In fact, (Should have put this in my first post really!) I have a slight connection with Peter Cook.

My Godmother was the Asst. Manager at a Photography shop in Hampstead opposite where Peter Cook lived.

He used to go in there all the time (Sometimes not 100% sober) and got to know my Godparents rather well. They still know his widow, Lin.

I met him a couple of times myself. At that point I only really knew his work in Blackadder, Mr. Jolly Lives Next Door, One Foot In The Grave and the odd Not Only But Also sketch.

It was a couple of years after that he died.

I was nearly 14 at the time, and it was soon after that I first heard Derek & Clive and then became a huge fan.

Now having seen/heard/read nearly everything he did, I can say that He (Along with Eric Idle and Ronnie Barker) was the absolute best!
Last edited by SpecChum81 on Mon Feb 08, 2010 7:08 am, edited 1 time in total.
Press Play On Tape
Top

ow did you know that your wife was having an affair?
well the fact that she came home and her hair was matted with spank is neither here nor there...

A bit off track - but one of the funiest things I ever saw from Peter Cook was his performance on the Clive Anderson show.

And - one of the funniest things I heard from him was an audio recording made not long before he died - when he took on his Sir Arthur Streeb-Greebling persona and was interviewed by none other than Chris Morris from Brass Eye fame. I've not heard it in a while but it had some of his most surreal stuff - teaching Ravens to fly underwater, eel wrestling and trying to clone the infant Christ (a small Jesus in every home!).
Top

PanzerGeneral wrote:A bit off track - but one of the funiest things I ever saw from Peter Cook was his performance on the Clive Anderson show.

And - one of the funniest things I heard from him was an audio recording made not long before he died - when he took on his Sir Arthur Streeb-Greebling persona and was interviewed by none other than Chris Morris from Brass Eye fame. I've not heard it in a while but it had some of his most surreal stuff - teaching Ravens to fly underwater, eel wrestling and trying to clone the infant Christ (a small Jesus in every home!).

The Audio series is called Why Bother, its out on CD too!

apparently they whittled that down from hours and hours and hours of recording them chatting away and improvising. Genius stuff. The 12 days of Christmas is a similar thing, he again is Sir Arthur Streeb-Greebling and is interviewed over the 12 nights by Ludvig Kennedy (i think that was his name). Great stuff.
WANTED: Mario Party 3 on N64 (just the Box only) ANY SNES GAMES, OR EMPTY SNES BOXES, INSTRUCTION MANUALS or WHITE INNER TRAYS.
Top

Well, today I shifted 153 of my VHS videos to a charity via Gumtree.com. As I was digging through my collection, I rediscovered my original blue-cover Peter Cook Productions VHS vid of Derek and Clive Get The Horn (which was a bit of a shocker, seeing as I thought I'd sold it on eBay many years back!) God, was I chuffed!

As for the film itself, it is actually quite disturbing, edgy viewing at times, it's pretty obvious that Cook could be a pretty nasty, bullying drunk, and his constant, bitterly drunken belittling of Dud is rather uncomfortable to watch (although it's always a joy when Dud cracks up through certain top quality, inspired obscenities from Pete).

I actually prefer listening to their stuff in audio-only format, the whole filmed aspect makes it hard to sustain the illusion of the 'characters'.

But, yeah, so damn chuffed to find it (again!)

PS: The 'Not Only But Always' biopic is absolutely brilliantly acted and very touching/sad, I'd also highly recommend it (I occasionally see the DVD in Poundland, which is where I got mine).
Top

Just spotted a "best of" double CD which has loads of unreleased tracks - whooohooooo!
(or should I say c*nt?) 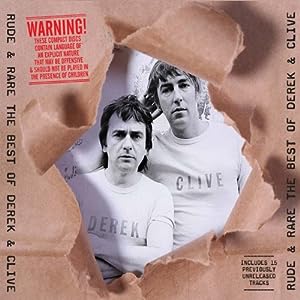 http://www.amazon.co.uk/gp/product/B005 ... d_i=468294
The dry fart for Barry MacDermot and all the cancer patients in the Glamorgan testicle ward
Top
Post Reply
29 posts