Yup! My uncle used to have one and used to spin it out all the time; something to do with all the weight being at the front?

Yup! My uncle used to have one and used to spin it out all the time; something to do with all the weight being at the front?

... or as Rodney called it 'The Prat Mobile'
Top

andy vaisey wrote:Yup! My uncle used to have one and used to spin it out all the time; something to do with all the weight being at the front?

Something to do with it being a Ford rear wheel drive. I had a Ford Escort mk1 and mk2 in the late nineties, and by god that back end!! I thought I'd bought a flying saucer!

I genuinely loved the Capri when I was about 8 at the time (when the mk3 was newish). I had the toy cars, was totally obsessed with it. My cousin had a red one, and it is very vivid in my mind when my dad borrowed it for the weekend to take us to blackpool. Loved it to death.

Was then nearly run over by a 'retro' boy racer, who got out of the car and then gave me a seriously aggressive aural assault with plenty of swear words in. Went off them after that!

They are fetching good money now. Decent ones get 3k+. The Escorts fetch near 10k for a really nice one. They are really spiralling upwards.

Capri Tickford (as in Aston Martin of Tickford) 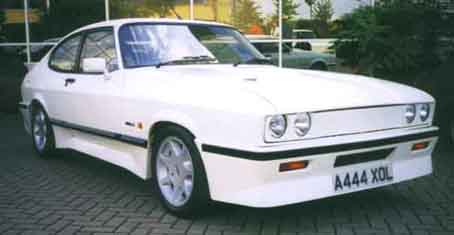 and for pure aggression, the V6 beast!
Top

i love the capri. my old man used to have a red one. shame it's tagged with chavs. i'd have one any day of the week.

my dad reckoned that ford sent out a warning to owners telling them to place heavy objects, like bricks, in the boot when driving in winter cos of the drifting thing. still haven't worked out wether he's been pulling my leg

Putting bricks in the back would've helped with traction (ie making the wheels stick to the road when pulling away, for instance), but it would've made things worse going round corners. Imagine the pendulum effect.

i don't drive. i dunno about this 'penumdulam effect'...

indeed, when i said 'drifting' i may have said/meant something that was completely wrong...

more weight in the back would help going round corners, the reason a lot of rwd cars lose the backend is simply because there's no weight at the back end, especially with the higher powered models such as the 2.8i. the proper term is called oversteer, when you lose the front end it's understeer.

a mate of mine had a race prepared 280 brooklands with a limited slip diff, now that was fun

, you haven't driven unless you've had a brown trouser moment in a capri

btw, he kept 4 or 5 concrete slabs in the boot, without them it was uncontrollable even in dry conditions
Top

Sounds like what you had to do with the morris Minor and the BMW CSL. I remember my old CSL was as titchy as anything. In wet weather and coming to a mini roundabout you had to be so careful. I put a couple of sacks of potatoes in the boot to help out, and forgot they were in there, made a right stink.

Bag of cement in the back of the 28i really helped it....
Top

OK it's not a Capri, but look at this!

DeLorean could be coming back!

I used to have a black 1.6 Capri back in the late eighties & it was a fuel guzzling heavy piece of crap. Mind you it got me to the girlfriend's (now the missus) & was better than catching the bus. A friend of mine had the 3.0 litre Capri, silver & faster than a greased whippet.

"Crush your enemies, see them driven before you and hear the lamentation of their women."
Top

The old drop snoot aint too bad, I prefer the Mexico myself. Im hoping to get a 1.3 MK2 escort, and maybe a Capri when Im a little older
Top

The Master wrote:Nah, they're for people with small willies.

Nah, people who say sports / fast cars are for people with small willies are people who can't afford a decent car