Hi all, does anyone remember this cool little model kits. Having a moment of nostalgia I had a nose round and it seems they're still popular in Japan, I also remember a number of tie-in comics. 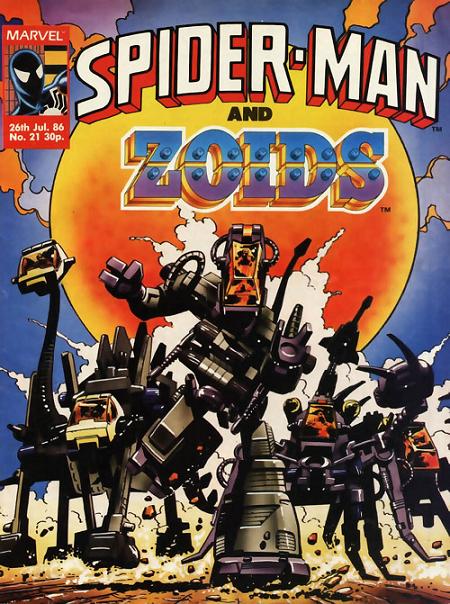 I had just the one as a kid, a tall thin grey one, loved building it and always wanted to collect more, but with already collecting Transformers, Visionaries, Ring Raiders and Real Ghostbusters "Santa" wasn't having it!

I do have a few issues of the Spiderman and Zoids comic, the issues which had instalments of the Marvel Secret Wars in them and the British Zoids strips are actually much more entertaining than the usual US Spiderman!

I remember Zoids primarily for the disappointing game on C64. Good music, not so much gamewise. I can see what they were trying to do, but it was beyond the scope of the system. Following dots around just wasn't fun. A modern interpretation with proper big Zoids stomping around would add a lot to the basic premise. The old one just lacked atmosphere.

I didn't personally have any Zoids, being perhaps a little too old, but my younger cousin had a few alongside his Transformers.
The Retro League - Where skill isn't an obstacle
Retrocanteen, home of the unfairly banned

Loved the idea of them, and would happily have a ton of them now if they weren't so expensive! Did have one, back in the day, but it seems to be one of the few toys I haven't been able to hold on to through my whole life. It's on the front of that comic there, second from left - it was green! That worm-shaped one was the one that always appealed most from the adverts.
My comics blog (mostly lesser-known UK stuff from the 80s and 90s)

I remember I had a Tyrannosaurs Rex type, took me about 6 weeks to build it, and then the head fell off.
http://www.meditoria.com/
http://www.twitter.com/PeeJay1980/
Top

I have this one for sale if anyone fancies it.

Thanks for that picture !

Damn that bought back some memories. Thats one of the Zoids i had as a kid, used to play with it loads in the bath (the zoid)
Top

I was just think about Zoids this morning for some reason, completely unrelated to this, used to read the comic back in the day. I had Ultrasaurus, he was hardcore. Don't know what happened to the toy, I remember they were a pain to keep in one piece, I kept losing the rubber stoppers off it, It's possible it just disintegrated.
Top

Antiriad2097 wrote:I remember Zoids primarily for the disappointing game on C64. Good music, not so much gamewise. I can see what they were trying to do, but it was beyond the scope of the system. Following dots around just wasn't fun. A modern interpretation with proper big Zoids stomping around would add a lot to the basic premise. The old one just lacked atmosphere.

i used to load it up just to listen to the music. and to try to figure out wtf i was supposed to do. didn't have any instructions with it, so didn't get very far

we had quite a few Zoids back in the day. I did used to have Zoidzilla, but it was my older brother who was more into them. I think the last i saw of them was when he got "creative" with a scalpel, some airfix model style glue, all our old star wars figures (sob), and his own collection of dr who figures (from the first time round).

I had a load of Zoids as a kid. They usually looked really cool when built but they would usually shuffle awkwardly along when wound up. Except for the spidezoid which I remember being quite nifty. There were also a few small ones that took batteries called power zoids. I remember this one bombing around the place when a kid brought it onto school once.

I had a few of the big ones too. Zoidzilla which broke whole I was building it, so it kinda shuffled along awkwardly. And Gore the lord protector which was the giant gorilla one which moved along quite well. They were both put into storage when we moved house back in 1987 and the batteries leaked and ruined them both.

Thanks for posting these! I've never seen these ones as toys before, only in comic strip form.

I only ever had the one - I'm guessing it was the Spiderzoid, but I do remember an American friend (the town I lived in had a US naval base and I was friends with some of the kids in their housing estate just along the road) had Zoidzilla, a battery-powered rhino (I think in the comics it was Zoidzilla's enemy) and a wind-up dimetrodon one.

I did also have book at one point - it was one of those "choose your own adventure" things.
Where logic won't work, I will
Top

Just thought I'd do a small update - This topic reminded me how much I enjoyed the book that I managed to track it down again - and I promptly read the whole thing when it arrived this morning. 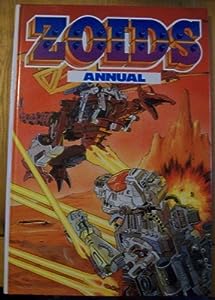 The only thing I've skipped out for now was the small "choose your own adventure" section in it - mostly because I don't have a dice for it.
Where logic won't work, I will
Top

How does it measure up to your memories?

Every bit as good - I've gone through it a couple more times - and each time it triggers another memory. Most recent memory it's triggered would've been me spending hours trying to copy just one of the frames from the comics inside back when I was about 10. I've not gone through the adventure thing yet, but I am remembering bits & pieces of it already - and that's just from other bits of it.

One thing I did notice was that it was written by Marvel. Given that they've been doing virtually every comic they can think of as movies, I'm guessing it's only a matter of time before they do a live-action movie of Zoids.
Where logic won't work, I will
Top
Post Reply
22 posts