This is an emergency stay on this channel

My brother bought me the complete boxset for Christmas (unasked) which amounts to about 10 DVDs. I've only managed to get through 2 so far.
Beeb Vids
Top

How does it hold up?
Top

Only thing I know about this TV show (which isn't much), was I really liked the Zeroids.

I also remember at the end of the show there was a really cool "Noughts and crosses" style short animation sequence.
Top

Yes, brilliant stuff. Got a couple of dvds... Windsor Davies doing one of the voices was superb (effectively reprising his role in "Ain't 'arf hot mum"!)

Was Zelda's voice done by the woman who played the gran in "Royle Family"?

I also rememebr being sh1t-scared of one of Zelda's monsters (the thing with the really wide, sinister grin) and also trying to impersonate the voice of Zelda's son by gargling!
GAME OVER YEEEAAAHHH!

Sabreman wrote:How does it hold up?

It's actually still good to watch, there's a few sly jokes that you wouldn't have got as a kid and whatnot. I'm just watching too many other things to give it any time

I loved the fact that it was slightly deeper than most kids series at the time. There's the science (the cloning of Dr Ninesteen, the robots, life on Mars) and the morality (the "expendability" of the robots, the sad plight of MOID {Master Of Infinite Disguise}) and so on.

I also used to love the noughts & crosses game, sort of like an updated version of the Worzel Gummidge bit (which way was Worzel going to fall?)
merman1974 on Steam, Xbox Live, Twitter and YouTube
Top

I think Moid looks a bit like Ray Wilkins: 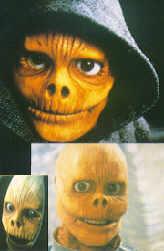 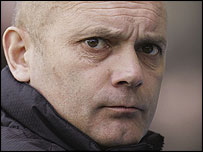 I remember being amazed by the two revolving rings in Zelda's gaff. Dunno why

They were almost certainly seperated at birth

Though I Fly Through the Valley of Death ... I Shall Fear No Evil. For I am at 80,000 Feet and Climbing
Top

I remember Terrahawks when I was little. Loved those funny bouncing-metal-ball robots. Fantastic.

Gawd, that was the worst drivel I ever had the misfortune to watch. I was a huge Gerry Anderson fan before that show, but as I was in my late teens when it aired I was massively disappointed in it.


forestville wrote:This is an emergency stay on this channel

At first i didnt mind it but went off it soon afterwards. Much prefer the other Gerry Anderson stuff, Terrahawks was alright but i would never think of buying some boxed set of episodes or that. Does take me back though
Top

Except for Terrahawks, I enjoyed that one as a kid.

lowering the tone slightly, while at university we used to play a game called terrahawks while drinking.

The idea was to get your spit/phlegm as consistent as possbile, then let it drip down your chin as far as possible, thus creating a 'loogie', while saying terrahawks over and over again. This was in tribute to Zelda and the run of mucus that often hung out of her mouth.

The loser was the first person to have their 'loogie' break, and if it landed on their shoe they were a double loser.

Of course, looking back at it now, anyone who played the game was a loser!