snowkatt wrote:back then they build things to last you coudl expect 10 20 years out of them
these days your lucky to get 5 out of something
things are made these days to break

Yep these days things are purposely built to not last, for example think about why it is you can't change the battery on an apple device without sending it to apple?

Mine got water damaged, and since it's designed not to be taken apart it's completely uneconomical to repair

My Dad recently got hold of separate Sony amp and tuner units from the 80's, fully boxed and in mint condition. He has them stacked on and connected up to his old Techniks CD player and the whole set-up just sounds awesome. He's on a bit of a retro tech obsession at the moment and it's great looking at the new arrivals and seeing how well stuff used to be built.

djcarlos wrote:My current stereo set-up at home - either me or me dad bought them all new.....

HAH I also have the SL-PG440A Cd player in my current setup! Mine's all Tehnics from that era, think 1992ish, comprising tape deck, theatre amp, graphic equaliser and cd, picked up an even older record deck for it off the carboot too last year, will post pics later! Also got my Panasonic walkman from the same era, couple of Casio watches too...and my car is a 97 Toyota MR2 which still runs sweeeeeet!

I won't argue about stuff not being made to last, it seems to be a big issue these days with our technology. Perhaps they do make them to be designed to break, I'm not sure. It certainly feels like it.

There is also another element to think about, and that is the stuff - or the raw materials that modern tech is made of these days isn't as good. Back in the day, many computer components, TV's, stereos and electronic devices were made with materials that while harmless to us, were found to be damaging the environment.

So, over the past 20 odd years, electronic equipment has been manufactured with more environmentally friendly materials. Some of these materials are simply not as strong or durable as the old materials, which basically means they fail more quickly than before.
Top

Well, older plastics tend to feel sturdier in many cases and hi-fi equipment usually have more metal parts or metal exterior pieces to them.

Also can't beat spring-loaded switches on old stuff whereas today it's all tactile switches with cheap PCB boards behind them.

It's just a horrendous waste making things that are going to be skipped in a short space of time, all the raw materials that went into making them being wasted too.

Megamixer wrote:Well, older plastics tend to feel sturdier in many cases and hi-fi equipment usually have more metal parts or metal exterior pieces to them.

Also can't beat spring-loaded switches on old stuff whereas today it's all tactile switches with cheap PCB boards behind them.

It's just a horrendous waste making things that are going to be skipped in a short space of time, all the raw materials that went into making them being wasted too.

People could actually do a lot of good recycling their old phones and tech, believe it or not those things contain a lot of precious metals.


The good news is that even if your phone or computer is outdated, the minerals used to make them are still periodic-table fresh. The gold, copper, silver, palladium, and other precious metals contained in aging electronics can all be melted down and reused as raw materials for the electronics of the future. Circuit boards, for example, contain anywhere from 30 to 40 times more copper than what you'd get out of the equivalent weight of mined ore. Gold is even better, since circuit boards hold up to 800 times an equal amount of gold ore dug up from underground mines. Technology manufacturing has already done the work by putting these resources in one place; the only thing left to do is recycle them once we've finished.


"But wait!" our theoretical cynic out there asks. "It's not like recycling would eliminate the need for mines. Surely we're not getting rid of electronics quickly enough to meet the demand." Well, the demand is pretty high, but you're underestimating just how disposable our technology is. Anywhere from 100 to 130 million cellphones are tossed into the trash each year in America alone. Considering that 1 million phones produce about 35 kilograms of gold, phone recycling has a higher output than many gold-producing nations. The problem? Only 1 percent of those phones are recycled.

The oldest gadget I still have is my LCD Double Dragon game and that works a treat. It's had (IIRC) 2 occasions of batteries leaking inside since I got it as a nipper but still going strong.
Top

I got this howling werewolf for Xmas in 1992: 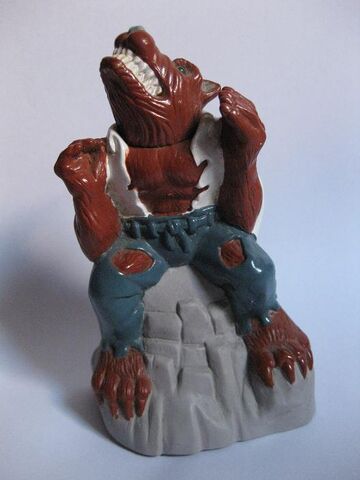 It howls and the eyes light up, and it's been witihn reach for most of the time I've had it (save for three or four years sitting in a box). It's never had a battery change, and it still works like new

Also, our Mega Drive, which had a pint of orange juice spilt into the cartridge slot on Xmas Day 1993 - still works fine as well.
My comics blog (mostly lesser-known UK stuff from the 80s and 90s)

Bought my first music cassette tape in years the other day...side 2 doesn't work properly because the tape is too tight

. The joys of retro stuff eh? I'll get it working of course though it's been a long while since I've had to try and get tapes working.

Have faith in the trusty biro and your music should be restored.
Watching you sleep since 1990
Top

Bwahhh, just had to replace my freezer and tumble dryer which both packed up.

New tumble dryer came with a three year warranty and the hard sell from the manufacturer to extend it to five years as "the parts and labour are very expensive so an extended warranty will give you peace of mind".

Our famiy's Electrolux 350E vacuum cleaner - we've had it for pretty much my whole life (since the early 80s) and it still gets used every week without any problems.
Top
Post Reply
44 posts