For this thread I'm wondering what stuff you've got that's pretty old, but still works? It could be games, Consoles, CD's, Music CD's. Stereo's, TV's, VHS players, you get the picture..

Of course, I know many of you collect old stuff, but I thought the thread would be more interesting if the 'old stuff' you have was bought originally new and still actually works. Or you can tell us about some of your old stuff that no longer works, but you wish it did...

Now I'll admit, I don't have many old things that still work. I do have the following though working:

Quite a few old CD's from the 90's. I couldn't find anything from the 80's though. Looks like my oldest CD dates from 1993.
Also found some old music cassettes, their all from the early 90's though.
What have you got?
Top

I think the oldest electronic thing I own that I've had from new is my Galaxy Twinvader: http://www.handheldmuseum.com/CGL/GalaxyTwinvader.htm
The Retro League - Where skill isn't an obstacle
Retrocanteen, home of the unfairly banned

I still have my old Space Invader watch my mum bought me for my Eleventh birthday, I put a battery in it the other week and it worked, I was well chuffed, it sits proudly on my retro toy shelf

A few that I've owned from new and still work:

I got two of those 'disco scratcher' things from Poundland in 2001, used them a few times before getting bored, and stuck them in the bottom of a drawer of junk. Had to go in that drawer of junk the other week, rummaged around, and BOTH of the 'things' went off, quite amazing the batteries still worked!
Top

ive got some really early first generation Amstrad hi fi equipment (Amps/cassette decks/tuners)i still use from the 70s ,
Dunno what it is about Amstrad stuff ,but ive collect it as a separate hobby,got loads of it plus Binatone stuff too from the 70s
ATARI....There can be only one !!!!!!!
Top

Sputryk wrote:Still got my one and only CD system which still gets regular usage (listening to it even as I type). It's a Pioneer - model PD-Z81M - their first release of a 6-disc system back in 1986. Bought it to accompany the Pioneer midi system I bought the same year and which is also still in use. Great system!

This is still in use. One speaker now needs a bit of volume to start making noises (and on low volume occasionally turns silent), and it's net covering inside is a little torn, but as it is entering it's 27th year I'll forgive it it's foibles.

Haven't got much else from my younger years. Threw out Big Trak as the box got savaged thereby losing all it's value. Also threw out my Harmonograph and kind of regret that now. Not sure if I still have my Scramble table top 'Granstand' game or not. Do have an Acetronic 1000 from it's first year of release, though I think the 'sticks need a bit of attention. And my Hitachi Nicam Stereo video machine dates from '96.
Top

. I say 'had' because it came out of storage for a little test and since last being used a few years ago, the CMOS battery on the motherboard had died. The fact that it lasted around 15 years seems like a miracle itself.

Anyway, couldn't replace it and with it being dead, the computer didn't recognise any of it's hardware or the OS so it was useless. The battery itself was obsolete and soldered onto the board itself so after salavaging a few bits off of it (such as the ancient RAM and Pentium II CPU), the whole thing was sadly skipped

The interesting thing is that the PC said to replace the CMOS battery on the start-up screen and yet neither the owners manual or technician's manual (the latter downloaded from the internet) gave any indication on how to do so. Perhaps with the battery's huge life, the makers didn't expect anybody to ever get to the stage of wanting/needing to replace it? I dunno...just a shame to bin something so old that was otherwise fine.

It wouldn't have been too difficult to desolder the old battery and replace it. Shame it went in the bin really. But if you don't know how too, or don't have the equipment for, this type of job binning it seems the only option. Unless you give it away for recycling.
Top

r0jaws wrote:It wouldn't have been too difficult to desolder the old battery and replace it. Shame it went in the bin really. But if you don't know how too, or don't have the equipment for, this type of job binning it seems the only option. Unless you give it away for recycling.

I got my Dad to check it out since he's had years of soldering experience repairing boards for household appliances and he didn't think it would be easy. Like I said though, there was no information on what the replacement battery was and the computer itself was extremely hard to get any info on at all. It's already been binned now as part of a clearout anyhow. A damn shame still.

i tend to use it to play dos games and games that need win 9x its loaded with win ME
( finding drivers for this thing under 98 is impossible ME at least has a load of drivers available )
hey wait ! i got a new complaint !
Top

One of my TI99/4A home Computers - 1981
All cartridge based games for it work fine, but I'm struggling to get the tapes to work. Which is a shame. 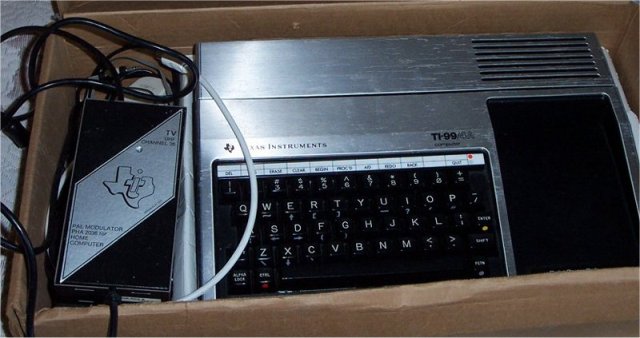 Probably the pride of my collection, tbh. Check out the joysticks: 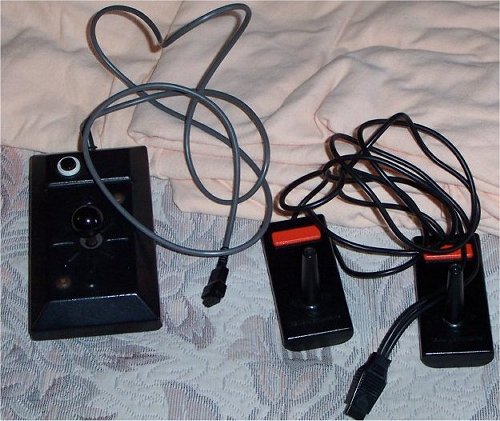 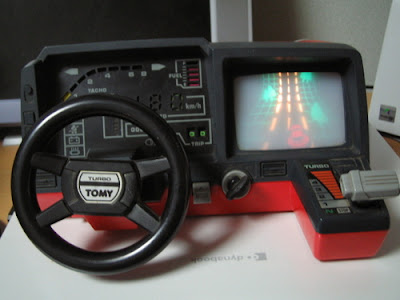 My dad's Aiwa sound system must be as old as me at least, and I know he has one of those old reel-to-reel sound systems which must be from the 60s at least.

i had that dashboard !
well not exactly like that
the screen of mine was bigger ( same display though ) and the lay out was better too ( screen behind the steering wheel )
i dont remember if it was by tomy though

mine looked more like this http://www.tesouvienstu.com/te-souviens ... -dashboard
dunno if it was the corvette though
http://www.youtube.com/watch?v=OmVaZ2jRUvU
hey wait ! i got a new complaint !
Top

Im not as old as most of you so my old stuff owned from new, Im a chronic fettler though so Ive got alot of vintage stuff that Ive restored or Im in the process of doing, current oldest WIP is a 1940 Pilot Major Maestro which partially exploded in my face when I last worked on it, oldest working unit is the 1951 HMV 1122 (little known fact is HMV started its life as The Gramophone Company and primarily manufactured Gramophones and classical music records), theres a 70's system in the loft Ive yet to test that my dad got with his first apprentices wage so I guess that would possibly class as our oldest item that still works (possibly), other than that is my yellow DMG gameboy or Saturn as I know my Coke can Walkman was post them and most of my other stuff I havent owned from new so it doesnt really count.
Watching you sleep since 1990
Top

Wow! I love the way this site keeps helping to dust off some long forgotten memories stored rights at the back of my mind. I had one of those! I remember getting a very large and heavy box from my Aunt for Xmas one year and being really excited about what it was. I remember it tool a ridiculous amount of batteries and practically ate them. I think i used it in a "Lets see what happens when you throw this out the velux window of the attic room onto the patio below" competitions I used to have with friends back on the pre-teen years.
Top
Post Reply
44 posts