Page 4 of 8
by AC
As been mentioned, Knightmare was an absolute classic. I sometimes pray at night for a DVD!

Reboot was also brilliant. Unfortunately also never released on DVD in the UK (to my knowledge), but I've seen imported copies on eBay go for hundreds.
by RobinElvin
Yeah, Knightmare. Complete tripe but it was VR and D&D together, man!!

Micro Live was great and fuelled my thirst for computer-related TV in a time when anything about computing was a rare occurrence.

Cheggers Plays Pop, Godzilla (the cartoon), Tarzan (the cartoon), Battle of the Planets. I remember Words & Pictures with "The Boy from Space" who wrote in mirror image and the other drama they did called Dark Towers.

Talking of school programmes we also watched "How We Used To Live" which was about a family from the 1920s-50s. Oh, and I'll never forget being off school sick and watching Living and Growing - scared the hell out of me! (Well, I was only 7!)

Saturdays was a channel hop between Swap Shop and Tiswas (strangely, I liked them both), then Saturday Superstore, No.73, Get Fresh and I also remember the Buster Crabb Flash Gordon and the spaceship with a sparkler up its jacksie...

I also remember one evening on BBC2 there was Ludwig, an Eastern bloc cartoon about a Faberge egg with legs and a violin (oh those crazy commies) followed by Harold Lloyd "a pair glasses and a smile" (and a plastic hand too, actually) then Delia Smith and Citizen Smith followed but that was a bit too grown up for me so I probably went and played with my replica MP40 machine gun or other toys that they've banned now.

The Bionic man was of course replaced in later years, Lee Majors career-wise, by The Fall Guy which was on before Family Fortunes IIRC. (Am I normal remembering all this stuff?)

I also looked for Star Fleet DVDs but had to resort to slightly more dubious methods to obtain it....ah, the internet

by Hungry Horace
Knightmare has been mentioned, but what about The Adventure Game? My whole family used to love this, although I was only 5 or 6 at the time. We used to have dinner early so we could all gather round an watch it.

I used to really think that BBC micros could speak (as in the computer maze puzzle section) and used to find the end race against the vortex quite daunting.

Watching it again on SKY has made me realise how atrociously it has aged, but how pioneering it was at the time.

RobinElvin wrote:I also looked for Star Fleet DVDs but had to resort to slightly more dubious methods to obtain it....ah, the internet

Over the years there have been a couple of compilation tapes released and you can get the Japanese original - X Bomber - over there but nothing on DVD here yet. I'm sure it's only a matter of time, though.

Cue Brian May's version - Star Fleeeeet!
by Randall Flagg
There was some really freaky kids TV going on in the 80s.

There was something on Sunday afternoons about this girl living in a house haunted but the victorian gost of "Alice".

There was also another series on during the week where a bunch of Cuy Fawkes dummys came to life and beat this guy up.

Used to totally freak me out and give me sleepless nights. By those standards kids TV now is pretty lame!

Randall Flagg wrote:There was some really freaky kids TV going on in the 80s. 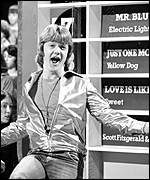 by LeeT
I used to like 'Cheggers Plays Pop' when I was a kid - It felt like those kids shows only lasted for a few programmes before they got axed.

LeeT wrote:I used to like 'Cheggers Plays Pop' when I was a kid - It felt like those kids shows only lasted for a few programmes before they got axed.

Cheggers plays pop enjoyed a few seasons b4 it was axed i seem to remember.

They always had a big inflatable for the last game and used to let the teams go nuts on them at the end of the program. Always wanted to be there on the inflatable with the other kids.

Ah Cheggers....Where did it all go wrong?
by koopa42
A-Team, Knightrider and Airwolf are the best - FACT

Gobots, Manimal and Automan are possibly the WORST

Plus many more I cant think of at the moment

oh moomins too
by koopa42
and D&D, centurions, battle of the planets

LeeT wrote:I used to like 'Cheggers Plays Pop' when I was a kid - It felt like those kids shows only lasted for a few programmes before they got axed.

Cheggers plays pop enjoyed a few seasons b4 it was axed i seem to remember.
[/quote[

Just my childhood whizzing by!

Randall Flagg wrote: Ah Cheggers....Where did it all go wrong?

Randall Flagg wrote: Ah Cheggers....Where did it all go wrong?

Isn't that where it goes wrong for everyone??

by TheShend
Anyone remember Round the Bend?

Well there's some clips from some of the send-up mini cartoons they had on youtube.com Check out:

False Teeth from Beyond the Stars

Weeman and the Masters of the Loonyverse

by felgekarp
You can't go wrong with :-