How about a piece on the electro-mechanical games that predate Pong and Computer Space? Arcades weren't empty before video games came along, and they also weren't all fruities and pinball. Back in the 60s and 70s coin-op games were all projected film and lights, physically moving objects, chain drives, solenoids and model helicopters. But the history of mechanical coin-op games goes back even further, to the 1920s. There's a lot to cover, but the web is awfully short on good information.
Top

I'd like to see this. There are so many instances where these games replicate the gameplay of their video successors (or vice versa).
The Retro League - Where skill isn't an obstacle
Retrocanteen, home of the unfairly banned

A visit to the arcade on the end of Southport Pier would definitely be recommended if you want to see these types of amusements in action. 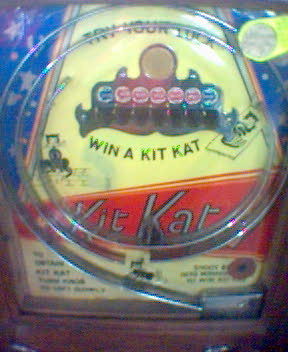 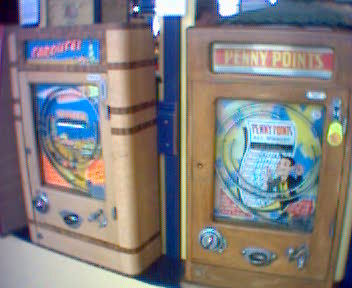 The kids loved this... much more fun than a modern arcade, and a damn sight cheaper.

No, not these amusement machines. I think for RG you're looking at games, not non interactive systems.

The ones that stick in my mind are a 'flight sim' where I could control a plane on a wire around an enclosure, mechanical shooting galleries reminiscent of the later videogames like Sub Hunter and the 'rolling road' racing games.
The Retro League - Where skill isn't an obstacle
Retrocanteen, home of the unfairly banned

I visited Southport pier a few weeks ago. Good fun at the end.

However, for EM games then the guy that own Brean Leisure park collects them along with pinball machines. He displays them to the public because it's better to have them in use and he's run out of space at home.
I took loads of pictures of his EM gun, driving, flying and shooting games. (And had a few goes of course!) They are SO cool. I would love one (or three). In many cases I've included a link to Youtube to see the game in action. There's some great videos of these old EM games in action.

Check them out. I visited last Friday.

And of course I'd love an article!
Top

I'd love to see a museum of some of those old wooden amusements. There's supposed to be one in the arches under the promenade in Brighton, but it's always been shuttered up whnever I've been down there.

I agree about them not really being in the same league as the rolling-road and moving projection type games though.

Of those electro-mechanical ones, an awful lot were shooting galleries, but it's interesting that many of them used mechanical means to relay the gun position to contacts inside the cabinet, rather than use a light and sensor arrangement. Presumably so it's harder to cheat or impede the system.

I have seen video of someone who's built a lunar-lander type game that moves a physical model around a scene instead of having a display, although it is computer controlled. I'm very keen to try adapting one of these games myself. I see the game logic could be similar to the sort of thing that goes into Game-and-Watch type LCD hand-helds. The use of gears and cams to make enemies move is clever, but you have to have a clear way to quickly remove a player from the field if there's any chance of collision. Probably why there are so many shooting games, as there are no physical collisions to worry about snapping something off its stick.
Top

Antiriad2097 wrote:No, not these amusement machines. I think for RG you're looking at games, not non interactive systems.

The ones that stick in my mind are a 'flight sim' where I could control a plane on a wire around an enclosure, mechanical shooting galleries reminiscent of the later videogames like Sub Hunter and the 'rolling road' racing games.

I agree. I'd love to see a feature on the old games that featured model planes, helis, cars...the ones that had a revolving reel of pictures and painted sights on the screen to shoot tanks...those old coin ops that had the rifles on the front to shoot the pirate targets etc...
God they bring back some fun old memories.

I distinctly remember in Barry's amusement arcade in Portrush there being, amongst all the slot mahines and one armed bandits, one of those projector style clay pigeon shooters with what felt like full sized shotguns. But then, I'm sure I saw one of these still operating in Brighton not long ago.
Top

The electro-mechanical stuff were my first arcade experiences on holidays in the '70s. Really inventive, lots of black light and fantastic artwork. I've hunted high and low on t'net for info but apart from http://www.pinrepair.com there's not much out there

Be great to have an article but they really are best experienced 'live'.
Top
Post Reply
9 posts • Page 1 of 1