How do you get the bloody stats screen to pop up? I sat there waiting for a minute or so after entering my initials.

Just do F10 and wait until the highscore table comes up.
Or if you have highscore saving, then just close the game and open it again, as it comes up straight away.
My Arcade Superplays
Top

Phew, finally cracked the one mil. 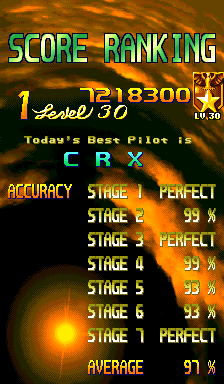 15 mins til end of game and season. Sorry i havent been more active in updates. Busy times. I will do all the relevant stuff tomorrow.


Would just like to congratulate Smraedis on winning Season #2 and say a big thank you to everyone who took part. i hope you had fun and didnt lose too much hair playing some of these games. Here's to Season #3 being even bigger, hopefully a few new players enter and we play another bunch of great games.

Enjoy the off season break, we'll be back on the 1st of May. See you then.

Even though people seem to have lost steam in the end I guess this season was great, with a good variety of games. The mix of old/new school was a nice one.
As usual, it was only because of the league that I played some of these games as I wouldn’t have done it otherwise, at least not so soon.

Blazing Star – superlative shooter, one of the games in the season I wouldn’t have played for myself (wanted to tackle Pulstar first)
Ketsui – brutal yet beautiful and highly rewarding
Gradius III – kinda epic in its duration, but fun if you’re into long games and you’ve got the time to spend on them
R-Type II – respect is due for the least loved chapter in the series
Metal Black – I’m still not too fond of this one, IMO it’s clunky and overrated
DoDonPachi – I guess I could’ve scored higher if it weren’t for the pressure of looping it in two weeks; but it did feel good to chain the whole 2nd stage

Strikers 1945 – timing gold ingots for a higher score made the game considerably harder
Exed Exes – how can such a primitive game be so tough? I like it very much anyway!
Scramble – maybe too old for some people, but a guilty pleasure of sorts for me
Rayforce – wasn’t expecting to do it so soon, but it was good to revisit this one; hard without being unfair, unlike its wrecked sequel
19XX – very fun game, too bad that the final days coincided with the Easter holidays!!

Congrats to our fellow Smraedis for finishing 1st place, beating all these games isn’t an easy feat!

Had a huge amount of fun when I was able to put some time in. Standouts for me were Rayforce and 19XX, just brilliant games. I know it wasn't everyone's cup of tea but also loved that older gems like Scramble were in the mix, had a different vibes to everything else.

Looking forward to next season!

wish i played more in the contest props to smraedis and all the others love competing against you guys, can't wait til may got this, retro league, hopefully still marp, and got my contest starting up if anyone is interested i am giving away steam games to top 3 teams.
Top

Really can't believe I won the league, I thought it was over when I couldn't clear Rayforce.
Thanks everyone, I'm happy I got to learn some more games, and relearn a few too!
My Arcade Superplays
Top

Bugger, I completely forgot about this. Submitted one whole attempt, and then *bamf*, forgot.

Too many shiny games and things distracting me.

Oh well. We'll see what happens with the next one.


Hmm, some thoughts about the games though.... more in here that I'd actually play than in the previous season.

Ketsui of course is probably my favorite of the group, though of the Cave games that I like, it might be the one I'm worst at. Damn game never agrees with me. That horrible boat in stage 3 is my bane.

19XX is an old favorite, though I have to say.... it seemed MUCH easier than I remembered it. It seems like it'd actually be a fairly easy 1cc, so I might take some time to do that.

Exed Exes was a very pleasant surprise, I ended up quite liking this one. The only problem is that it is kinda long. But it's one I'll be going back to.

Scramble is.... Scramble. When I voted for it, what I was actually thinking of was Super Cobra; I always get the two confused. Scramble to me isnt as good, but still quite enjoyable, though for reasons beyond my understanding that wall section has *always* thwarted me. Can get through crazy bullet hell crap in other games without trouble.... cant get past a damn wall in this one. Yyyyyup.

Blazing Star was pretty good. That one's always fun. One of those games that never gets the attention it deserves.

And finally R-Type 2; I wont do it for scoring play, but played as a survival-only sort of shmup, it really is very good. A classic series.... I wish they still made these.
Top

Very happy with my 3rd place, wish I could have got a score in for the last game but I just didn't have time.

Beat my goal of finishing in the top ten, so I'm happy.

Obvious high points for me were R-Type 2 and Gradius 3 getting #1 position but actually playing one of my favourite shooters Metal Black in competition was ace.

The most enjoyable shooter for me was Layer Section, it's such a fun game.

Low points were Exed Exes which I thought was completely soulless and unremarkable - it was like an extended caravan game and Scramble, but in a perverse kind of way even the latter was fun.

One credit, no continues. Arcade defaults across the board.


Please submit all scores in the following format:


Bonus Points: 3 points awarded to any player who 1 Credit clears the game.

Welcome to Season #3 of the league. hope you have all enjoyed the break and are ready for some good healthy competition.


The results for the voting were as follows incase anyone was wondering: