Smraedis wrote:I think the chain meter drops at 60 fps while the game isn't always running at that?

Nah, that doesn't happen. The problems are: uncovering bees with your laser doesn't refill your chain gauge, and holding the laser on a large enemy and then destroying it doesn't refill your chain gauge either. Fully chaining stage 2 is impossible bacause there's parts where you have to hold your laser on a large enemy and as soon as you destroy it your chain breaks. My max 175 chain comes from the first half of stage 1.

The only reason I managed to get 25 million was because I managed to no miss no bomb the first three stages (apart from 1 bomb right at the end of the 3rd boss), so I was getting my maximum bonus all the way through stage 3. Score at the of stage 3 was about 18.5 million, which shows you how bad I did on 4 and 5.
Top

And I heard so many good things about PS1 Dodonpachi...

Aren't you able to play in MAME or in a different platform?
Emily VanCamp oh yes!
Top

kollisionBR wrote: And I heard so many good things about PS1 Dodonpachi...

Aren't you able to play in MAME or in a different platform?

The PS1 DoDonPachi looks and sounds great, just the flaws I mentioned that stop it from being really good.

Unfortunately I don't have the game on another platform and I can only play games that I own because I've no computer at home (hence no MAME). It's this that stop me from participating in every game of the Shmup League, I can only play what I've got.
Top

Considering my skills, very pleased by this attempt; though disappointed that I got no further into the game than my last posted score. Just not remembering to bomb when things get kerrrrrrrazy. And annoyed the Hell out of myself following this score in trying for bigger and bigger bonus scores by collecting bees and all stars. I know I'm just being greedy, but....

And on a few occasions I have managed to get the first boss to drop 8 or 10 large stars, but have no idea how I did it and died trying to catch them all. Greedy, again.... ALso, although I sometimes clear the boss without dying, I don't always get the extra few hundred thousand bonus points for doing so.

Seen your run on Ytube, SM. It's your first level I'm trying to emulate. Only 2mill so far, though. And Prometheus(ArcadeExpert) makes it look like a walk in the park! Sheesh! Nearly 500mill points!

Good fun, this game. Grown on me a lot, despite the similar gameplay to others played to-date.
Last edited by Sputryk on Wed Dec 19, 2012 7:49 am, edited 1 time in total.
Top

What's this? Sputryk getting into cave shooters?

Glad you're enjoying it mate. I really should get some play in on this. Just 2 credits so far

Glad you're enjoying it mate. I really should get some play in on this. Just 2 credits so far

I've played through the whole of the first round (no loop as I cannot achieve the required grades), and am confident that I will never get beyond L4 boss - it has cost me so many Continues just to beat that Boss. However, I have enjoyed getting to where I have (mid-point, L4) so will keep trying to increase my score where possible. That Boss and beyond are just beyond my mortal capabilities. I don't find anything lame about DDP. I see good progression of toughness and a suitable array of enemies without any radical changes, a good layout with nothing 'unnecessary' or sneaky. And I have finally gotten to grips with 'bullet dodging' (to a degree, anyway). I am not a historian, but I see either the influence of GigaWing in DDP, or where DDP took ideas from. And that is the only problem - it is a little too similar at times to feel like a different game (though I think I will always choose GW over DDP given a choice).

I'm not likely to maintain a Top 5 position, but I'm pushing hard for 6th!

I might not vote for a Cave shooter, certainly if it is up against an 8-bit or other worthwhile throwback, but I'll give it my best and enjoy.

Sputryk wrote:I might not vote for a Cave shooter, certainly if it is up against an 8-bit or other worthwhile throwback, but I'll give it my best and enjoy.

* crikey *
Last night I barely beat your previous score as I had a heroic fail against the last boss.
I ended up on my last life with no bombs and dodged its last pattern for like 5 seconds before getting hit... I was 1 pixel away from beating him, and was utterly devastated by all the stupid things I had done on that run.

But alas!
I think there's still a little time to get closer to you.
Emily VanCamp oh yes!
Top This game is still going? Feh. Thought this one would be done by now.

Message me when this one is done, if ya dont mind, lest I forget to check. Aint been very active on the forums as a whole lately (despite the browser always loading the site when it starts). It's unlikely that I'll join in the next round either, but I'd at least like to see what games pop up for voting.
Top 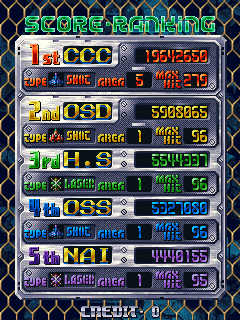 I'm way to busy to be playing games but I managed to get a quick go in. It's been a good while since I've played this and that reflects my score! Oh dear!

Well, I don't know if I'll have time tomorrow for some last attempts and this score isn't really a worthy improvement...
But I thought it'd better to finish with a loop high score. Well at a total of 5 credits for DDP, i'll have to take what I could get.


Under 4 hours til deadline!