Burning Force on the Megadrive for me:

A true travesty of a Space Harrier rip off it's slow, unresponsive, ugly, and almost unplayable. Beautiful anime art though


image taken from www.segagagadomain.com, great site check it out
http://www.youtube.com/user/gmintyfresh

Game art is not important to me in the slightest.
The dry fart for Barry MacDermot and all the cancer patients in the Glamorgan testicle ward
Top

Not important to me at all.

It might make me take notice of a game on a shop shelf, but when I get home I am hardly going to sit staring at the box all night.
Top

Its only important for games you don't know much about. Usually I'll have a vague memory of a title before picking it from the shelf, but now and then the box art catches my eye and I'll scan the back to see what's what.
Its not nearly as important as screenshots are for the final decision though.
The Retro League - Where skill isn't an obstacle
Retrocanteen, home of the unfairly banned

It used to be important back in the days of Mega Drive and NES, because you couldn't really just look the game up on the internet, find reviews etc. You walked into the shop and looked at the covers and you pick those games up first. Nowadays if a good game comes out you just see adverts or you know exactly what it's like with the internet via Youtube, forums whatever
Top

It is very rare I would buy a game that I don't already know about, so it probably isn't important anymore.

Couldn't care if the game came in a lovely box or a dustbin. I always wait for reviews from reliable sources and base my buying decisions on that, as well as a chance to play a demo or whatever.

That doesn't mean I don't appreciate some of the absolutely fantastic game art out there though...
Compilation64 | Oldschool Gaming | Arkanix Labs
Top

only import nuts are worried about western box art ...
Top

Take a look at Rise Of The Robots & Assassin's Creed, great artwork cover & promotion but rubbish or average games when you load. Ok AC being much better than ROTR but for what you think you are going to get when first looked at, it will let you down badly in my case anyway becuase I know a few people in the forum like AC.
Top

It's not so important that it's a deal breaker, but I do take notice. For example if I see a certain game on the shelf and there are copies for both the Megadrive and SNES, I'll usually take whichever has the nicer box art (providing they're not the same, obviously) unless there's a discernable difference in the games themselves. Same with Saturn and PSone games, although there's more likely to be a difference in the game as the PS generally did 3D games best and the Saturn excelled at 2D.

It's not OVERLY important, but I'd like a quality game to come in a quality looking box.
Loading "sig"

I have bought some games in my time where the cover art has been highly misleading i.e. what you see on the front cover does not always represent on what the game actually is. So yes, I think Cover Art is highly important.
Top 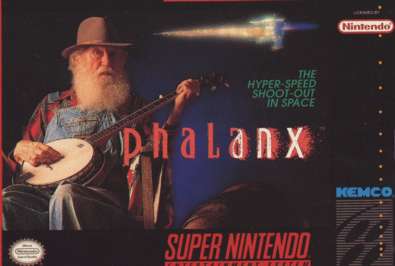 That's a classic what a ridiculous cover, I've got a copy of this and it's even more stupid lookin in the flesh!!
http://www.youtube.com/user/gmintyfresh