I bought the Megadrive version of 'Adventures of Batman and Robin' the other day expecting to play a similar game to the SNES version I enjoyed years ago. Unfortunately, it's a completely different game and no where near as good. It's still a side-scrolling 2D beat-em-up, the graphics are excellent, as is the animation but the it's just far too difficult and repetitive. The enemies never seem to end. And you have to go all the way back to the beginning if you die!

It's just a shame that the SNES version commands prices of £30+ on ebay! Guess I'll have to stick to emulation for this one (and wish I'd done that with the MD version before I bought it on impulse!)

I should have known better really as the Mega-CD version is just a poor repetitive driving game (although it does have great presentation!)
Top

The best I've ever managed to do on the MD version of Adventures of Batman and Robin was make it to the Mad Hatters stage (Level 3). That level is brutally difficult from the offset and accidently choosing the wrong weapon can really screw you over big time. I really do love the Snes version though, great cast of characters and levels ripped right out of the Animated series.
My Complete Megaman/Rockman collection: http://retrogamer.net/forum/viewtopic.php?f=2&t=26485 *Updated 22/05/2011*
Top 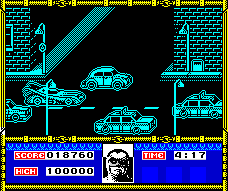 Which ever one this spectrum version is.
Top

Batman the Movie on Amiga, tough game as I recall! Part of the Batman pack released in 1989.