Another legendary arcade game hit the scene Space Invaders, which was launched 41 years ago in June of 1978! This perennial arcade favorite has remained popular in retro gaming circles ever since.

We’re taking a look back at this wildly influential video game designed by Tomohiro Nishikado who took inspiration from earlier games like Breakout and Gun Fight.

Gameplay: Space Invaders is an early fixed shooter game. You control a spaceship with a single blaster for taking down waves of enemies. The enemies begin their assault in a tight formation and scroll from left to right. Each time they reach a side of the screen they begin to move faster and faster. Weapons fired by enemies and players alike can break down your defensive shields, so caution is key to maximizing defensive strength. Check out a video of gameplay here on YouTube: https://www.youtube.com/watch?v=MU4psw3ccUI

Tips: StrategyWiki has a lot of additional info on the game, as well as steps for the Furrer Trick, which can guarantee the player a maximum score for each mystery saucer kill. Find their guide here: https://strategywiki.org/wiki/Space_Inv ... alkthrough

Play: For anyone who missed out on Space Invaders in the arcade, it’s still available to play in your browser as a Flash game. There are quite a few options out there, but a good recreation can be played here: http://www.free80sarcade.com/spaceinvaders.php 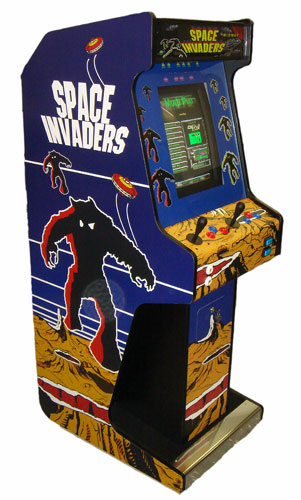 Space Invaders was several years old before I ever set foot in an arcade, but it was still a ubiquitous machine to have. I dumped a lot of time and money into this game as a kid.While gaming has certainly evolved over time, it’s good to get back to basics from time to time.

Did you get to play the arcade version of this classic?

We’d love to hear from you!
Top

Goodness, how many times has that last one been the bane of my existence?
There you are, making excellent progress in staving off the invasion of earth by an alien menace, and you're down to only a handful of the galactic fiends... only to have the very last one accelerate to terrifying speed as it beelines towards your base. Even know, hearing that low thudding bumping music speeding up as the pixels dart back and forth and each laser shot misses trips an adrenaline rush.

This game was awesome.
Top

Yeah, this game was and still is such a classic. I wonder how many people still play this game the last time that I have was probably several years ago. It feels like its been ages and this serves as a reminder for me to play this game again sometime soon since its such a beloved classic. The 70s,80s,and 90s were the golden era of the arcade platform no doubt about that.
https://www.youtube.com/channel/UC78Jx4 ... gnbVM6Tp4g

My youtube gaming channel speedruns and no deathruns of both classic and modern games.
Top

I've played it a few times - it seemed a permanent fixture of a traveling tivoli in the 80s. And it never really gripped me as I had seen newer games before it. Monumental point in gaming history, censored game in itself. (Much like I also don't like Pac-Man.) Took until Galaga before shooters got good.
Top

Never heard of it, is it any good?
You can follow me on Twitter https://twitter.com/DaveySloan
Sponsor Me http://www.justgiving.com/daveysloan2014

This game is really where the art on the cabinet had a major impact. If you contrast this with others, the arcade cabinet style is a little less than motivating. The logo is great, the colors are good - but the depictions of the invaders are a little off. In some cabinets by Taito / Midway, they are these amorphous blob humanoid things - in others they are stompy looking army men.
Top

I loved it at the time, but we were young and hadn't really seen anything else at the time.

My game of choice was Zork, so anything that had images really blew my mind back then.
Top

Probably still THE iconic game for me, the one that started the passion. Pinball, mechanical games, Pong- all fun- but this was it
Top
Post Reply
8 posts • Page 1 of 1