I bought an Apple II game still shrinkwrapped on Ebay, and it was the first time I had seen an old floppy disk in a while. God it bends so easily! I never realised how fragile they feel, and it wouldn't take much to damage one. The Americans never really used cassettes for loading games, and much of central Europe didn't either, but I think tapes are better because they are much cheaper and feel a lot more durable to me. I pulled out a dusty old Commodore tape from 1986 and it still loaded. I'm not sure you could do the same with a dusty old floppy disk.

So which of the two formats did you prefer in the 80s - cassette or floppy? And also, is there anybody on this forum who still actually uses 5¼" floppies in 2018??
Last edited by Spector on Thu Jul 05, 2018 5:04 pm, edited 2 times in total.
The Retro Gaming Discord channel. Every Sunday from 9pm- click this link:
https://discordapp.com/invite/Tphe4UH

I started with Apple II with 5 1/2" floppies and when the Vic 20 came along and then the C64 where I had tape systems, I felt it was a distinct downgrade. Don't get me wrong - both tapes and floppies were the bane of my existence back then suddenly not working when you most wanted them to, but I definitely preferred diskettes.

The cheaper ones you'd have 1 or 2 faulty - by default - in any pack of 10. With Verbatim for example you'd rarely come across a faulty disk. But being a poor, and desperate kid, I'd always take my chances with the no-name stuff. And drill holes in the corners to make them double-sided. And ruin perhaps 2 more disks in a pack of ten leaving, on average, about 6 good disks per pack of 10.

May they NEVER, EVER, EVER COME BACK!!!

At least not floppies or tapes.

....but having said that, boy it'd be great to fire up an Apple II again.. has been decades.
Top

How much more expensive were floppies over cassette games though? In Australia it might be different than over here, but they were twice as expensive, right?
The Retro Gaming Discord channel. Every Sunday from 9pm- click this link:
https://discordapp.com/invite/Tphe4UH

hmm.. I have to try and remember. A box of 10 3.5" floppies was about $10 for the cheapos and $20 for the better stuff. In pounds I would imagine it'd be about half those figures. Tapes, the cheaper ones were about $1 each and the more expensive ones about $3.50. So roughly thereabouts the same in cost.

I despised tapes because of the fiddly-ness, the endless aligning and datasette issues. But overall I think tapes were more reliable. The commodore datasettes were more of an issue.

The Apple II floppy drives were fantastic.. they worked really well for a long time. I cant say the same for what I experienced when I had a pc shop, the amount of floppy drives I had to return.. but that's just an aside. Here I would say, overall, floppies were more popular than cassettes, just on the whole with computer systems.
Top

Nowadays, you'd be mad to use either given that you can get flash drives for pretty much all old computers and consoles. I'd definitely go with the floppy back in the 80s though. The drives were expensive but they meant that software loaded within seconds rather than taking minutes, and they were so much more reliable at the time.

Floppies only really developed a reputation for unreliability during the early 90s, and there were several reasons for this. Capacities went up without any changes to the underlying media; they just fit ten times as much data on there using different heads and encoding methods. Prices for both disks and drives went down and the market was flooded with cheap no-names with even the big brands lowering their standards to compete. They also switched from being a storage media to one that was primarily for distribution. At least in the PC market you'd buy software on floppy to install to a hard drive, so they only had to work once. Machines like the Amiga and the ST, which typically didn't have hard drives, suffered rather more. Even then I'd think that around 90% of my ST games still work to this day.

Anyway, the first machine I had with a disk drive was the CPC6128. I still bought most games on tape though because there was £5 premium per game. Instead, you could usually load from tape once, and dump it to disk with a Multiface; you could typically fit six games per disk, and the disks were only about £2 each if you bought them in bulk. The only time I would actually buy a game on disk was if there was an enhanced version, like Tau Ceti or Sorcery, or it was a disk-only game like Pirates.

I didn't have a disk drive for the Spectrum, but if you could transfer a game to Microdrive you could get the loading time under 8 seconds which was just as good. They were far less reliable though and a lot of games couldn't be transferred because the Interface 1 reserved extra RAM that some of the larger games would try to use.
Top

I only ever used tape. There was a 3" floppy drive for the Oric, but I've never seen one in the flesh and it was very expensive and I had no income of my own at that point. It didn't matter anyway, since I've still never seen an Oric game on disk, only tape.

Spectrum was similar, in that it had microdrives, but again cost and lack of games made it sort of pointless. I did have a cart game, which was better than both, though they were restricted to 16k games back then iirc.

C64 floppy was an option, but the drives cost more than the C64 itself. No way was I laying down that sort of money. I did have a friend with one and it was sort of neat, but realistically I can't say it overly hindered me on tape at least initially. There were a few multi loads I'd have loved to speed up (Gunship for example takes half an hour to get to the game on tape), but by the time I could potentially have afforded it, I just didn't consider it viable, especially with the ST and Amiga taking over. If I did want a quick load, once again I'd stick in a cart game.

Usually if I was playing a multi load tape game on C64, I'd have something else loaded on the Spectrum, so I could swap channels and play that while the C64 did its thing (or I'd just listen to the music and flip through Crash or Zzap!).

On cost grounds, I'll go for tape in this thread. Tapes had their downsides, but were cheap and easy to copy. Disks were too expensive for the hardware, disks were expensive and limited in capacity compared to tape, with only minor advantages in most cases. So tape it is.
The Retro League - Where skill isn't an obstacle
Retrocanteen, home of the unfairly banned

I used disks for school (Apple II) and tapes at home (ZX81, Spectrum) before I moved up to C64.

I liked both for different reasons, the cassettes from the POV they were sturdy, and I must admit being less ethical then like kids were, swopping C60s loaded with games with school mates.

But, I liked Disks for the speed of loading, for the likes of Castle Wolfenstein, and I loved Infocom adventures which I had plenty on Disk for C64.

Neither... the high quality 3" disks are the way to go 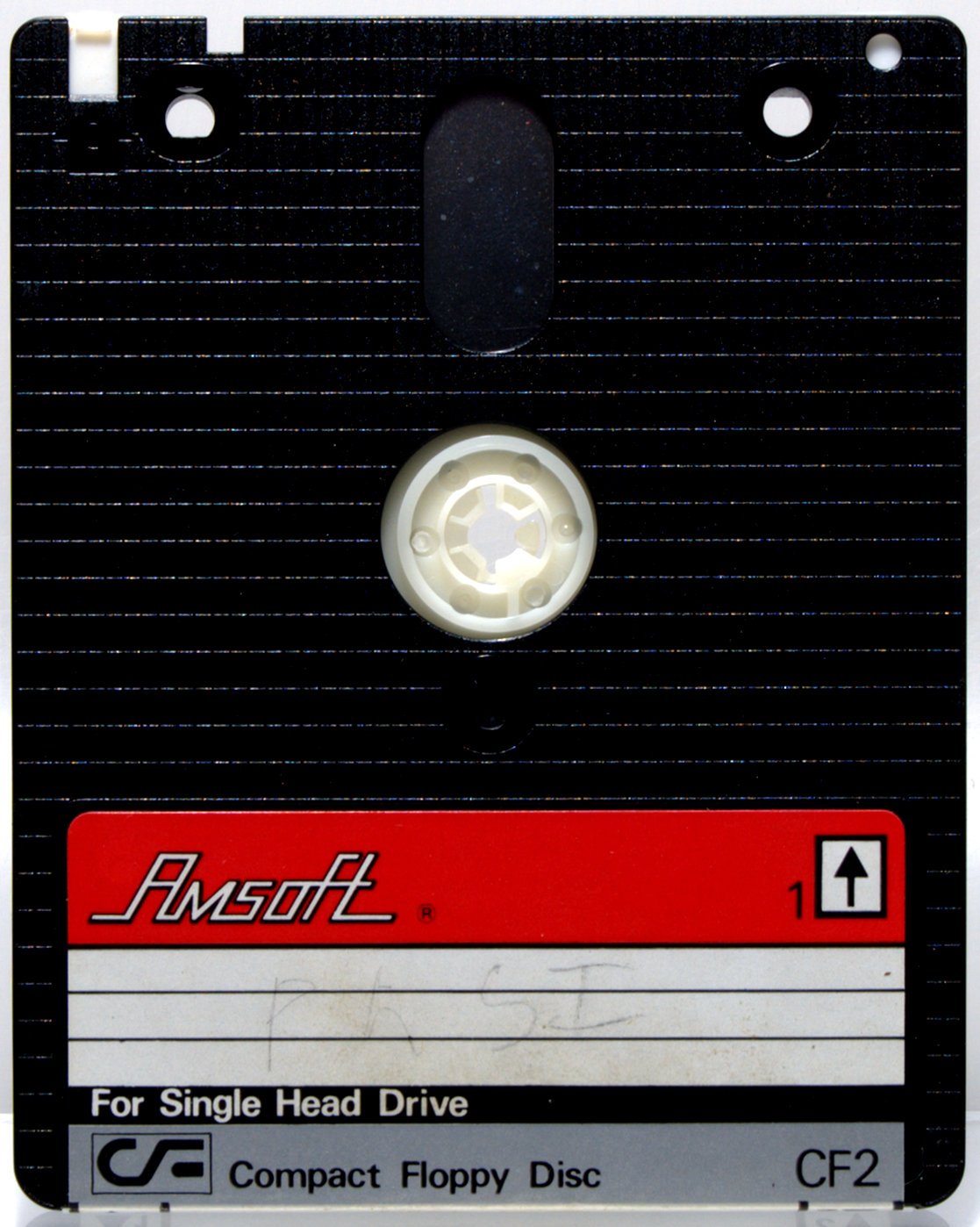 The Amstrad CPC 6128 was my first machine and the only draw back to the disk format was the cost. In the UK a typical full price cassette was £9.95, and the disk version was £14.95. Worth the extra fiver in my opinion as they've stood the test of time. The belts on the disk drives themselves often need replacing, but a 'well looked after' 3" disk stills works perfectly.

I was pleased for the cassette alternative though, otherwise I wouldn't have enjoyed the £1.99, £2.99 and (eventually) the £3.99 budget releases.

Yeah, the 3" disk was certainly the best from an engineering perspective. It's just a shame that they didn't catch on and, Amstrad aside, few hardware manufacturers were interested in them.

The rigid case made it far less prone to accidental damage then the flimsy 5.25" ones and the shutter mechanism - being internal - couldn't fall off like the ones on the 3.5" disks did. We kept a set of long nosed pliers handy at work for fishing them out at work throughout the 90s.
Top

I can't really recall having much exposure to big floppies (shush...) when they were about. I had a C64 with the datasette device, so virtually all my games were tape, or the occasional C64 cartridge on that system.

Sadly, my C64 is broken, and although I own loads of tape games still, I couldn't verify if they still work after about 30 years! The long load times were a pain, but it was fun having epileptic seizures watching the loading screens flashing away.
Top

I’ve only ever used tapes, don’t think I’ve seen a floppy only in the adverts of Computer and Video games with that little kid breaking them.

All my C16 and C64 games still work perfectly (except the C16 Real Stunt Experts), which may not be a real C16 game. If I had a spare £200 I would buy that ultimate usb drive
"Crush the Old Order and CREATE A NEW SOCIETY!"
Top

I would say cassettes, but only because they were the main media I was exposed to in my youth. The only time I used 5 3/4 disks was at school on their BBC Model Bs.
NES/N64/GC/Wii/WiiU/SMD/SS/DC/PS1/PS2/PS3/PS4/Xbox/360/OneS/PSP/3DS/PSV
PSN: learnedrobb
Top

difficult one for me

Tapes for me. Couldnt stand those 'big floppies' (ooh-err)

Must admit when i had a Speccy +3 i did love those disks though, even more so once i bought a Multiface and could press the red button to copy any game onto disk. That was amazing at the time
Top
Post Reply
50 posts