The first game you EVER played on your 8-bit computer.

matt wrote:Harrier Attack on the CPC464. Followed by Cluedo.

Good lad, Roland on the Ropes was my 3rd and Oh Mummy! my second!!
http://www.youtube.com/user/gmintyfresh

Gift From the Gods on the Speccy

(it came with the machine)

One of the next ones I played, though, is still a favourite: NOMAD

Spannerman and Laserwarp on the Amstrad CPC 464 in february 1985. The early CPCs didn't have any games bundled, I believe they started including them for Christmas 1986
Top

I cannot remember well... it could be "Hungry Horace" or "Psst", or perhaps an Investronica-labeled space invaders clone on my 16K Speccy (later upgraded to 48k, of course), if we talk commercial software, but my absolute first was the breakout clone that was inside the educational "Horizons" tape given with all Spectrums. I remember its Spanish name..."El Muro".
Back in those years, it seemed almost a miracle to me that i could connect my older brotherÂ´s radio-tape deck to that thing called "microcomputer" and load and save things from and to...

PS: I played many times a game called R Tape Loading Error, i think is the most ever played game in the Speccy

Elite on the Beeb (disc version) which I still own. The disc and the computer.

hmmmm......Donkey Kong and Mario Bros with my first Speccy i got. Both pack in games and both quite good
JSW's Guff Emporium! <- My bit of t'internet.

It's between Batman (the Jon Ritman version) or Head Over Heels on the CPC 6128 - these came distributed with the CPC 6128 as part of the Dixon's 10 of the Best compilation.
Top

Either Arcadians or Hopper on the Electron 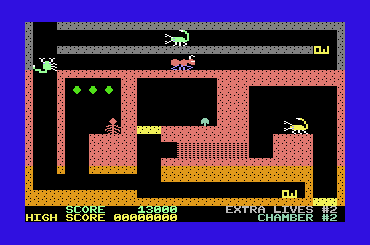