Can anybody name me any games where the last level forces you to fight previously defeated bosses in a boss rush mode.. The only one's I can think off are

Is this mostly exclusive to the 16 bit or scrolling fighter genre does any current or last gen games use this mechanic?
"Crush the Old Order and CREATE A NEW SOCIETY!"
Top

As for newer games, Vanquish pretty much has boss rushes. They're not as formally structured as the 16 bit examples you give but there are frequent examples of enemies that were, for all intents and purposes, bosses early in the game that return later more powerful or in greater numbers.
Top

Every single Megaman game ever created pretty much. Though tecnically the NES release of the original game spread the returning bosses out over a couple of levels all subsequent Megaman, X, Zero etc. games all have you fight bosses again in the teleport chambers.

The Yakuza series does its own thing like this. Nearly all of the games have a optional challenge mode that is unlocked after the game is cleared and the last challenges on each game are always boss rush modes which range from easy (Ishin) to darn right evil (Yakuza 3).
My Complete Megaman/Rockman collection: http://retrogamer.net/forum/viewtopic.php?f=2&t=26485 *Updated 22/05/2011*
Top

Space Harrier does it with its final level.
The Retro League - Where skill isn't an obstacle
Retrocanteen, home of the unfairly banned

There's a few ROM hacks from the last year or so that turn the Mega Drive Sonic games into boss rushes. Lots of fun to be had there.
My comics blog (mostly lesser-known UK stuff from the 80s and 90s)

^- Blast! That's the only one I could think of!
Top

Plenty of examples for this.

Most scrolling beat-em-ups have boss characters become regular opponents a few levels in (Double Dragon, Final fight). Spiderman & Venom in Maximum Carnage on the Mega Drive goes really over the top with this- basically by the later levels all the later enemies are just former boss characters but weaker, except one level where they all attack one after another back at full power.

Zelda games usually have them too- Ganons tower in Wind Waker being the one I most remember.

X-Men Legends 2 has you face all the horsemen again before you get to fight Apocalypse.

Gradius games usually do it differently by having a level where you face a boss rush against bosses from the previous game in the series. So in Gradius 3 you fight a bunch of guys from Gradius 2 etc.
Top

The brilliant Actraiser on the SNES has a boss rush as it's final level, great way to end that particularly epic title. 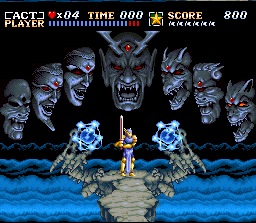 Viewtiful Joe has a level towards the end which is basically all bosses. I got stuck on the last one.

Wasn't Ghost'n'Goblins had a Boss Rush level before the main boss came in?

The final level of Streets of Rage 2 comes to mind with previous bosses returning in the (annoying) elevator section.

Also can't forget the Pokemon League stage in any of the games which is basically 4-5 bosses in a row. At least you can save between them though.

Fantasy Zone.
Darius Alpha - Got this one on my PCE everdrive, but not got round to playing it yet, must do that soon.
Top

Shadow of the Colossus is arguably an entire game of boss rush...
Lie with passion and be forever damned...

Mayhem wrote:Shadow of the Colossus is arguably an entire game of boss rush...

More of a Boss Meander that one, but if you're having it I'll add Chaos Field on Dreamcast.