by kelp7
Just wondering, after experiencing a particularly nasty crash of Sonic All-Stars on the Wii U the other day (whole screen turned to corrupt screen memory / white noise and the sound was a continuous very loud tone sounding a bit like a constant Atari 2600 crunchy noise), anyone remember any particularly excellent / weird / bad / or just plain funny crashes on any games you've owned in the past?

[EDIT] : On a personal level, another amusing one was when a friend and I were programming a 1st-person perspective 3D maze game, a bit like a 3D Pacman game around '92 or '93 on his Amstrad PC and when we were testing it out something weird happened which we hadn't predicted in the workings of the code where we rounded a corner in the maze only to come across the back of our own character's head. Utter weirdness at the time...

by Negative Creep
I remember managing to crash Playstation Doom by going to the Courtyard and seeing how many monsters I could get on screen, only for the whole game to go into a text dump

by samhain81
The only crash that still haunts me to this day.

I can't remember what boss it was (Sniper Wolf?). Well, it was just after having beat her and you go through the door with the sudden prompt to insert disc 2. With no reason to suspect anything dodgy, I put in disc 2. Low and behold, Snake is stuck in the door and refuses to move. If I moved him slightly, he turned back around prompting me to put cd1 back in. After about 20 dozen attempts in hope that it would recognize the transition, and unglitch itself, I gave up. Suffice to say, this was the end of my relationship with Solid Snake. No way I was going through that again

by outdated_gamer
I'm a PC gamer so I'm used to crashing games...

by Megamixer
I've had a few but nothing too exteme. The last I had was when playing Dukes of Hazzard: Racing for Home on the PS1 for the purposes of a review. Was trying to blast through it quickly as it wasn't too difficult and nearly 2 hours went up in a puff of smoke when the game just froze on a black screen as it attempted to load in the next level.

by Treguard
I remember EA Rugby 2005 on the PS2 being so badly made kicking for touch ended up with the game being stuck on an endless loop showing an empty stand, not responding to anything you do. Reseting was the only option.

by thingonaspring
this isn't epic/major/nasty etc, but since i only read it the other day, i thought it was quite amusing: 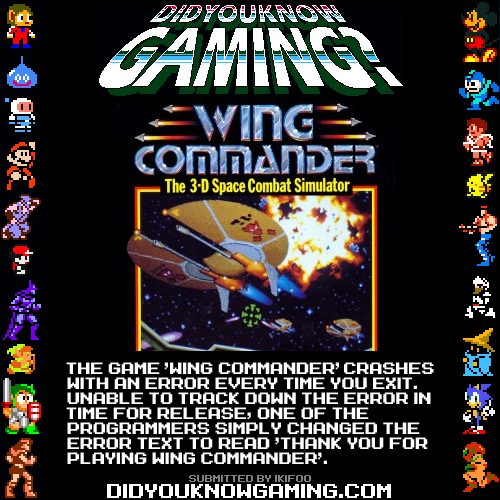 by flatapex
Indycar racing 2 on pc. Think it was the road america circuit.

by quangdx
I was rocking the Double Dragon arcade machine down at the Four Quarters Bar,
Threw and elbow on the boss fight of level two and the game decided to freeze and flip upside down.

by Misery
.....okay I had one I was going to add to this, but the upside-down Double Dragon there caused a brain crash instead.

That's one of the best things of that sort I've seen, I'm totally saving that image.

If memory serves, I did a move and then became trapped by the wall and couldnt move...game just froze up

by Negative Creep
Never had it myself, but apparently there is a bug towards the end of SNES Jurassic Park that will freeze the game if you open doors in the wrong sequence. Oh, and there are no passwords or continues, so it's right back to the beginning after you reset.......

by gunbladelad
I've had quite a few Theme Park DS crashes related to the Roller Coaster. Simply put, when you're getting messages to replace it due to the age, if you close the ride then delete it, the game crashes. I've found the only way to avoid it is to have poor sods actually on the ride when you delete it - but that often has the result of the unhappy punter being glitched to outside the park (usually off to the left) bringing down the happiness rating of everyone.

While not a crash, I've had quite a few funny glitches occur on AvP2 on the PC - usually linked to the Xenomorph's wall-walk ability.

by playzooki
i once caused a massive pileup on Nascar 09