Most unforgiving jumps in games?

Manic Miner is famed for the literally pixel perfect jumps you have to make on some levels, but Technician Ted has whole screens full of them. The game gives you something like 32 lives, but you need every one of them just to get through the first few tasks.
Top

shiftytigger wrote:The Dock in Revenge of Shinobi. The whole level is a nightmare but there is one long jump in particular that caused rage quits and controller damage. The rest of the game was great but that one part - even with the jump magic - just sucked so much. When I submitted a guide to Mean Machines Sega I played that level to death to find all its secrets but never did I die more than the long jump bit.

To this day still more challenging than the waterfall level jumps.

So there's worse to come AFTER the waterfall? Terrific

I knew id talked about that with someone. The dock has a jump that requires a precise leap over distance rather than height so the jump magic doesnt help. Also the ninjas leaping out of the water dont help.

Would be higher in my favourite MD games list but those 2 jumps can really take it out of you. Best thing to do is spend a while grabbing the 2 lives at the start of the factory level, most of the time dying as you get them. Its slow but easy way to build up lives.

Thinking about it, there's a horrendous jump in Shinobi X on the Saturn as well, somewhere on the mine cart level. Right towards the end of it as well, and if you mess up it's right back to the start. Evil, nasty games those Shinobi things!
My comics blog (mostly lesser-known UK stuff from the 80s and 90s)

There are some truly evil jumps in SMB - The Lost Levels.
A level where you have to run at top speed and make many huge jumps in succession, with a strong wind blowing towards you.
And one of the later castle levels, where you have to build up speed to do a super jump,
and then land on that ONE freaking block over the lava pit.

Batman 3D and Head Over Heels. Absolutely love the games (Head Over Heels especially) but quite a few pixel perfect jumps required in them, not made easy by the isometric viewpoints that really throw off my depth perception at times.
Sig pic temporarily removed...The Magnificent 7 will ride again

RodimusPrime wrote:A couple of the jumps in TMNT on the NES were a nightmare

Asterix on the Master System has a really nasty set of jumps near the end of the game which involves a series of perfect timed jumps between falling platforms, the jumps really have to be perfectly timed otherwise you fall to your death. Despite how many times i've finished that game, it still gives me trouble to this day

The Star Wars games on NES and SNES were full of nightmare jumps too numerous to mention, but I think the worst one for me is in Super Star Wars inside the sandcrawler - it's the run up to the boss from the platform that drops down meaning you have to jump away from the lava to the few smaller jumps when the screen goes to auto scroll. I always lose a couple of lives there!
Yours sincerely, the little voice in your head that talks when you read.
Top

Theyre not impossible jumps but the jumping mechanism in Ghouls n Ghosts on the bit where you have to stay on a raft and jump over obstacles always frustrates the hell out of me...you want to jump forward yet you can guarantee you ll jump straight up instead.
Top

Pretty much any first person game that involves jumping, you can't judge where you are in comparison to the edge of a ledge and even know how far your jump actually clears to gauge when you should go. Metroid Prime was a pain for this.
Top

SpockIOM wrote:The Star Wars games on NES and SNES were full of nightmare jumps too numerous to mention, but I think the worst one for me is in Super Star Wars inside the sandcrawler - it's the run up to the boss from the platform that drops down meaning you have to jump away from the lava to the few smaller jumps when the screen goes to auto scroll. I always lose a couple of lives there!

Ditto.
And staying on the SW theme (although nowhere near as good a game) I seem to recall pretty much every jump in Jedi Power Battles, particularly the rooftop level, was just painful. Possibly more to do with the general sloppiness of the game than actual 'fiendish' level design.
Got to add another vote for Head Over Heels and Batman too - brilliant games, but I never could get the hang of jumping and judging distances in those isometric games...
R Tape loading error, 0:1

this bit on Dizzy, basically there should be two bits of floor there connecting the grass, but if you go too close to the middle then the entire thing disappears and that fu#ks up the rest of your game because you can no longer get across the gap. Many, many, many, many, many, many etc times as a kid that bit annoyed the hell out of me! (still managed to comlpete the game at least once in my life)

SpockIOM wrote:The Star Wars games on NES and SNES were full of nightmare jumps too numerous to mention, but I think the worst one for me is in Super Star Wars inside the sandcrawler - it's the run up to the boss from the platform that drops down meaning you have to jump away from the lava to the few smaller jumps when the screen goes to auto scroll. I always lose a couple of lives there!

that bit on super star wars is really buggy (but at least its a bug that helps the player!) - I've landed in the lava loads of times on not died on that bit - you can just jump straight back out!

I thought climbing the outside of the sandcrawler is a pain in the ass.

the first batman game on the megadrive (by sunsoft) - I've tried it a few times on emulation, I can't get past the first pipe bit on the second level, batman just can't get across the gap. there must be some sort of super jump I don't know how to do.
Top

All jumps with this stupid thing. It was the reason I have never completed the game 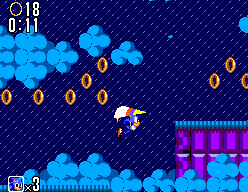 I hope the person who thought this implementation was a good idea, lost his job.
Top

I second that Sonic 2 on SMS. It just doesn't work. At all.
YOUTUBE GAMEPLAY VIDS
http://www.youtube.com/user/CrudeBoy666/videos
Top

First game that gave me nightmares due to harsh jumps was Montezuma's Revenge on the Apple II.
Blagger on the C64 defeated me.. left me in a pool of tears if I can recall,
Tomb Raider, I just couldn't finish any of those, all that jumping left me forever more hating jumping games
But I would say the worst ever looks to be a Simpsons game on the NES, I think it was Bart Simpson Vs the Space Mutants, I saw a video with the AGVN playing it and there's a level that is simply crucifying, you have to jump some, I dunno, 300-odd times, each jump (for me anyway) a tough one... that was just plain stupid on behalf of the programmers. Insane. I mean, where's the fun in that??? Just obscene.
Top
Post Reply
64 posts