OK. I've been thinking long and hard about this.

Back in the day for about six months the only PC set up in one of the major department stores was an Amstrad.

Sometimes I would get a feel for a game on it and buy the C64 version.

Most of the time I didn't get stung too badly. (I bought Jet Set Willy 2 on the C64 on the basis of the Amstrad one and although it looked and sounded roughly the same it just never felt as 'right' as it did on the Amstrad.)

The one sting was The Rocky Horror Picture show.

OK, the game was no great shakes in the first place. It was a fairly drab collect 'em up.

I was probably taken with the surreal 'drug' room with the menacing syringes.

But what was an average looking game on the Amstrad was turned into a woeful looking one on the C64.

I quite enjoyed Rocky on the Speccy

Do not press this button....again!

(That's the sound of disapproval as well as your name

At least on the C64 you get FLESH. On the Amstrad, you get yellow/green/blue skin according to what room the character is in!
merman1974 on Steam, Xbox Live, Twitter and YouTube
Top

A brilliant arcade game was ruined by a home only sequel that destroyed everything good about the original in such an organised way you'd almost assume it was deliberate. Paperboy 2 was slow, fussy, contained about 3 different houses that repeated endlessly and on the SNES looked worse than the Master System version of the original game.
Yesterzine - The Literal Magazine Show
http://yesterzine.co.uk | @Yesterzine on Twitter | yesterzineshow@gmail.com
Top 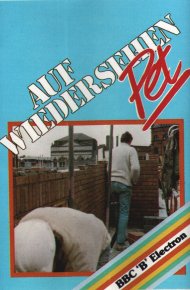 Absolutely horrible game. Three crappy little mini-games with stick-man graphics, hopelessly unresponsive controls, and just absolutely nothing to make you want to play on. The controls were so bad, you could die in each mini-game within about 2 seconds of starting, before you'd even managed to make your character move in any direction of your own choosing.

It would have made a below-par magazine type-in, even back in 1984, but it was an absolutely appalling full-price release. Elite and Revs came out that year, FFS.

Tynesoft, to their credit, became a really good software label 2 or 3 years later. This was an absolute travesty though.
Top

I'd like to think that the top left of the cover is so bare because they were waiting for some brilliant reviews to come in so that they could plunder a couple of quotes.

(That's the sound of disapproval as well as your name

At least on the C64 you get FLESH. On the Amstrad, you get yellow/green/blue skin according to what room the character is in!

Would like to put a vote in for Ghostbusters on the Spectrum. Completely ruined Christmas '85 for me. The game that finally made be go and but an azimuth screwdriver so I could get the swine to load. Then - oh my days.
I loved the file (Still do!

) and was wetting my pants with excitement when I got this, but JEEEEEEEEZ it was terrible. The "Driving to the Job" part was supposed to be like Spy Hunter I suppose, but when your car is HUGE and there are no other vehicles on the road, it's not that challenging. At All.
And the "Catch the Ghost with Particle accelerators and Ghost Traps was just random cr@p - weren't you unable to move your man once the beam was fired, or some such nonsense?
Anyway - needs to go in sokme Mexican Desert Landfill for my money.

Back To The Future II (Sega Master System)

Oh dear god. What an absolutley loathsome pile of grannies grundies. A promising license, (who wouldn't want a hoverboard?) albeit a slightly ropey movie, was the only thing going for it. Doomed from the start by the fact the end of the second film is left wide open for the third, this detestable testicle was marred by awful hit detection, a hoverboard that couldn't travel up kerbs, and blocky graphics not seen since the speccy. Thank god it was given to me with a bundle of other games. I feel dirty for even trying it in the first place. And double thanks for the cheat so you can skip levels. It only took up 10 minutes of my time.
I tried to find a screenshot, but none where available, and I'll be damned if I'm wasting my time taking screenshots.
Top

Shao Lin's Road on the Spectrum.

I used to play it on a cocktail cabinet in our local pub as a wee lad and I loved it. I still do. It was a simple game, but challenging with controls that are spot on.

The Spectrum version was none of those things. I excitedly bought this when it came out for my 48k friend and to this day a game has never disappointed me more.

The flying kick is near impossible to pull off, but when you managed it you fell down a platform. Usually on top of a foe, leading to an unfair lost life. In the arcade original you could kick whilst jumping up and down platforms - It was the most effective method of dispatching the baddies. They chose not to include it on the Speccy.

All this made the game near unplayable.
Top

I really liked the Speccy one. I picked the arcade game for the retroleague last season on the stregnth of the Speccy version.

PS - Nice ambulance!
The dry fart for Barry MacDermot and all the cancer patients in the Glamorgan testicle ward
Top

Sport of Kings is a good party game for when you're too drunk to actually do any gaming - you all just yell at your horse on telly, requiring no co-ordination at all but it feels good. We used to get very competitive with our gambling on that.
The Retro League - Where skill isn't an obstacle
Retrocanteen, home of the unfairly banned