by RUOK
I'm well into Shinobi games at the moment, I've been playing through Shinobi III on the Mega Drive Collection for the 360 (as I don't have the cart) and I'm loving it. I've also had a quick blast on Revenge of the Shinobi last night and for the time it was released that game is just a master piece.

What are your favourite versions of Shinobi or it's sequels? Do you prefer the original arcade version? Is Ryu from Ninja Gaiden a more bad ass ninja?

Also, I'm losing the will to live with MS games at the moment, first I can't fly the hang glider in Sonic 2 now I can't get past Mandara on the MS version! I am just not fast enough?

Anyone else have this problem? Anyone got any tips? 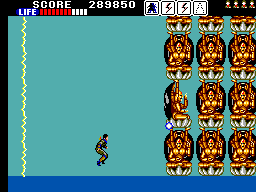 by theantmeister
I loved the original in the arcade. There's just something about the controls, the way the fire button seems directly wired to Joe's ninja star throwing arm. *tap* *shwoop*

I can never get past level 3 though. That game is tough!

by silvergunner
Loved the first apart from the last level where you cannot continue if you die which I hate as I'm not that good and cannot be bothered doing repeat runs of the game. Loved revenge of shinobi much more. Probably my top ninja game I would say. Take up real hang gliding for real it's easier

by greenberet79
Game Gear Shinobi was, is and always will be my favourite! Hards as nails though. And the sequel was even harder!

by nakamura
Couldn't get on with Revenge unfortunately though there are parts of it I do like. However I have been craving some Shinobi X on Saturn recently. Remember really enjoying the visuals and terrible cut scenes.

RUOK wrote:
Anyone else have this problem? Anyone got any tips?

On the original arcade version, you shoot all of the first row out apart from 1, then jump on top and 'into' it, (as there's only one in the row, you can jump high enough to get over the top of it) and you know how he goes all 'ow ow ow ow' when you run into certain things - you tap the joystick right-right-right-right-right as fast as you can and you 'ow' through them all and come out the other side.

by adippm82
Shinobi X and one of the Game Gear games are the extent of my experience with the series, found them just a bit too hard for my liking, did not get very far in either of them to be honest, the former is still a good looking game IMO, although as already mentioned the cut scenes are pretty ropey.

by Mootown
If you've not played either the original proper Arcade version of Shinobi, or Revenge of Shinobi on Megadrive then you haven't really seen Shinobi properly, in my opinion.

nakamura wrote:Couldn't get on with Revenge unfortunately though there are parts of it I do like. However I have been craving some Shinobi X on Saturn recently. Remember really enjoying the visuals and terrible cut scenes.

Shinobi X is superb, and doesn't deserve the "reputation" it has. I prefer it over Revenge of Shinobi, certainly!

Shinobi III's my overall favourite - doing those wall jumps and all that. THINK I'm up to the last level now (fighting that guy with the long hair).

As for the Master System... Alex Kidd in Shinobi World's probably the best out of that lot. What with the first boss being a not-so-subtle Mario, ho ho.

by batman877
There was some good Shinobi discussion in my 8-bit comparison thread a while ago...

by samhain81
The only ones I owned/played as a child were Revenge of Shinobi, and Shinobi X, both of which still hold a very special place in my heart.

After having played more of the Shinobi games over the years, my opinion still remains that Revenge of Shinobi and Shinobi X were the best.

I really liked Shinobi III's change up in gameplay style but it felt like more of a race to the finish than a well structured platformer like it's predecessor.

by imaxeroker85
Shinobi indeed was a huge part of my early gaming history, I had Shinobi on the MS and i loved that game, probably the game i was best at I had for the system. I loved it, and played it for hours at a time, I can still memorize that first level down to a tee. I downloaded the Arcade version on the 360 for 400 points years ago, and while it was similar it didn't feel spot on to the MS version I remembered.

I never really got into the sequels, I had Revenge of Shinobi or Shinobi 2, on one of those 6 game cartridges that came with the MD console, but i didn't get into it as much as i did with Golden Axe, SoR and Alien Storm.

But damn, i remember that first game as being a classic, and the hours and hours of fun i had with it. Dammit with all these MS games being brought up I am dying to buy a MS again.

by DoraemonTheCat
My thoughts on the series :

Shinobi (Arc) - The first time I saw the arcade version was in our local Leisure Centre. Thought it was a really cool looking game. The standout moment for me was actually the sound. This machine had the sound at what must have been it's highest level - and it sent shivers down my back and my hair stand on end when he used the magic. To see a bunch of clone shinobi's come out and blast across the screen was amazing...but that sound was just INTENSE. Loved it. I know play it via CoinOPS 5, but I still (please don't laugh) have not managed to get past the fist boss - the one that spits the fireballs.

Revenge of Shinobi Gen/MD) - Was a day one purchase. Of all the Genesis/MD games first releases, I rate this the best game and even better than SoR. Has the perfect learning curve, memorable end of level bosses, lush graphics and another truly inspired soundtrack. Still play this today and it just has a charm that is hard to ignore.

Shadow Dancer (Arcade) - Although I liked the central premise - having a dog to send to kill enemies (is this the game that inspired so many of today's youth?) I found it a chore to play on later levels. As well as being a bit too difficult, I found everything else to be rather average.

Shadow Dancer (Gen/MD) - This is more like it, much better than it's arcade namesake, thanks to better level design and not as difficult. Only the last couple of stages are really hard. Still, just doesn't have the same feel of Shinobi/RoS.

Shinobi III Gen/MD) - A worthy sequel to RoS. A HUGE game that incorporates some really cool ideas. Ninja on a boat, check. Ninja on a horse, check. WHAT!! I'll say that again, just incase you had difficulty comprehending that. NINJA.ON.A.HORSE. Awesome

The Cyber Shinobi (MS) - Oh dear. What happened here. A horrendously abysmal game. Playing this game for longer than a few minutes will bring a tear to your eye. I believe the people that were responsible for this travesty have had their heads chopped off by real-life Ninja's who thought it was blasphemous and downright insulting to their kind.

GG Shinobi (Game Gear) - Fantastic hand-held ninja action. Contains great ports of some of the Gen/MD music too. I love the fact that you have Ninja's with different capabilities and can tackle the levels in any order. Love the car/motorway section. A fantastic portable addition to the canon

Shinobi X (Sat) - Sadly I have not ever played this. Although I would like too. The price puts me off buying a 2nd hand copy and I don't know if it is emulated to a decent standard on anything.

I can only begin to imagine how good a remake helmed by the team at Bomber Games (the team responsible for the amazing Streets of Rage Remake) could/would have been.

by Shinobi
Nice one Ruok

Arcade Shinobi first played this in Porthcawl and thought it was awesome, shortly after big Johns video shop had it; there was always a Chinese guy on there who could 1 life it and no miss all the Bonus stages(he was always on it).. One of the best Shinobi games really tight control and lots of hidden stuff, such as the bonus for doing a level with no Shurikens, and the kids giving extra lives when you had a certain score.. My friend has the arcade machine and we used to take it in turns 1cc'ing it.. Masked Ninja the last boss is very hard and very random.. I still know the route through the last few levels, enemy placement etc.. Masked 'Mushashi looks far cooler'

Super Shinobi I own two Jap copies and a pal version, the Jap art is a thing of beauty.. I saw the screenshots in Mean Mach Machines and really wanted this.. My friend filed my Megadrive and lent me his Jap copy awesome game can still 1cc it using the extra life cheat on the elevator and the infinite Shurkiens cheat (select sound test and change music to 00) Brilliant enemy selection such as the woman dressed as Nuns(who shed there clothes, Disco Ninja and Hulk, Terminator and Spidey.. And multiple endings if you let 'Motako' get crushed by the spikes when fighting 'Zeed' Best design on 'Joe Mushashi' obviously a Ninja should be masked

Super Shinobi2 lso own this on Jap in some respects better but in others worse very little variety in the normal enemies, and some pretty crap bosses like the brain.. That giant Pink Monster in the stomach is awesome..

Super Shinobi 2 beta very different and I'd say the version in the Act Raiser type forest(4 way scrolling forest) was better than the official release if it wasn't so broken and the fourth boss couldn't be beaten without the infinite lives cheat and waiting for it to time out.. You also had female enemies which was strange they took them out as they where shown in the manual)..

Shadow Dancer arcade again I really want to like this but way too hard, and some ropey collision detection the impossibly hard Train Boss.. Could get to the Sewers on 1 credit but never passed them.. Furthest I got was some Ninja Woman boss with Monkeys but wouldn't let me continue

Master System/Nes Shinobi seems odd having a energy bar and 5 lives can't remember playing them, friend says there too easy

Shinobi X Saturn bought a Saturn for this love the cut scene's very easy until the Dojo Boss who you fight on those floating platforms, impossible to damage him.. Very under-rated game...

by Roo
Though I'd consider Shinobi, Shadow Dancer and Return of the Ninja Master to be Mega Drive greats, I wasn't mad about the PS2 or 3DS games. Really disappointed with the latter, truth be told, though it's definitely worth a punt at a fiver on GAME's website: http://www.game.co.uk/en/Shinobi-3D-133 ... A-_-235668
All times are UTC-05:00
Page 1 of 3
Powered by phpBB® Forum Software © phpBB Limited
https://www.phpbb.com/