What are you currently playing?

SpiffierRabbit wrote:Castlevania Aria of something I can't spell on GBA.

Evil Dead and Illbleed, on the DC, crazy games... I love 'em to bits.

Ninja Blade - so far its great fun and outrageously Japanese, its been a while since I played a nuts game like this

To Begin:
The game starts off nothing short of awesome!, the cutscene graphics as you begin with the first mission are indeed an absolute delight... however this is where the games starts and also were there game sorta ends and becomes a complete f'ing nightmare!!

"Controll, Controll... you must Learn Controll.."
I will be honest, the original Dragons Lair Arcade is more responsive and controllerable!!! ugh.... such a pity... the In Game graphics are TOOOO small you can hardly see anything when you are in the distence or even halfway in a static environement.

btw, there is NO zooming or Camera Rotation, you have a Fixed Camera, and thats it >:( 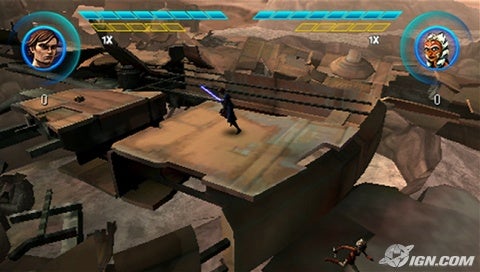 Clearly this game has NOT be designed for the portable screen size!!! epic fail!!! 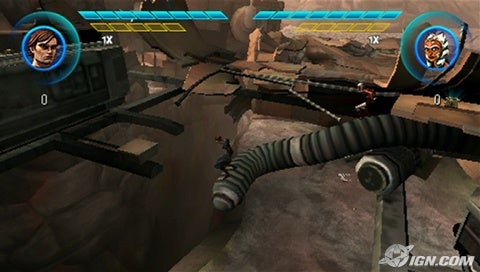 can you spot Anikin, your character?!

yeah the story / cut scense have all that mojo/jazz and a bag-o chips on top, but this gets a poor 2 out of 10 for game play... I have now ardiuously suffered 12 levels....

The game is clearly made for Large screen TV!

I have to admit, as it is to share, the Level / environment design is relatively uninspired, and woefully realised on the PSP... this feels like a Port from another system, with the in-game graphics dropped down a bit. I am very dissapointed, I much prefered the Platform shooter of Clone Wars on the DS!!!

"Need Input.."
Now let me get to the input, what the bloodly hell is going on here?!

The analogue input is way off, i cannot put my finger on it (or proverbial thumb) but its laggy and coupled with a very poor Z depth draw where you think your character is... he (or she) is Not.

Attacking is overly complicated... no target tracking either! with "[]" being attack for jedi, right shoulder being primary for a trooper and left being secondary, with NO use of the DPAD at the moment i have found...

the X has a multi function with the double tap, that *sometimes* works (not my hardware I can promise you) its all soooo wrong!!!

now trying that when your character is only a few pixels big in the distence it nigh inpossible!

then theres the pre-emptive landing for your jedi when you jump.... works only half th time!

"In Closing...."
Ughh.... Its sooooo not fair!!! I wanted wo much to like this game.... what an absolute dissapointment!

Lets hope the PS3 version of the game is better.

Gave some serious hours to MW2 today, starting off with single then multi. Sheer brilliance of first-person shooters.

psj3909 wrote:What next, Scary Movie better than Schindlers List ? What is everyone smoking.

Killer 7 (Gamecube) - I just like this game's artstyle, and it's gameplay.
Top

you know, im still putting in just over an hour a day on final fantasy 7, and a different ps1 game, currently guardian's crusade has me hooked.
Top

It's obvious what i'm playing too, so i won't mention that game! (although the multiplayer really is absolutely, 100% exceedingly brilliant).

Having some fun with Xmen on the Saturn too. It's quite good really, although one on one fighters still aren't my thing.

Also nearly completed Mario and Sonic at the Olympic Winter games on DS. It's been an absolute chore it has to be said. Also playing through lots of other winter games for the article, so am grappling with Winter Games on the C64 (and Wii Virtual Console), Games Winter Edition on the C64 and the game boy Winter Olympics 94.

But really, it's all about the cod.

Last night I played through my newly acquired Atari 2600 games and it was a joyous experience.

Missile command is a WONDERFUL conversion.& is what I spent the most time on, though I think "Mr Awesome" doesn't have to worry about a challenge to his high score from me any time soon!

I seem to have got the US version of Frogger, which means funky colours (or should that be colors!) It doesn't detract from the fantastic gameplay though & I like to think of it as playing with a rare tropical blue frog.

Smurf on the other hand can go suck my plums. I spent about 20 minutes trying to jump over that bloody fence on the 2nd screen, Smurfette can find her own way home.

The 2600 also has a brilliant conversion of Galaxian, up there with the marvellous Space Invaders port, great stuff.

Ms Pacman is also great. Although it is better than Pacman, I still hold the opinion that there was absolutely nothing wrong with the 2600 version of Pacman & it'll always hold a place in my heart!

Defender was a bit too flickery, still good fun though in spite if the migraine it induced!

I could never tell the difference between millipede & centipede. Now that I've got them both I still can't, I'm equally crap at the pair of them!

I didn't bother with Circus Atari as my paddles are up in the roofspace - but they shall be unearthed when the mighty Warlords arrives!

Modern Warfare 2 (obviously) and nothing else for the past couple of days.

Well, since my 360 died again, I've dug out my PS2 and Wii. I tried first Mickey's Wild Adventure, as I remembered I used to find this game easy... well not anymore!

So after a few failed attempts, I decided to turn on the Wii, something which hasn't happened for quite some time... and now it's updating... so basically, up until now, not too much gaming time for me!

C=Style wrote:Modern Warfare 2 (obviously) and nothing else for the past couple of days.

Super Hang on > Modern Warfare 2. You know it mate.

Right now im playing Layer Section for the Saturn. I'm just starting to get into the shooter games, and this one is fun as hell. But kinda hard, since you got both air and ground stuff to keep track of.

I'm also slowly getting back into EVE Online. Just got my Hulk Mining Barge, only 2 months of training to get ...yea i know.