No mention of Sega Superstars Tennis yet then?

Another shout for Jimmy Connors on the SNES for me, it just had the edge over Super Tennis IMO.

However I recently brought Final Match on the PCE and after getting initially used to the pace of it, it's winning me over as well
Top

Sega superstars and virtua tennis for me. Anna Kournakova on PS1 was ok too. I tried mario tennis on N64, you could see it was a good game but i couldn't get on with it.
Top

I still love Match Point on the Spectrum, add Virtua Tennis on the Dreamcast and Smash Court Tennis on the Snes then you have the best three tennis games in my opinion.
"Time fades even legend..."
Top

I have fond memories of Virtua Tennis and Mario Tennis 64 but it's been a long time since I played them so I don't know how well they hold up.

I've been enjoying Mario Tennis for the Gamecube though, and Monkey Tennis on Super Monkey Ball 2 is quite an underrated tennis game.
Pratty's trade list, updated (May 2019)!
viewtopic.php?f=19&t=54823
Top

My first "tennis" game was the one on the Radofin Telesports Mini; basically, a Pong clone. It also did "football" and "squash" in a similar fashion.

The first thing that actually looked like tennis was Match Point on the Spectrum. That not only looked the part, but played like a dream. More recent games, Wii Sports perhaps excepted, are generally just prettier versions of the same idea.
Top

Hiro wrote:The only one I come back to sometimes is good old On Court Tennis for the C64...

Firstly, I'd like to thank snowkatt for buying me a copy of Virtua Tennis 2. I look forward to playing that again!

There aren't many tennis games that I've come across that I don't like. I just think it's a sport that translates very well to computer gaming. My favourite is probably Mario Tennis on the N64 - a minor classic, in my opinion - though nothing did more to rekindle my love for computer games than Wii Sports Tennis did back on Hogmanay 2006. Playing it for the first time in a packed, boozed-up living room was the most fun I think I've ever had playing a game.

There was one on the GBA which I liked - possibly it was World Series Tennis??
"Very soon our luck will change, we'll do what we need to do to win matches, and we'll fly."
Top

I used to love a tennis game on the original playstation, I looked on the net and i'm sure it was Sampras Exteme Tennis.

Man that game was awesome at the time, I remember I took ages on the world tour but reached a point where I felt the AI was just too untouchable. If I remember right I'm sure alonside the normal tennis arena's was a new york street court where you played a pair of pimps, fur coats and top hats and all !

With a license deal like that, you'd expect it to look great but play terribly rather than the other way around.

Played Top Ranking Tennis on the Game Boy to death (which wasn't that great in retrospect). Smash Tennis on the SNES and Virtua Tennis on the Dreamcast were great, loved the minigames of the latter especially.
Top

I like the tennis mini-game contained in Sega Game Pack 4 in 1 on the Game Gear. 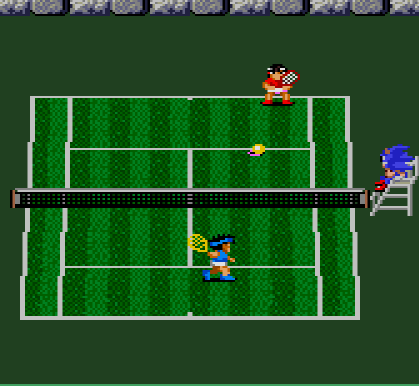 Spector wrote:I've said it before and I'm gonna bore you by saying it again - Final Match Tennis on the PC Engine is one hell of a game.

I will go one further than that and say that it is the pinnacle of the genre. Followed closely by super tennis on the snes.