Does anyone have good memories of this game? From Lucasfilm(or Lucas Arts).

I had 'Ballblazer' for my C64. In 1 player it was pretty dull, but two players it was fun. A nice variation on a football type game. Plus, those colourful squares!

I haven't played the 'Masterblazer' conversions on the 16 bits. I did have a PD does game based on it for the PC. That was pretty good. Even allowing for using the keyboard! 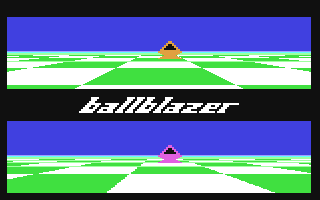 There was also a remake of the original, called: 'Ballblazer Champions' on Playstation 1.

Anywho, the originals:Had it 1st on A8, never saw what the fuss was about to be honest, just seemed dull, tried C64 version few years later, thought i'd give it benifit of doubt etc, still nothing.

Guess games just not me.

I have played most versions of this and absolutely LOVE the Atari 7800 version which is definately the best of the lot.

Not only does it have amazingly fast 3D graphics but a POKEY chip in the cart for better sound too - http://www.youtube.com/watch?v=YSSWTY_VH4s

I'm sure I played this, or something like this in the arcades but can't find any reference to it being arcade.
And no, I'm not thinking of Air Hockey

Greetings Mortal, Are You Ready To Die?
Top

Spent many evenings playing Ballblazer on a sinclair spectrum.
Just charging into the other player the over to the goal posts.
Back and forth.
How can something this simple be that much fun.
http://aso.bi
the science of play
Top

The Atari 800 version was amazing when it first came out. It's still graphically much faster and smoother and more impressive than the C64 version, and the sound was better too.

I did the graphics for an obscure SNES game that was intended originally to be Ballblazer 2, but the licensing deal fell through, and it was released as 'Space Football - One On One' after some changes to the graphics. It was rubbish.

SIR'86 wrote:
I did the graphics for an obscure SNES game that was intended originally to be Ballblazer 2, but the licensing deal fell through, and it was released as 'Space Football - One On One' after some changes to the graphics. It was rubbish.

Now why cant all games designers be this honest ? Im looking at you Molyneux