That was a fantastic price for it.
Top

I really enjoyed 007 Legends, admittedly it's not the greatest fps that ever was, it's not even the best modern era Bond game either but it is fun and it is enjoyable to play thru the different Bond films. As a big Bond fan I enjoyed it, my only beef is the long load times between losing lives (at least on PS3) for£3 it's well worth a shot.
Top

I'd actually been looking at other stuff on the shelf and noticed that it had fallen down a gap behind the shelf so I fished it out and took it home. It could've wound up there for months or years unseen otherwise.
Where logic won't work, I will
Top

i usually have no luck in charity shops but picked this up yesterday for a couple of quid. Not seen it before. They have however done the usual thin strip of sellotape all the way around the box that will no doubt mark the box should i attempt to take it off. 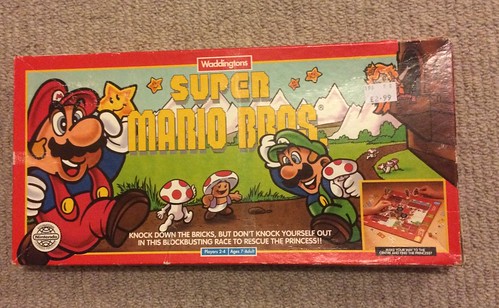 Sellotape isn't very sticky, you should be able to steam it off without damaging the box. Don't overdo it though, you don't want to soak the card and have it warp.
The Retro League - Where skill isn't an obstacle
Retrocanteen, home of the unfairly banned

Always include Cash Converters when you are looking around charity shops. Some of my best finds have come from these, especially the smaller ones.

But as with all this type of searching it's very hit or miss.
Why not visit my ramblings at Garry's Gaming Blog
Top

GarryG wrote:Always include Cash Converters when you are looking around charity shops. Some of my best finds have come from these, especially the smaller ones.

But as with all this type of searching it's very hit or miss.

true theres a cash converters next to one of the charity shops i visit and they have a small selection of ps1 and ps2 stuff got 4 ross noble dvds from there yesterday for a quid each. As for today i picked up 4 more ps2 games for my small collection The Sims,Prisoner of war were £1.50 each from beacon centre for the blind and picked up The Sims 2 Castaway and Max Payne for 99p and £2 from st giles hospice (big shop does furniture etc)

the 007 Legends was gone, but I found of all things a Game Gear cart (Super Off Road) for a quid. figured it was worth picking up for when I find my Game Gear
The Artist Formerly Known as Timothy Lumsden...
Top Sold my well played copy for the xbox recently for £20. Great game, not played it on pc though.Looks like there are some decent mods
Top

what windows do you use ThingOnaSpring? I'm always wary about picking up PC games as I'm never sure if they'll run on the dreaded Windows 8
The Artist Formerly Known as Timothy Lumsden...
Top

Why not just make a multi-boot PC, or run virtual PCs
Why not visit my ramblings at Garry's Gaming Blog
Top

Well I got a mint Gamecube Sonic collection (all the Megadrive Sonic's) for 50p my jaw just hit the floor when I saw it... They also had about 30 PS2 games surprisingly not a single sports game but the usual GTA games as well as Underworld, Myst 3, Killzone, Black, Red Ninja, Avatar the last Airbender and some others.. They had several PS3 sports games and loads of Wii Girl games and something called Safecracker.> Just got Red Ninja regret not buying Wii Safecracker as it sold quickly..
"Crush the Old Order and CREATE A NEW SOCIETY!"
Top