QuantumCrayons wrote:Got Ultimate Ghosts and Goblins today.
WHY is is so hard?

DoctorForbin wrote: the Ghost/Goblins/Ghouls games are pain and suffering on any format......

This is worse than the first GnG game; I could at least beat the first stage easily in that.
Top

Tried one of them on a friend iPod touch - madness ensued.....

Is anyone buying Fate/Extra (out today in the States)? 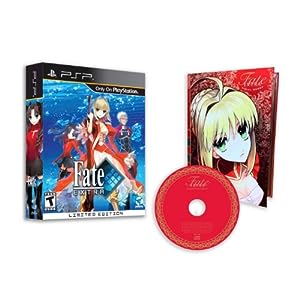 Another nice PSP box there! Shame I'm not into roleplay games, I love the boxes.

Been playing Chinatown Wars all weekend. I've had it for ages and tried it but didn't get along, but it just clicked last week and I'm really into it. It has to have some of the nicest graphics on the machine (although sometimes it's hard to see what's going on if you're racing through the streets). The music is really impressive too, even if it hasn't got the recognisable pop from Vice City.
"Very soon our luck will change, we'll do what we need to do to win matches, and we'll fly."
Top

Morkin wrote:Is anyone buying Fate/Extra (out today in the States)?

Hopefully, what's in the limited edition, though?

My copy of Gladiator Begins arrived today. It seems like quite a competent fighting game, and I've enjoyed what little I've played so far.
Top

I got Call of Duty Roads to Victory. Not bad, and if you like WW2 games (and boy do I!) then you'll enjoy it. Not a patch on MOH Heroes 1 and 2 though.
"Very soon our luck will change, we'll do what we need to do to win matches, and we'll fly."
Top

DoctorForbin wrote: the Ghost/Goblins/Ghouls games are pain and suffering on any format......

This is worse than the first GnG game; I could at least beat the first stage easily in that.

I still don't understand the reputation for difficulty they have,.. I mean, yes, they are hard, but they're 'fair' in a twisted kind of way. Practice makes perfect. I still remember the look on my older brother and his mates' faces when I beat Super GnG on the SNES, and that was only the first pass! They nearly passed out when I went round again and got the proper ending.

For my money, Ultimate is one of the easiest (apart from the WonderSwan title).

Tried the Colecovision version? Think it's called Ghosts 'N Zombies. They had it at Eurocon this year (or was it last year?), and as you say, practice makes perfect! Couldn't finish it, mind, but got further with each go.
My comics blog (mostly lesser-known UK stuff from the 80s and 90s)

Just looked it up, looks good. I'll have to give it a blast, but the controllable jumps make it look quite easy - I think that's probably one of the harder aspects of the original.

Got hold of three very nice PSP games in the last couple of months, all with extra bits and bobs (art cards, soundtracks, etc.): Trails in the Sky, Persona 2: Innocent Sin and Persona 3 Portable.

I was playing P3 to death on the PS2 and have a 60 hour game on there at the moment, and I'm still a long way from the end. I'm up to 60 hours now on the PSP version too, and I'm even further from the end as I've been playing it on Hard settings and you need to do lots more crawling. P3P is if anything better than the original - at first it seems to lack atmosphere because locations (apart from Tartarus) are all static and you just move around them with a cursor. However, this streamlines the experience a bit, which you begin to appreciate after a while. Also, direct control of the other characters is really handy, because the computer often doesn't think - I don't know how many times I managed to charm an enemy (using Marin Karin/Sexy Dance) only for the AI-controlled characters to attack that one instead of the uncharmed ones. Charmed enemies attack each other, so really you'd prefer it if the AI characters left them alone.

I can't see P3P appealing to everyone because the dungeon crawling is very long-winded indeed. If it gets its hooks into you though, it becomes hugely addictive.

P2:IS seems a bit clunky by comparison, not unexpectedly, but I haven't given it much of a chance as yet. I still haven't played with TiTS very much - I've had my hands full with P3P.

I picked up the PSP version of Lemmings yesterday.

It has all of the classic levels from the 16 bit era, albeit with spangly graphics. I just don't understand what's happened with thye music. It seems so dull and inappropriate, which is a real shame.

Still, the rest of the game's charm is intact and I intend to slowly crawl my way through this game.
Top

Havantgottaclue wrote: P2:IS seems a bit clunky by comparison, not unexpectedly, but I haven't given it much of a chance as yet. I still haven't played with TiTS very much - I've had my hands full with P3P.

Well, I know what I'd rather have my hands full with

Joking aside, I have both of those recent collectors editions too and I've only got as far as unsealing them to have a look inside. Just bought them while they were available because the extremely limited release makes me think they might be tough to get hold of in the future.

Besides, I'm plugging away at P3P myself too at the moment. I must have spent around 100 hours on the original PS2 game then another 130 completing the FES update when that came out so I must be nuts doing the same again with the handheld edition

. Brilliant game though and Persona 3 FES was one of my favourite PS2 games so any excuse to play it again is welcome. Playing as the girl this time to at least get some differences in the dialogue/social links etc.

I didn't really like the cursor-orientated navigation at first (after getting used to the free movement of the original games) but after a while, it becomes quite nice, streamlining the 'getting to places' (as Havantgottaclue said) while not losing any of the charm.

Why the bloody hell are games like Paroduios and Twinbee so damn expensive?
I want to own them, but its making the dodgy way seem attractive
*The Nights of gaming *
My inane prattle * Youtube page* I also have arty stuff for sale *
Top

Mind if I ask where you got P2 from? Only place I can find it in stock is play.com and they always send stuff out in jiffy bags, so it's bound to end up a wreck if I order it from there.