From The Forum Issue 211

From The Forum Issue 211

some kart game that no one remembers
batman begins
alien3
doom (the last game i bought for it)
international superstar soccer + delux
mortal kombat
nba jam
pilotwings
sparkster
star fox (played on that "super weekend" edition too, can't get that bloody tin open because it's RUSTED SHUT

and a lot on emulation including a small wrestling game ... FIRE PRO WRESTLING X PREMIER TRANSLATED ...

sad story
i was setting up doing a simming competition using this, and then decided to created something unusual, like a web comic of some sort.
so i set about screenshotting the game and separating EVERY single element, editing them a bit, so i could put them all together and make crap up storywise and creating custom elements too!

here's some i made earlier and totally not blowing trumpets here, i probably have posted all before here ... 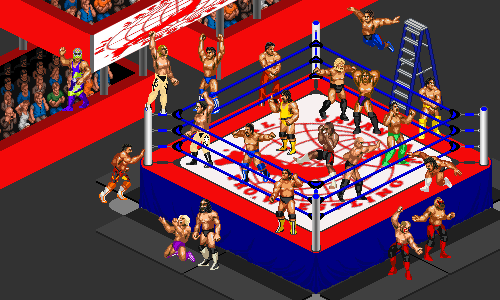 i absolutely LOVED doing all that, but alas an accidental drive wipe ended that :sadface:
all inspired by the little animations that fans were creating

and i even saw the boxed game once, up on a high shelf in a small games store

wot
no super mario world? ... well it was the pack i got but i was rubbish
metroid?
zelda?
street fighter2?
final fantasy?

at the end when i traded it all in i had eleven games ...

It should be Secret of Mana because I enjoyed the multiplayer RPG experience with my brother so much. But, Terranigma is not only my favourite SNES game but my favourite ever game. A brilliant and immersive story, great gameplay, superb music, different and interesting worlds, great-looking bosses, and I loved furnishing my house at a time when that was a unique thing in a game. I bought Terranigma from a friend for £7 and soon felt like I'd ripped him off. It was right up there with Mario 64 at the time I was playing it.
https://NotTheCakes.bandcamp.com
https://www.instagram.com/alexharford.uk
Top

I think that's 8 more than we ever had.

I still love Mario All Stars though, can I have that as a game? The Mario 3 in that is pretty much perfect, so much so I'm thinking I need to introduce my grandkids to proper gaming controllers using it this week (they arrived from Spain for 3 weeks today).
The Retro League - Where skill isn't an obstacle
Retrocanteen, home of the unfairly banned

Might as well ask ask me to pick a favourite child lol. I guess DKC 3. The graphics, the characters and the music were the best in that series for me and has more collectables which I love. Or Sm world. Or Bomberman 2.

I never had the SNES in the day, being a Mega Drive man. But now I have the Mini SNES I will have to pick off that!
Top

Ooh... Is it CASTLEVANIA IV? Is it ZOMBIES ATE MY NEIGHBOURS? Is it SHADOWRUN? You know what? It's FINAL FANTASY VI (or III, at the time of its Western localisation).
Yes, I have no love for Mario.
Top

Ghost Chaser Mikado bought this after Super Play reviewed it. I still have my original copy I payed £30 for

Run Saber Strider on the SNES with more 7 bosses and a female character. I still play this loads on my Analog SNES trying to 1cc it the animation is class how her hair flows behind her as she jump kicks.

Street Fighter 2 was the reason I got a Snes. The console bundle seened such great value compared to those earlier grey imports of the game, although the official UK release was pretty expensive too, iirc. Anyway, it was my favourite arcade game at the time, and the Snes conversion was essentially perfect. Even as a kid, it was at that moment I realised the arcade's days were numbered.
Top

Chrono Trigger. Around 1999 I had never played an RPG before, I tried loading CT and I was hooked to it for hours. It was the start of my love for JRPGs.

Another vote for Batman Returns.
Top

Damm didn't make it this time, my fifteen minutes of fame will have to wait till another day.
Top
Post Reply
15 posts • Page 1 of 1