Now then if you like the look of the retail cover....maybe I could swap my retail copy for your subscriber copy

I am not all that sure that having separate covers is a winner...
Top

) are treated stepmotherly I guess. Only the regular front, no extras of any kind... Sigh. Like last edition when other loyal subs got a CD. We got no mp3 or anything. It's just not right.
Top

I prefer the Subscriber cover, not surprised that RG is now going down this route as PC Gamer have been doing it for a long time and they are also owned by Future Publishing.
Top

) are treated stepmotherly I guess. Only the regular front, no extras of any kind... Sigh. Like last edition when other loyal subs got a CD. We got no mp3 or anything. It's just not right.

) are treated stepmotherly I guess. Only the regular front, no extras of any kind... Sigh. Like last edition when other loyal subs got a CD. We got no mp3 or anything. It's just not right.

Yeah but it's a bit of a straw man from your side:) he's talking about getting the digital version of the same album - through the link to Bandcamp or something similar. Of course digital subscribers don't expect physical CD to arrive by snail mail

And being digital they could get both covers and posters (maybe in the form of desktop wallpaper or as a background image for the phone/tablet).
I think these are valid expectations but sadly digital subscribers are not treated to the same standard.
Top

Oh I don’t know. Have you seen the subscribers cover for this months Edge? It’s lovely.
Top

Wow, great edition, loads of stuff I'm interested in, Powerdrift, Renegade III, C64 games system, Ken Williams interview.. just started reading, first thing I started reading was the Powerdrift conversion capers and the Amiga port always seems to get a bad rap but I personally think they did a great job. On some levels it does get a bit too busy because things are thrown around at a speed the machine cant handle at a frame rate too high but the arcade machine was just insane and I love the fact that they just went for it on the Amiga. That's what I would have done too, and for me most of the levels pay off, nicely. So I don't get why it gets bashed as it does, I reckon they did a fine job with what they had.

Have to read the article now.

Please don't give them ideas!

There were indeed four variant Pokemon covers for issue #135. The Pickachu cover was exclusive to subscribers (the only previous subscriber variant) while the other three were issued at retail in equal quantities.

There were two Mario Kart covers for issue #167, but these were split 50/50 at retail and (I assume) it was random which one you would receive as a subscriber. 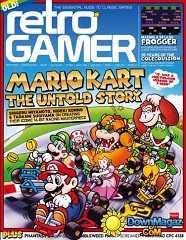 What’s interesting is that the only previous subscriber cover (#135) caused a bit of a stir at the time. In his editorial Darran wrote that: ‘While three of the covers are out in the wild, you’ll only get our awesome Pikachu cover if you’re a current subscriber. Needless to say we’ll be doing similar things in the future, so be sure to take out a subscription.’

However, nothing came to pass.

There was a fair amount of negative reaction online by some readers and I’ve often wondered if some of the editorial staff leant on Imagine Publishing not to pursue this route. It was suggested that here was a magazine by and for retro game collectors, which was (arguably) simultaneously exploiting them.

I’m sure around this time there was also a printed story of a retro game collector whose (collecting) addiction was causing very serious problems (financial and emotional) with his family and I recall Darran being very sympathetic to his plight, which may have affected Imagine Publishing’s decision not to continue.

It’ll be interesting to see if this return to subscriber covers is an experiment by Future Publishing (depending on reader reaction) or whether such a publishing ploy is here to stay.

Well my search for the missing subscriber edition cover ended in an ebay purchase but I wanted to pass on my special thanks to Darran the editor. I contacted him in desperation and he kept in touch with me personally. Today he got hold of the magazine for me and one of his colleagues then contacted me for my address. Darran’s level of attention and his kindness when exchanging emails made me feel glad to have supported the magazine over the years and Inlook forward to continuing to do so. Top man!
Top

Just enjoying reading through my copy now. I'll be setting up Chaos Engine and Power Drift later - thinking the CD32 and 3DS versions should do the trick.

I'm not overly bothered by the cover artwork being different between the subs and the retail versions of the mag. Seems like an unnecessary extra expense to differentiate them - not sure it would impact sales either way. I'd rather you just put those printing and design costs over the course of the year instead towards a RG Subscribers Partaaaay.

Marko/Al Murray could provide the venue (and plenty of free booze of course!)
Top

Really enjoyed this issue myself, there were lots of little nuggets of information I did not know.
merman1974 on Steam, Xbox Live, Twitter and YouTube
Top
Post Reply
36 posts