Most type in memories are of the Apple iie in school. We typed a few in from C&VG magazine which in those days was a superb magazine.

In the main they worked - though typing in a text adventure was an odd thing to do as it gave away how to solve it quite often so it was something you did for others' benefit - so it was never done!

Anything that had a lot of POKE statements in it normally spelt trouble because if there was a misprint we had no chance of fixing it - we did fix a few BASIC bugs if I remember right - more syntax errors than bugs though.

i remember a game called "The Game of Goal" that was implemented in the Apple's lores mode. It was a grid of squares and you took turns to move a square from cell to cell (the computer played against you) and the winner moved the square out of the grid. It was subtitled as a mathematical maze and the CPU was really hard to beat. I can remember our headmaster getting involved trying to beat it and we learned a lot from him about logic and gaming as he tried to figure out how to beat it. Good times.

We also typed in a really neat game that had 2 levels - first was a flight through a tunnel that got narrower and narrower and when you got to the end of that you went to a level filled with obstacles to avoid and pickups for points. There was a point in the level where there was a wall of obstacles and maybe there was a way past, or it was a bug/mistype - or the end - we never knew - but it was really well done and very playable.

Typed in a version of Hunt the Wumpus on the Oric-1 which worked OK. I had also had a pretty fat book of type-ins for the CPC64 - which had a screenshot of the boss from Demon Attack on the front which was misleading as to the content of the book to say the least! I remember doing some of those but can't remember the detail of many - there was a sheep herding game that was quite addictive.

At that point I started doing my own and coded a really neat Video Poker machine game. It was far better than any type-in game I had ever tried - in fact my brother thought I had bought it. So I sent it off to a magazine but it never made it as a type-in. It was probably too long...

Later type=ins of CPC464 games came with a short program you typed in first that generated checksums for each line that were shown in the listing in the magazine that helped a lot - was a neat idea.
Top

The Oric-1 and Atmos computers has some excellent type-in games, quite often better than a lot of commercial releases. The best magazine out there for type-ins was the French magazine 'Hebdogiciel' which spread it's huge listings over several issues. I think the best UK mag was 'Your Computer' which also had many excellent Oric games, 'Hero Zero' being a stand-out.
Top

yep your right Mr Porkings, I tried in on my Apple II and that's what I got

Now then, my first computer was the beloved TI/99-4A, and I have been actually typing in listings and saving them as ready-to-run files for the Classic99 emulator.

I have many happy memories of sitting in the upstairs room with my dad, him with the listing and a ruler, reading it out, me typing it in, line by line. They usually worked first time.

In fact, if you look at this picture here, go over to the right hand side, the pages with the heading "You're the only one who can save our planet"... when typed in, that's this game here, "Last Stand" by Vince Apps. 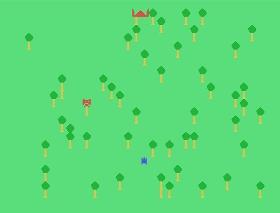 I've got a load more to do, but unfortunately struggling for time at the moment. I really do intend to get the website going again though.

Seems to be a lot of Apple IIe type-in memories...I just finished read Jordon Mechners book "about beginnings of the 'Karaeka' game development"
He started off on type-ins too...ZX basic was slow but so easy to program with (in 128k mode that is!)
I recently did a flappy clone using zx spin... did it in under 100 lines and surprised myself how much I still remembered...

The best one I remember was one of those "Five Liners" they had in Atari User. It was a simple game (well, for five lines of code it wasn't going to have any Metal Gear-style cut-scenes in it!) where you controlled a 'V' left and right with the joystick through a scrolling randomly-generated cavern that got progressively narrower.

I used to steer well clear of the machine-code ones where you had to type in strings and strings of numbers. You were guaranteed to mistype one, or for there to be a mis-print!

Remember typing in quite a few of these - mainly from Amstrad Computer User.

Two that stick in my mind are 'Trench Attack!' (Star Wars rip off) and 'Monsters Final Hour' (text adventure)

My elder brother would read out the endless data statements, and I would type them in. Always an exciting moment
when you finally typed in Run at the end.

I wrote a really good art program for spectrum zx basic... I did a few on Amiga also, but the quality of Amiga games and my BBS via modem (phone bills remember phone bills!!) kept me away from coding much.

The other were dodgey platformers or my 16 x 16 room-based, Lord of the Rings (a text-based dungeon crawler) you moved from room to room and if Legolas was there and you were a hobbit u were okay... but friendly attacks were quite random too.
My brothers and I had fun playing that one! I added the whole family into it.
The Micro Kids: An 80s Adventure with ZX Spectrum, Commodore 64 and more
https://www.amazon.co.uk/dp/0993474462/

I also recall typing in a little program by Andrew Braybrook for the C64 from Zzap 64 magazine.

It was a clever little piece of code that promised to double the speed of the the cpu.

Amazing stuff. Well worth trying in my opinion: http://www.zzap64.co.uk/zzap24/mental2.html

There might be an article in type-ins from famous names - the Olivers, Jeff Minter, Mike Singleton. There was an issue of one magazine with several games written by established names.
merman1974 on Steam, Xbox Live, Twitter and YouTube
Top

I recall Amstrad Action had an entire disk utility as a type-in - I think it had been intended to be put on the covertape, but there was a bit of an "oopsie" so they put it in as a type-in a few issues later.
Where logic won't work, I will
Top

ncf1 wrote:There were a few good ones, in a book called Apple Graphics Games, a couple of them were really pretty good - Spider and Pairs, as decent games as you would get outside of official releases anyway. But it took a long time and typing in many games before getting to those ones.

I tried typing in the games from this one and ended up not being able to get any of them to work. I eventually gave up and set the book aside. A year or two later, I came back to it and tried again. I ended up getting all of them to work the second try! This book was cool in that one of the type-ins was actually a really nice menu system for the games from the book.

Two others that I remember:

The other one I can't remember the name, might have been Nibble 500 or something similar. It was a first person racing for the Apple II, also from Nibble Magazine. It consisted of three type-ins as I recall. First up was a type-in that constructed the car cockpit graphic and saved it as an image file. Then there was a BASIC piece and a big chunk of assembly/machine code, if I remember right. An amazing game graphically for its time.

If anybody has screenshots of any of these, I would love to see them!
Top

On the day I got my ZX81 I really annoyed my sister. She owned a cassette player and I did not. As a result I spent the first 6 months of my ZX ownership typing in games from Sinclair Programs. This was initially scuppered by my complete lack of comprehension of what things like "<3*gh:4*i>:2*isp:g6>" meant. I kept typing in that sort of stuff and couldn't understand why the games didn't work. In the end I did find the key to these somewhere in the magazine. They were some way of describing the graphical symbols which I can't help but feel would have been easier if they'd just printed the symbols! The game that I played most was a knock off of Frogger, but there was also a 1K version of Kong (very tenuously based on Kong)

When the spectrum came along I didn't do that many type ins but there was an isometric game called Bubble Trouble that I made the effort for. It looked pretty good for so,etching out of a magazine but I don't remember if the game itself was any good.
Top
Post Reply
38 posts