Just got this through the door. Nice cover, based on Flashback. Hope someone can scan it in.

Apparently its Darrans 100th issue, so congrats, impressive milestone. Page about Revival and a few photos of it. Damn those giant Gameboys look superb.

Nice Flashback article, must admit i've never 'got' into this game much but i'm sure after reading this article i'll give it much more of a go on my ipad. Hey great stuff, article on Chequered Flag. Loved that game as a kid, think its aged badly, looks shocking but i remember playing this as it was one of the free games i got with my Speccy so great memories of this.

Guide to lightgun games, never got into these much but looks interesting.

Two page screenshot of Sagaia, have to give this shooter a play.

Flight of the Amazon Queen, never really bothered with this game before. Looks decent though

Mastertronic. This looks a great article, nice to see Caves of Doom get a mention. Looks an interesting article.

Defender of the Crown - Damn, nice month for me this issue. One of the first games i saw on my mates Amiga. This reminds me to download it from the app store. Loved these early years of the Amiga when i had it.

Desert Island Disks - Paul Norman, never heard of him but he was working for the enemy (C64

Good month for me this issue for sure
Top

Just received my issue, flicked through, not a single 8 bit computer featured (I like the hardware articles)

Another boring issue for me, just like last month.
Top 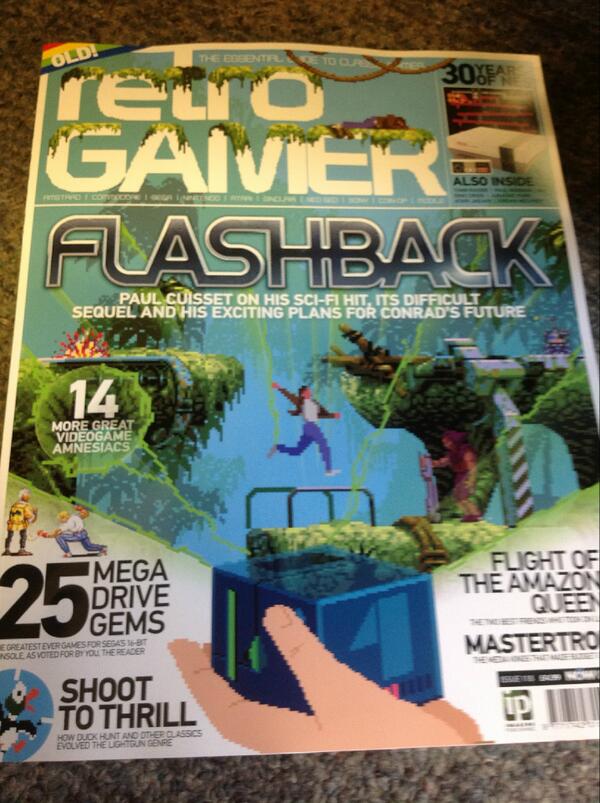 From that list I'm only really looking forward to the Mastertronic article, but RG never fails to surprise me, there's always an article or two that I end up enjoying more than I thought I would.

Theres plenty of stuff for 8 bit fans this month.

Any bits you do like ? Constructive criticism is good but looking at all your 3 posts they're all negative !
Top

marksmith34 wrote:Just received my issue, flicked through, not a single 8 bit computer featured (I like the hardware articles)

Another boring issue for me, just like last month.

There are plenty of 8-bit features. If you're expecting an 8-bit hardware feature every month, then yes, you're going to be disappointed. We only typically do one hardware feature a month, and can't just do 8-bit. Next month is a feature on the spectrum 128K, so hopefully that will be of interest to you

Another stylish looking issue, from the cover to the brilliant lightgun article. (Although I will point out the selection of games was different for each of the 8-bit computer versions of the Magnum...)

Really enjoyed Graeme's Mastertronic piece, the look back at Flashback and the Dino Crisis feature. And of course once again Paul Drury entertains with Desert Island Disks.
merman1974 on Steam, Xbox Live, Twitter and YouTube
Top

cover looks amazing.. congratulations Darran if it's your 100th issue, that's a fantastic achievement! well done mate. Thanks for all the great work.
Top

ncf1 wrote:cover looks amazing.. congratulations Darran if it's your 100th issue, that's a fantastic achievement! well done mate. Thanks for all the great work.

Haven't got mine yet but did see the cover, amazing! Looking forward to reading it.
Xbox Live: RetroBob
Top

Mine's just arrived - beautiful cover!
Suppose you were an idiot; suppose also that you were an XBox One owner. But I repeat myself.
Top

that is a damn good looking cover,congratulations Darran on the milestone.looking forward to picking it up.

I arrived home from holiday today to find RG on the door mat. Perfect! Glass of wine and feet up a bit later on. Oh, and that cover, I LIKE that cover

Congrats on 100 issues from me too.
Top

This is soooooooo not true.
“To gain your own voice, you have to forget about having it heard.” —Allen Ginsberg, WD
Top

Outstanding issue for me in the most part!

I might be a bit biased though this month as I appear in the mag 4 times (photo, 2 quotes and my own article!)

Seriously though I can't wait to give this a read. The Mastertronic article, Light Guns (even though the Atari gun is missing), Making Of Chequered Flag and Mega Drive top 25 being my personal highlights.
My Digital Books | Laird's Lair | XEGS Podcast
Top
Post Reply
99 posts