More genius on the TI99/4a
Top

My first video looking at some homebrew games for the Mega Drive:

Anybody come across or know anybody who has the Gryzor and chase HQ games for the Amstrad gx4000.

only recently discovered they were available but have no idea where to go for something like that.
Top

RodimusPrime wrote:Anybody come across or know anybody who has the Gryzor and chase HQ games for the Amstrad gx4000.

only recently discovered they were available but have no idea where to go for something like that.

Maybe here? thought I think their HQ2 cart has sold (not used the site so cant vouch)

Graphics update making some progress, added some flame sprites too:

I've created quite a few remakes in my days, one even got featured in this great mag that we all like!! L)

I hope you find this new thing I am working on interesting. I know that a C64 game probably will not make heads turn, especially when it's Tetris

, but I'm documenting the writing of the game with code examples and programming tips on a series of blog posts. 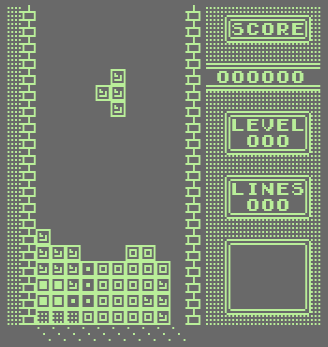 Maybe you guys find it interesting to follow the creation of a game, written in ASM on the C64... It's a very practical series of posts because it WILL deliver a feature packed game at the end. It's not a series of posts with examples of assembler language.

The source code for the game can be found on my GitHub repository here: https://github.com/wiebow/tetris.c64
--
My blog and free remakes for PC: http://devdef.blogspot.nl/
Top

I've been working on a port of my first remake, Atoms (Done versions for the DS, PC, Xbox 360 and Mobile).
This time I'm porting it to the ZX Spectrum.

I've had to reduce the number of players down to 4 from 6 that the my other ports have had.
but its been fun learning the ZX spectrum (I never did any decent dev back in the day), using a mix of C using Z88DK and asm.

As I've been adding new features to the game I've been updating the tap here https://dl.dropboxusercontent.com/u/115 ... /Atoms.tap
Top

Sort of - but I have created my own series of gaming tributes on twitter.com/@sinfulspectrum eg David Essex's Bare Knuckle.
Top

I have just released a new homebrew game for the ZX-Spectrum called SNAKE ESCAPE: Guide a snake through increasingly difficult mazes in order to escape and reach the food... featuring:
This game is based on a webgame called LIME RICK, although with a modified design. Many maze levels were "improved" from the original (hardest levels became even harder), and there are also 4 extra (extremely hard) new levels at the end. Can you solve them all???


NOTE: Play it on a ZX-Spectrum 128K model otherwise you will miss the AY music!

NOTE2: This game uses multicolor graphics powered by NIRVANA+ Engine, so it will work on all original ZX-Spectrum models without the need for additional hardware. It should also work on any accurate emulator, including the ZX Vega.[/quote]
Top

Ops! The version I uploaded earlier today had a bug, please download it again from the same link.

Sorry for the inconvenience!
Top

@einar - I've just had a quick play of SnakeEscape and it's superb. The graphics and sound are excellent and it plays nicely too. Well done

Been a while since I was last here, but I've just released a new game!

"In the Walls of Eryx" is a brand new game for the 128k ZX-Spectrum by Monster's Legs Productions, using Jonathan Cauldwell's Arcade Game Designer.

Inspired by H.P. Lovecraft and Kenneth J Sterling's short story (and with the kind permission of Arkham House), the game follows the adventures of Private Stansfield after he crash-lands in the Erycinian Highlands of Venus and combs the jungle for power gems. But the Venusian flora and fauna won't make it easy for him; neither will his dwindling supply of oxygen. And then there's the invisible labyrinth...can you collect 6 gems and survive In the Walls of Eryx?

Keyboard controls for the game are the classic QAOP and Space.

Collecting Gems will allow you to unlock gates.

Eventually you will come across a fuel pack for your Flame Pistol; there are
limited shots, so use them wisely!

Enemies include;
* The furious green Lizardmen who disregard their own safety to charge at you,
* Farnoth Flies that mindlessly patrol back and forth,
* Deadly Mirage Plants that cause hallucinations (multiple copies of yourself appear on-screen),
* Carnivorous Blossoms who lie underground, ready to devour the unwary,
* And the invisible Walls of Eryx themselves (marked by screens with magenta borders), designed to confound those who would dare to steal the Lizardmen's revered power gems.

The game can be downloaded here.

Hi guys, this is my in development C64 shmup

Take a look at my latest video
https://www.youtube.com/watch?v=u40_7qwV5RY

Let me know what you think