From the forum issue 101

Grannie's Garden is about the only game I can remember playing a lot on BBC...It was a lot of educational school computer nonsense, but it still managed to stick in my memory enough to find out what it was called years later! 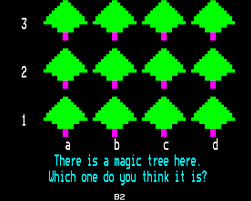 School mate had a BBC. Planetoid made me jealous. What a killer Defender!
Top

The Beeb had some absolutely cracking clones of arcade games (Defender, Donkey Kong, Asteroids) with bright colour and great sound effects. But with so few home users it never got more than a handful more of great games over its lifetime.
Top

Granny's Garden! I was the first in my class to complete it at primary school.

deadpan666 wrote:Grannie's Garden is about the only game I can remember playing a lot on BBC...It was a lot of educational school computer nonsense, but it still managed to stick in my memory enough to find out what it was called years later!

Granny's Garden, is certainly a winner.

But Candyfloss is where the money was. That game was like liquid crack, to the extent I still play the Lemonade Game online now.
The Artist Formerly Known as Ralph Milne's Left Foot

Planetoids for me, arcade perfect clone of Defender. The sound was spot on. Fast and deadly, yet when mastered, or at least half decent, you got a real buzz from racking up a big score.
Sometimes you need to say what needs saying, most times you just need to shut up and listen.
Top

Harrier Attack - Addictive gameplay and the sound is fantastic, well thats what I thought at the time anyway. Really enjoyed bombing buildings as well as the enemy.
Top

I would have to throw in Stock Car and Dog fight, or was it bi plane? Both great multiplayer fun..

Was Felix in the factory on the beeb? Or was that only on the Electron..
Top

My favourite game back when I was a kid has to be Planetoid - for the time it was an amazing recreation of Defender and no other version came close until a few years later when Guardian was released on the C64, but Planetoid was still better 'cos you could bash the keys harder on a school Beeb .....

These days I don't play Planetoid at all as I have an original Williams Defender machine in my office, but I play Elite quite a bit

Note Invaders. The only thing that made Music theory lessons bearable.
Top

Grannys Garden. Solely for the fact that playing this at school as a 5 year old introduced me to the idea of playing games on a home computer. Dammit, this game has cost me thousands of pounds!!!!!!
NES/N64/GC/Wii/WiiU/SMD/SS/DC/PS1/PS2/PS3/PS4/Xbox/360/OneS/PSP/3DS/PSV
PSN: learnedrobb
Top

Near perfect conversion and shows the strength of a much underrated Computer.
Retro Podcast

I choose Repton 3 as my overall favourite. For me, Repton is to BBC Micro as Mario is to Nintendo.

Talking of programs generally, rather than games , I have fond memories of one that played a tune called 'Cold Tea'. It's engrained in my mind and hearing it time-warps me back 25 years. Here it is: http://www.youtube.com/watch?v=X374F0dhIks
Top

A toss up between Spellbinder and Ravenskull , remarkably atmospheric for 8 bit games, any game for that matter. Elite goes without saying.
"By what name are you known?"
"There are some who call me... 'Tim'...?"
"greetings, Tim the Enchanter."
Top
Post Reply
68 posts