From the forum question for issue 25

Blimey. After this morning, I'd have to be Eric from Eric and the Floaters...
Top

My username kinda gives this one away for me!

Gotta be Questor the Elf for Gauntlet - I'd love to be able to shoot food, and have a weird eerie voice berating me for doing so!

I'd have to be Miner Willy

All those empty bottles around my house - would have been great emptying them but i'd have to say "Oi, Maria! i pay you damn good money to be my housekeeper now get out of my bedroom and do some housekeeping and when you've finished i'll be on my yacht chillin

I would have to be one of the dudes from "Growl" ..

I have having fists, whips, knives, guns, swords, grenades and some awesome flying kicks at my disposal to knock off evil do-er's (some of which look uncannily like traditional Dutch windmill workers !) would be great ! .. also you are saving animals ! ... so win-win !!!

... and it has the added bonus that if one of those foxy looking charlie angels look-a-likes would just for one moment stop trying to kill me with a grenade ... We might just be able to get it on

Jetman from the Jetpac/Jetman games. My life would be complete if I had a jetpac!

The announcer (God) in Intelligent Qube.

Tormenting one soul at a time....

Harvey Headbanger - Having more poise, balance and control the more alcohol you sank would be great, rather than the falling over, dropping your kebab and waking up in the morning with a tongue like a badger's scrotum as usual.
Still the Galaxy's Greatest Comic!

Any of the customers from Tapper (the Bud one, not girly Root Beer Tapper).

Lieutentant Raikov from MGS3, for reasons I will not dare go into...
Top

the guy from renegade 2 cos then i could have a bad ass 80's mullet and kick fat blokes off bikes!!!
Top

1) to have a sexy girl to kiss, like her 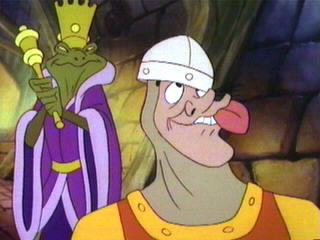 Sonic! Just imagine it, being able to sprint at those speeds. You'd never need to catch another bus or take another train again! And you'd be hated at school sports days!

Would have to be nights, just kind of lazing around in the sky, none of this busy having to save people super hero stuff that blights superman, just flying about with the occasional hoop roll, Nirvana
Just where is Mickey T?
Top

...or maybe Darth Vader... in the '83 Star Wars game : He's always escaping after the destruction of the death star

one of the many amazing ficticious foriegn players from Championship Manager 93-94. A team with the likes of one of the 17 Nilson's on offer was tough to beat.
'Let his name be praised' - Lo Ray, Body Blows.
Top
Post Reply
76 posts