Re: Free stuff in cereals and crisps...

Raided a scrap Lada in local scrap yard in North Wales and found one of these still in it's packet: http://i.ebayimg.com/t/RARE-Walkers-Monster-Munch-Tazo-No-29-4-points-Pink-Monster-/00/s/MTIwMFgxNjAw/$(KGrHqNHJCcE7y+!J0uMBPHCgWq!kw~~60_35.JPG Believe it's from 1996, which is probably how long the ...

I typed my first program into a TI-99 Texas Instruments from the green manual you got with the machine - it was my brother's, and we had fun doing one before this and I couldn't believe how 'easy' it was to program a machine. I spent a couple of hours typing it in, and when it didn't work I tore out...

This will be a logistical challenge! I'll get the whole lot out tomorrow and get everyone's wants sorted out, whoever asked first gets what they asked for. :) PC games are pretty much all the ones they did since 1991/2 (like Armourgeddon / Hired Guns, etc) to Ecstatica / City Of The Lost Children / ...

I'll post up the ones I find as I go along, I'm emptying a cupboard which has so much random magazine based literature, I'm running out of space to transfer them to!! I'm meant to be tidying and I just end up reading stuff instead. http://farm7.static.flickr.com/6089/6028481939_0fca72452b.jpg Amiga ...

Postage would be about 10 - 20 quid courier for the load!

I've got a huge amount of old magazines from the late 80's onward (to 1995). There are quite a few Zeros, loads of ACE magazines. Also CVG, PC Format, Amiga Action, GamesX, Amstrad Action, etc. These are getting recycled as they're in my folk's house and they are moving (after 20 odd years). You'll ...

Re: The Oliver Twins interview, Monday 11th of July 9am

There's a picture of them on a mk2 MR2. I remember a picture in a magazine of one of the Darling brothers next to a mk1 MR2 a bit earlier on.

I'm a big fan of 'authentic' RTS games (no Warhammer or Red Alert, etc although I'd probably like them anyway). There's a decent amount of these games coming from obscure places in Europe and I discovered the D-Day stuff from Monte Cristo Studios and loved the simplicity of it, and of course the Com...

Re: RetroActive - Robocop Vs Tremors

I thought Tremors would be an excellent idea for a video game translation, in the same way they did with The Thing game.
I love Tremors, but Robocop is just as good. A horrible, unanswerable question!!

I've encountered this a couple of times. I would've thought the price on the website is set in stone, but going into the shop three times, I've been knocked down quite a bit (45 - 30 quid on PSP and 37 to a truly miserly 20 quid for a boxed, complete Wii). What with me being an ex-trading standards ...

jdanddiet wrote:I think Apollo 18 is the sequel to Apollo 17.

Think it's about a space crew that went missing or something.

The Thing 2 sounds awful. The first was about the atmosphere, and also spooky Ennio Moriconne soundtrack. And no offence, but no pretty women just because it's politically correct.

Re: The death of the joystick?

This was my favourite joystick - Cheetah Mach 1: 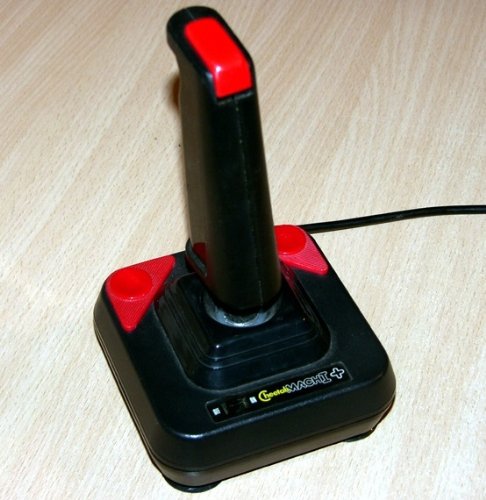 It had microswitches and my mate sold it to me after owning it for about five years. Top buttons were useless, but base buttons did the job. I do miss them!

Re: I love PSPs

Re: Bill Murray is a Legend

I downloaded Groundhog Day a couple of weeks before Christmas (as well as some Chevy Chase and other SNL related films), and it's such a classic, under-rated film, I love it!
Search found 355 matches